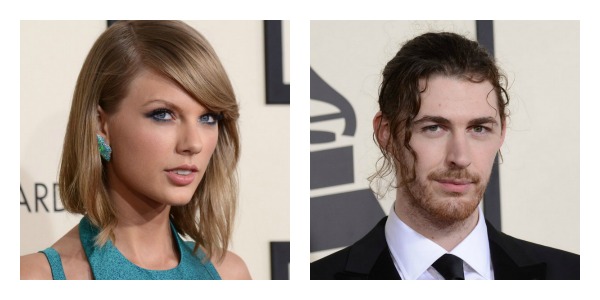 Taylor Swift might finally have a new boyfriend, y’all! Even though Taylor has remained single for the better part of the year – barring a few hookups and temporary boyfriends – she has reportedly found herself a new boytoy: ‘Take Me To Church’ singer Hozier.

Take Me To Church has literally been dominating the radio charts for the past month, and Hozier is a BIG deal right now. So OF COURSE Taylor jumped on him the first chance she got, especially since he’s cute, a hipster, and right up her alley.

The two reportedly hung out at a Haim concert in LA a few days ago, but the rumor mill didn’t start churning until they were spotted hanging out at the Grammy parties this past weekend. According to E!’s sources, Taylor also ‘kissed‘ Hozier several times on the cheek, which everybody obviously noticed.

The sources also claim that Taylor and Hozier hung out together the entire time, until the wee hours of the morning.

In other words, Taylor Swift has finally got herself a new boyfriend – or at least, they’re well on their way there. It’s likely that Taylor and Hozier are already hooking up, but they’re probably trying to keep it on the down-low to keep it away from the media speculation. Of course, Taylor will probably have to be more careful, because kissing someone on the cheek and spending all your time with them at an afterparty is tantamount to admitting a new relationship – especially in Hollywood.

What do you guys think about Taylor Swift and Hozier dating? Do you think they make a cute couple? And do you think they’ll actually last, or will they end up ‘breaking up’ within the next month? Let us know your thoughts in the comments below.