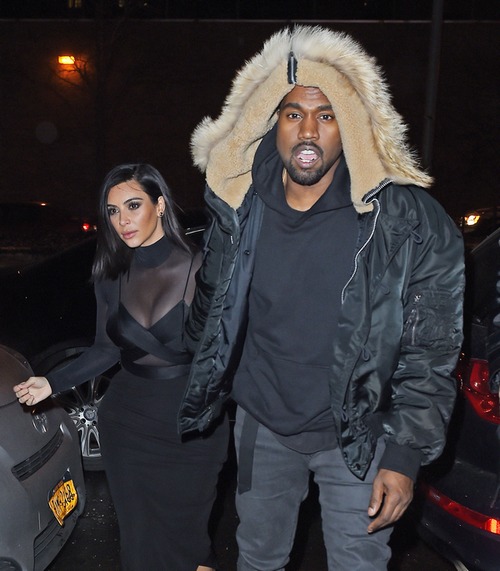 Kanye West is a big-name rapper in the music world, probably in the top five most famous artists in that genre. However, his relationship with Kim Kardashian definitely took his prestige down a notch. After all, Kim is a D-list reality TV star, no matter how famous she is – and Kanye is supposed to be one of the most talented rappers in the music industry. Mismatched in terms of talent, sure, but not in terms of famewhoring ability.

Anyway, Kanye recently revealed in an interview that he lost a lot of ‘friends’ when he started dating Kim Kardashian. He admitted, “[As] soon as we started dating, fashion people were really opposed to the idea of reality stars. And all the relationships, the somewhat friends that I had somewhat built up, completely turned their backs on her and me. They already had their back to her, and now they turned it to me.”

For a second, I was sure he would mention Jay-Z and Beyonce, because they’re the highest-profile people he knows and we know how Beyonce feels about Kim... But alas, Kanye would never betray Jay-Z and Beyonce that way, not if he doesn’t want to be blacklisted from the music industry completely. Instead, he’ll talk vaguely about some ‘fashion people’, even though their derision towards Kim clearly didn’t last. Anna Wintour may have hated Kim Kardashian once upon a time, but she – just like many other ‘fashion people’ – have changed their tune completely.

What do you guys think about Kanye’s comments? Do you believe that he lost a lot ‘friends’, or were people just turning their back on him because of his association with the Kardashians? Or both? And have those ‘friends’ continued to ignore Kanye? Let us know your thoughts in the comments below.