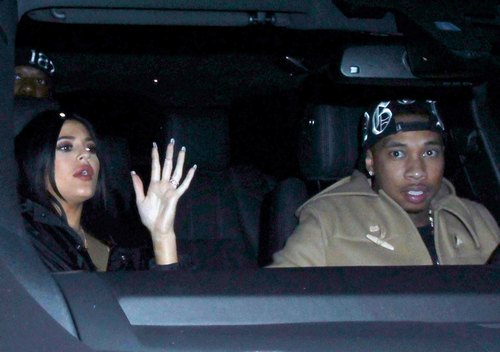 Tyga has come under a lot of fire for his relationship with Kylie Jenner over the past week, largely due to the fact that Tyga is 25 years old and Kylie is only 17 years old. Amber Rose, in particular, has been spotlighting the relationship heavily this week, criticizing Tyga for dating someone so young and immature.

However, Tyga denied allegations that he’s dating Kylie Jenner in a new radio interview with 105.1, explaining, “No, I’m not dating Kylie. I’m not dating that, so I just wanna get that out the way. I wanna be clear to everybody that I didn’t leave my family to be with Kylie, you know what I mean? That’s ridiculous.”

Right. It would be easier to believe him if he and Kylie weren’t spending every waking minute together. Plus, they get photographed fairly frequently, looking very cuddly and relationship-y. Even after all that, Tyga has to be a moron if he thinks that people will believe that he and Kylie Jenner are just ‘friends’.

He also added that Kylie’s family has no problem with them hanging out, explaining, “It wasn’t weird to nobody in her family, really. I think [Kylie] is a beautiful young woman, and I think she’s, you know, her maturity and mentality is different than a lot of people. You know, I hang out with her and her sister. We’ve got a group of friends and we all hang out.”

Well, of course Kylie’s family has no problem with her dating someone 8 years older than her. I mean, if they were fine with releasing Kim’s sex tape to the whole world, I assume they would be fine with Kylie and Tyga dating. Plus, eight years is probably not even a big deal to them, especially considering some of the age gaps of the other relationships in the Kardashian family.

What do you guys think about Tyga’s comments? Do you believe him when he says he’s not dating Kylie Jenner, or is he lying? Let us know your thoughts in the comments below.