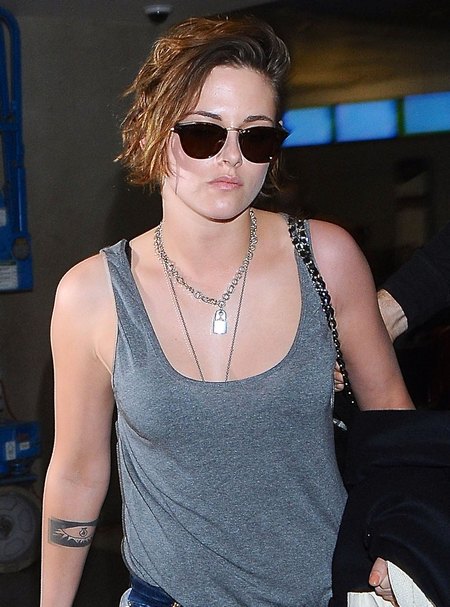 Kristen Stewart has always been blatantly disrespectful of the Twilight franchise, but perhaps not as much as her ex-boyfriend, Robert Pattinson. It’s always been very obvious that neither she nor Rob respected the Twilight series all that much, and they always knew they were making tripe.

However, perhaps Kristen got a lot of grief for her comments in the past, because she has definitely changed her tune. In an interview with Interview Magazine, Kristen actually [shocker] praises the Twilight saga, explaining, “Anybody who wants to talk sh*t about Twilight, I completely get it, but there’s something there that I’m endlessly, and to this day, f*cking proud of. My memory of it felt — still feels — really good.”

Well, she doesn’t completely praise it, but this is as good as it’s going to get. She admits that the movies weren’t a bastion of quality or great storytelling, but she’s also able to admit that she had a good job making it. And I mean, why shouldn’t she? She met her boyfriend on the set of that film, she made some solid friends during filming, and they made a ton of money. Plus, she can’t exactly go around dissing the movies now, not when her public perception is already in the toilet.

What do you guys think about Kristen Stewart’s comments regarding the Twilight Saga? Do you think she’s only saying what she’s saying because she wants to correct the image of her as being ungrateful? Or does she genuinely mean it when she says she’s ‘proud’ of the films – or maybe she meant she’s proud of what the films did for her career….

At the end of the day, Kristen’s career still hasn’t recovered from her cheating scandal, so perhaps this is just a way to fix her public image. Let us know if you agree in the comments below.