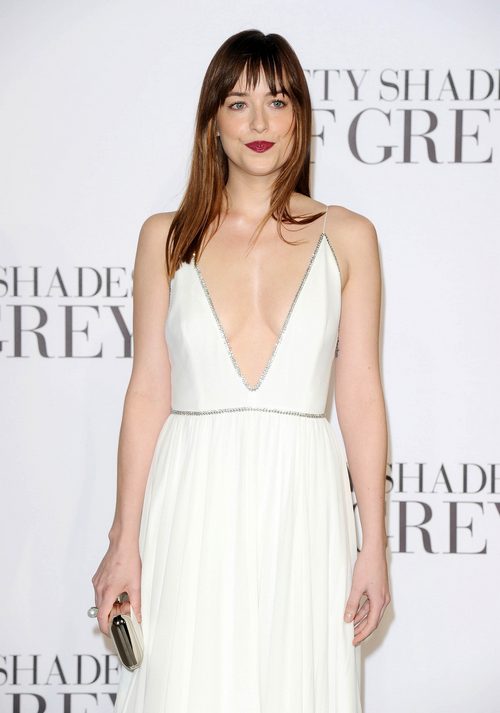 To be fair, there are many people who have done significantly less and don’t warrant an invitation – and yet, get invited every year. E.L. James probably thinks that writing a book series that sold 100 million+ copies and producing a film series that has already made $400 million+ worldwide is reason enough to ask for an invitation – but will Anna Wintour acquiesce?

A source tells Page Six, “With the success of the ‘Fifty Shades’ movie, she feels this is her moment. She wasn’t invited by Vogue, so her representatives are asking around … to find someone who has a table to invite her to the gala.”

The source also adds, “It’s likely that Dakota will be going, and James wants to be at the gala, too. ‘Fifty Shades’ is her creation.”

Yes, but Dakota Johnson is the face of the film, an actress, and also the daughter of two well-known actors. Also, she’s already made a fashion statement during the Oscars, and she’s clearly become a muse for several designers – something that E.L. James is in no danger of doing.

At the end of the day, it all comes down to image – and while E.L. James might be a multi-million dollar author/producer, she doesn’t exactly look the part. And that makes a big difference to people hosting the MET Gala, all of whom are notoriously superficial about who they let into their big night. Usually, it’s only skinny models and actresses, and E.L. James is neither.

What do you guys think about E.L. James wanting an invitation to this year’s MET Gala? Let us know your thoughts in the comments below.