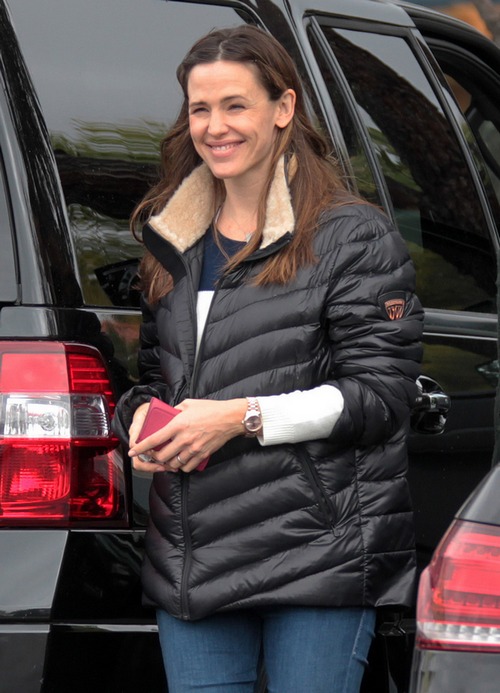 Jennifer Garner is usually a staple at every year’s Oscar, especially with Ben Affleck’s newfound clout with the Academy. However, on the morning of the Oscars, Jennifer took her three children, Violet, Seraphina, and Samuel, shopping to the Farmer’s Market in Pacific Palisades, California. Dressed in simple hair, a black jacket, and blue jeans, Jennifer Garner looked flawless and stylish, all the while sporting what appeared to be a completely make-up free face.

Obviously, Jennifer has the time and money to take care of her face, and get all the high-end facials that we regular plebeians can’t afford. Even then – especially knowing that several other celebrities have terrible skin – seeing Jennifer’s flawless complexion is a unique thing in Hollywood. You’d think that raising three children – especially when most of them are still young – would take a toll on your health, your weight, and your skin – but alas, Jennifer Garner is proving us wrong.

While Jennifer Garner was absent from this year’s Oscar, it’s unlikely she’ll stay away from the Dolby theater for long. Her husband, Ben Affleck, already has several projects that could take him back to the Dolby as a nominee – even next year – and Jennifer Garner will surely be asked to present an award sooner or later. It’s even possible that she’ll head to the Oscars as a nominee, considering that she has a fairly packed filming schedule for the next year or two. Plus, she and Ben have traditionally traded off on working so that one of them could always spend time with their children, so it makes sense that she would take a break while Ben focuses on his career.

Jennifer’s usually always a staple at the Oscars, so it was strange not seeing her this year – especially in the fashion round-up that most websites conduct. Hopefully, she’ll be back at the Oscars next year – whether as a presenter, nominee, or Ben’s plus 1 – wearing something shiny and fancy, and obviously, sporting a flawlessly made-up face.