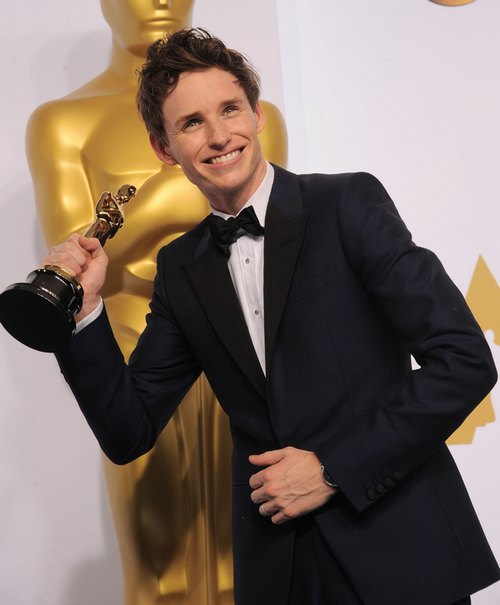 Eddie Redmayne beat out initial favorite Michael Keaton to win Best Actor at the Oscars last night, for his brilliant performance as a young Stephen Hawking in a ‘Theory of Everything‘.

When awards season first started kicking into gear last fall, many people predicted that Michael Keaton had the Best Actor award in the bag for his much-buzzed about performance in Birdman. In fact, Keaton won all the initial awards and all the initial buzz, without anybody even mentioning Eddie’s name. Most people’s consensus at the time was that Eddie Redmayne was too young, and that Keaton had this in the bag. Heck, even Benedict Cumberbatch was placed ahead of Eddie in most Oscar prognosticators’ ballots and choices.

But my, what a difference a few months makes, no? Michael Keaton didn’t campaign, thinking his win was a sure shot. Benedict Cumberbatch made several political faux paux, calling African American actors ‘colored’ in an interview. And Eddie Redmayne went around, charming people life, right, and center. So of course he walked away with the Oscar, beating out several contenders for one of the biggest awards of the night.

Eddie did thank Stephen Hawking and his entire family during his acceptance speech last night, and he made it a point to mention that the award belongs to them, and that he was just the ‘custodian’. He also thanked his new wife, Hannah Bagshawe, and mentioned that they would have a new flatmate to share their apartment with – and although many people thought he was referring to a baby, it’s clear he was talking about the Oscar.