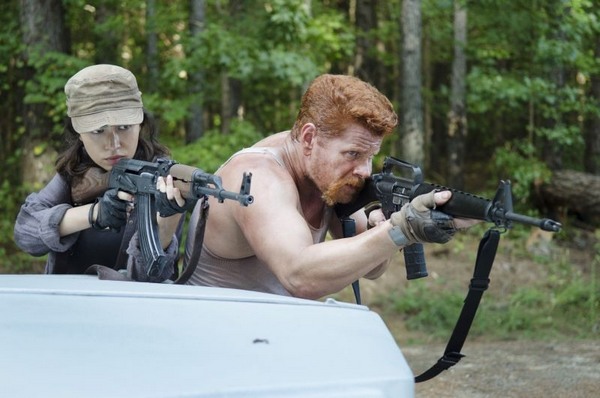 Sasha and Maggie bring their plus one to the barn for a Rick like interrogation. Sasha and Maggie took his weapon. Rick is told he was alone. Carl his handed Judith. Rick heads over to make it clear who is on charge. He ask for the weapon and his handed a gun which he proceeds to take and put on his person. Rick ask what he wants. Sasha tells Rick Aaron has a place close by and wants Rick and co to jump through his imaginary hoops in order to get in.

Aaron pops up and says Sasha has it all wrong he thinks that they would fit in nicely but, of course, he knows that isn’t his decision to make. Aaron explains it’s he has been issued the task of getting Rick to come back with him. Rick pretty much has a look that says ain’t that a bitch. Aaron ask Sasha to hand Rick his bag pack so he can see a picture of his community. When Aaron brings up the fact the picture quality is poor Daryl feels to point out that no one really gives a shit. Aaron quickly agrees. The picture is of a fence that is held up with thick sturdy poles. It’s approximately fifteen feet as made out is solid steel in case you wondering. Aaron emphasizes that nothing gets in it or out it without their permission. Aaron is in the middle of his come to our side we have cookies bit when Rick knocks him out.

Michonne questions Rick’s logic. Rick says that they are coming for them. They go through Aaron’s bag and find a flare gun. Eventually after his hands being tied behind his back Maggie gets him to wake up. Rick knows what the flare gun is for and ask Aaron how many he has out there. Aaron ask of matters. “Damn right it matters,” says Rick. Aaron points out it could be two, eight, forty-four, whatever Rick doesn’t trust him. Carol has a look that clearly says she is knocking this guy out next.

Daryl wants to know how long they have been tailing them. Aaron ignores the question and instead insist he is a good guy and just wants to help. Aaron offers to take them to see for themselves. Rick points out that fifteen people aren’t going to fit in one car. Aaron refers to the Walkers as Roamers. I guess everyone has a different name for them. Aaron then states if he wanted to harm them he could have easily set the barn on fire while they were asleep. What a Governor thing to say.

Michonne, Maggie, Glenn, Rosita and Abraham decide they will check it out. Michonne wants to find a safe place for Judith and this could be the place. Rick gives Glenn Aaron’s gun. Rick tells them of they aren’t back in sixty they will come and get them. Everyone else has a spot outside the barn looking for anything that moves. Rick opted to stay inside the barn with Aaron. Aaron is still trying the I’m a good guy routine on Rick who tells him point blank if his people aren’t back in a hour safe and sound he will have no problem putting a knife through his head.

It’s a Glenntatorship while out hunting for the cars. Glenn wants weapons up and eyes open. Michonne wants to know what happens if Aaron is telling the truth. Glenn makes it pretty simple nobody running up to people holding guns just wants to say hello. Someone is hiding behind a tractor watching them.

Judith is crying and Aaron says she can have his applesauce. Rick isn’t biting. Rick thinks it might be poisoned and Aaron has some weird aversion to it something about his mother. Rick lets Aaron know he has forty three minutes and counting.

Michonne and company find a RV and a Cadillac. Abraham and Rosita take a few Walkers. They head into the RV and look around. Abraham ask Rosita if she thought he was going to hurt her. Rosita tells him no.

Everyone gets back to the barn with the food they took. Rick makes it clear the food is theirs. Michonne tells Rick Aaron isn’t lying and that they are going to his place. Michonne gives anyone who doesn’t want to go the chance to say so. Daryl is uncertain but Rick says they are all going. Aaron wants to,drive them but Michonne would prefer directions thank you very much. Aaron obliges but only by giving them half the directions. Rick says they will go at night so they can make a get away if they have to.

Rick wants everyone to eat and rest before it gets dark. Rick tells Michonne Aaron goes in the car with them and Glenn. Rick still isn’t sure about Aaron and his community but he is willing to go and check things out.

Night falls and everyone is getting ready to go. Rick finds a grip of license plates and ask Aaron what that’s all about. Aaron tells Rick he wants all fifty states. Michonne ask about his place and he shows her all his pictures. She ask about the people and he says that picture didn’t come out. Michonne then ask Rick if he asked him the three questions. Rick says no. Michonne decodes to ask. First question is how many Walkers has he killed. Aaron tells her a lot. Second question is how many people has he killed. Aaron says two and only because they were going to kill him. Before question three is asked Rick finds a mic and realizes someone has been listening to them the whole time. Before Rick can go all crazy pants they run into a bunch of Walkers. The car is literally painted red with Walker blood. Rick jumps out and looks for the RV but doesn’t see it. Glenn tries to start the car but the engine wont start. There are tons of Walkers coming. Michonne starts pulling guts and body parts out of the engine. Rick sees a flare and demands to know who did it. Aaron offers a it’s over and him hauling ass out of the car as his rebuttal. Rick tells Michonne to let him go. Rick is shooting at the Walkers. Glenn almost bites it but manages to bash the Walkers head in. Glenn then pulls one off of Aaron and unties his hands. Glenn tells him to run if he wants but together they can make it. Rick’s is now taking Walkers out with a flare gun. Aaron and Glenn mow the rest down with the car. Rick ask where the rest of his people are. They head towards the flare.

When they find the others Aaron immediately ask after Eric. Eric is inside the RV with a broken ankle. Eric and Aaron kiss. Aaron tells him the no longer have a car. Eric doesn’t seem to upset and even points out that the RV scares the Roamers away. Aaron goes outside with Rick and thanks them and then tells them the name of the community is Alexandria. Aaron doesn’t want to drive and ask to,wait until the morning. Rick says he needs to sleep away from them. Aaron informs him he will be staying with Eric and short of killing him there is no way Rick will stop him. Glenn convinces Rick to let Aaron stay with them.

Aaron is siting next to a sleeping Eric she Noah brings him some pain medicine. Aaron ask Noah what happened to his leg. Noah tells him about the car accident he and his father had while trying to get away from Rotters in the road. Aaron tells him about a surgeon named Pete who may be able to help him.

Rosita sees Washington on the horizon and tells Abraham to look. Abraham sees the warning light in the RV and ask her how much further. Rosita says they are half way. The RVs battery dies and they have to stop. Glenn says they need another battery. Glenn finds the back up and Abraham ask him how he knew about it. Good old Dale that’s how.

Glenn gets the RV started and it’s happy all around. Rick ask for a minute and he runs behind a house and hides a gun in a old blender. You know just in case. Rick drives up to a large metal fence. Rick stares at it for a moment and his eyes begin to soften when he hears the kids playing. Michonne reaches out and touches his hand and ask if he is ready. Rick nods. Everyone gets out and heads toward the fence. Rick gets out and gets Judith from the backseat. Carol walks up to him and reminds him even when he is wrong he is right. Rick stands there for a minute watching Judith. Rick kisses her on the head and says here we go and heads towards the fence with the others.