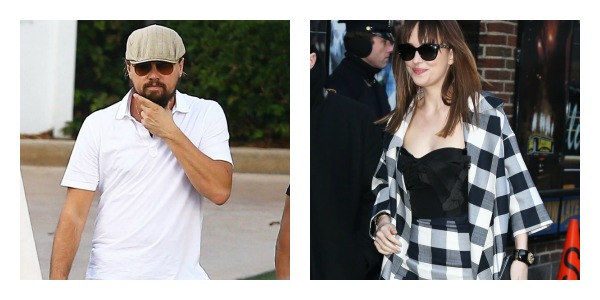 Leonardo DiCaprio is usually very selective about the girls he dates/the girls he hits on, i.e. they are usually tall, blonde, and Victoria’s Secret supermodels. However, a new report from Life & Style Magazine claims that Leo has been spotted flirting with Dakota Johnson, coming off a massive hit with Fifty Shades of Grey.

Apparently, Leo cornered Dakota at the SNL 40 after-party at the Plaza Hotel, and then proceeded to flirt with her for the next few hours. A source tells Life & Style, “Dakota looked like she was trying to play it cool, but you could tell she was thrilled to have his attention. As they walked away, Leo took the lead and guided her through the crowd, and a small smile spread across her face.”

If this actually happened, then I guarantee you a billion other people would have also witnessed it. Leonardo freaking DiCaprio isn’t going to hit on a budding movie star – who just had the number #1 movie in the world, no less – without people noticing.

The SNL afterparty was also packed with gossip spies and gossip mongers, and this story would have appeared on People or Page Six, or at the very least, US Weekly. Life & Style isn’t the most reliable tabloid, but more than that, this is a story that would have spread like wildfire.

Leonardo DiCaprio’s love life is always a hot topic of discussion, and there’s no way the press wouldn’t have sniffed it out and reported it. Plus, Dakota Johnson is on her way to becoming an A-list star in her own regard now, thanks to Fifty Shades of Grey, and her love has become widely discussed as well.

What do you guys think? Did Leonardo DiCaprio deviate from his VS supermodel type and hit on Dakota Johnson? Let us know your thoughts in the comments below.