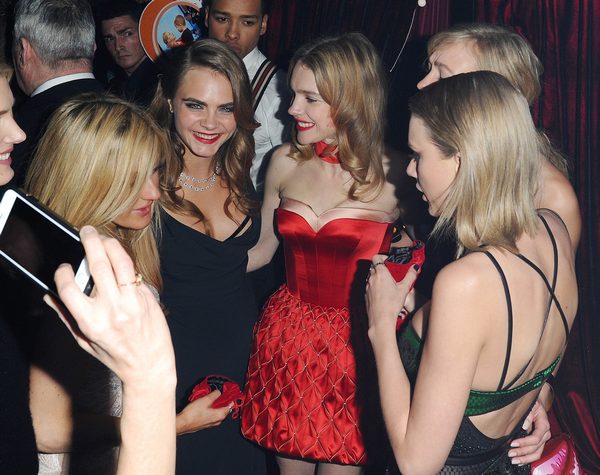 Cara Delevingne and Karlie Kloss are both supermodels, and they’re reportedly fighting over one of their shared BFFs – Taylor Swift.

Hollywood Life’s source also adds, “Cara can be extremely two faced, like whenever she sees Taylor she acts like they’re best friends but then behind her back she makes fun of her. She was all over Taylor at the Brit Awards even though she always says how boring Taylor is, so Karlie called her out for being a fake and Cara went crazy on her, it got really ugly.”

You know, this would be a lot easier to believe if all three girls didn’t pretend to be best friends. Of course, girl drama in Hollywood is almost always undercover, and there’s no guarantee that them pretending to be friends reflects reality in any way. But with all the comments that Taylor has made about supporting other women in the industry – and her now public feud with Katy Perry – I don’t think she would be nice to Cara Delevingne if she got wind that Cara was ‘talking smack’ about her behind her back.

Don’t you guys agree? Would Taylor Swift really stay friends with Cara in this scenario, especially after Karlie and Cara supposedly got into a major fight over it? Again, it’s Hollywood – one can never predict anything, especially when it concerns young models and singers and actresses.