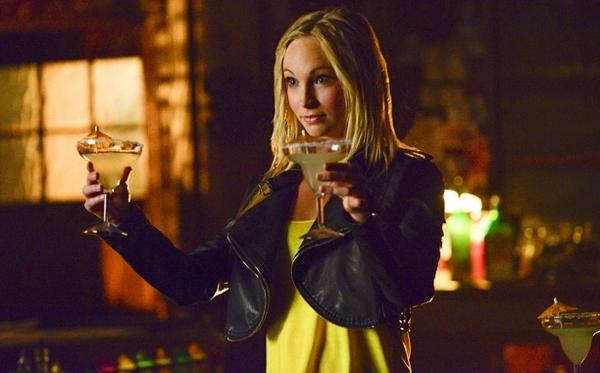 Elena’s is looking everywhere for Caroline but can’t find her. Stefan comes up equally as empty handed when he goes to her house. Stefan and Elena decide to keep looking and check in with each other later. Bonnie pops up and Elena and Bonnie hug.

Damon and Kai are digging up Damon’s moms grave. Kai points out it is unnecessary as well as ewwwww. Damon tells Kai that his mom died in 1858 and therefore couldn’t have been in Bonnie’s time trip in 1903. Kai suggest that Damon’s mother might be just like him. Damon opens the coffin and what do you know it’s empty. Kai tells Damon everything about his mother was a lie.

Sarah thinks she is sneaking pictures of Enzo. Enzo comes up behind her and he tells her to shoot him from his left side cause it’s his best side. Sarah wants to know why his blood is a cure all. Enzo wants to have tea with her.

Bonnie is all about having her own clothes back. Elena pops a bottle to celebrate and the sound makes Bonnie jump. Bonnie ask about Jeremy and art school. Bonnie tells Elena not to tell him that Bonnie is back. Bonnie wants Jeremy to have the chance at a normal life before he finds out she is back. Caroline comes in with a crap load of shopping bags. Caroline fakes being happy to see Bonnie. Caroline tells Elena she ran into her ex at the bar and he was tasty. Bonnie thinks Caroline killed him. Caroline tells them she didn’t because carrying a body though the woods in heels would have just been to much. Caroline says she turned off her humanity not her idiot switch. Caroline tells them as long as they give her a year to do as she pleases she will be a good girl but if anybody tries to stop her she will become Caroline the terrible. Caroline leaves for a latte.

Damon is with Stefan. Stefan has himself convinced Caroline is going to end up killing someone. Damon tries to ease his guilt by telling him none of this is his fault. Kai pops up and mentions that their mother is A still alive and B trapped in a prison of time. Damon tells Kai to send him back into 1903. Kai says he needs a special ascendant. Damon tells him he is the uber witch and therefore should know where it is. Kai tells him he does know where it is. Damon ask what Kai’s price is. Kai wants a one on one with Bonnie.

Sarah is trying to weasel some info out of Enzo to no avail. When Sarah tells him she has pictures Enzo grabs her flash drive. He tells her he is fast as well as strong and snaps it in half. Sarah complains that it cost her 70 dollars. Enzo also brags about being rich and throws some money at her. Sarah ask Enzo what exactly he is. Enzo tells her a vampire. More Anne Rice than Twilight. Caroline comes over and wants to know if this Sarah is Stefan’s Sarah. Enzo realizes what Caroline has done to herself. Caroline invites him to a party and takes off.

Stefan finds Liam and finds out about the party. Stefan calls Elena and ask if she would like to go.

Bonnie and Elena go separate ways once at the party to look for Caroline. Caroline sees Elena watching her and grabs a guy and is about to chow down but then mentally says she was fine which Elena hears. Meanwhile Bonnie is getting hit on and is not happy about it. The guy grabs her and Bonnie uses her magic to make his hands burn. Bonnie walks away.

Stefan and Elena are having a pow wow about Caroline. Elena thinks she will be fine. Stefan doesn’t and is guilty about not telling her how he felt. Elena ask if he has a plan.

Damon calls Bonnie and they flirt a bit. Bonnie ask him what he wants. Damon tells her about Kai. Bonnie says if she never hears his name again it will be too soon. They hang up.

Damon tells Kai Bonnie said it’s a world of no when it comes to seeing him again. Kai tells Damon thats to bad and then tells him about his mother. Apparently she was caught in New York in 1903. Damon wants to know more. Kai fakes with the sick and says maybe Bonnie will change her mind by the time he finds a cough drop.

Stefan tries to get Caroline to come back for him for them. Caroline gets mad and takes off. Caroline finds Liam and ask how he is in surgery. Liam tells Caroline he is terrible. Caroline says perfect and tells Liam to follow her.

Enzo shows up and Caroline ask about Sarah. Enzo says she didn’t come with him. Caroline jokingly tells him him Stefan compelled Sarah to be turned off by vampires. Caroline offers to show him some more of her tricks. Enzo says no since she isn’t herself. Without Enzo knowing Caroline stole his phone and Sarah’s number.

Damon brings Kai to Bonnie at the party. Kai is shy and it’s more clear what other trait he got from Luke. Kai apologizes to,her. Bonnie threatens to hurt him if he ever comes near her again. After Bonnie leaves Kai tells Damon he thought that would go differently.

Caroline calls Stefan and lets him know what she has in store for Sarah. Death pretty much with a pinch of suffering.

Damon tries to make things ok with Bonnie. Bonnie isn’t feeling it but she does feel like making Damon feel what Kai put her through. Bonnie snaps out of it and tells Damon to go. Damon tries to talk to her and she screams for him to get away from her. Damon takes off.

Kai tells Damon that his mother was a ripper. Kai says she killed over three thousand people including a boat full of people that was burned to destroy evidence of her carnage. Damon tells Kai to leave.

Bonnie leaves Jeremy a message saying that when she is ready she will come to him but first she needs to figure out who she is.

Elena calls Stefan and he tells her to bring him back because he is going to flip. Elena screams no but it’s a case of too little too late. Stefan went to the dark side. It has mixed drinks and cookies. Caroline smirks happily.

Elena finds Liam and Sarah. Liam is covered in blood and apologizes to Elena. Elena feeds Sarah her blood. Liam wants to take Sarah’s heart and Elena has to break his hands to prevent him from doing so. Elena calls Stefan back and ask him if he is ok. Stefan says just one sec and takes a sip of his drink. Elena begs him to tell her he didn’t turn his self off. Stefan says he won’t tell her then. Stefan passes the honors and the phone over to Caroline. Who happily tells Elena that he shut it off.