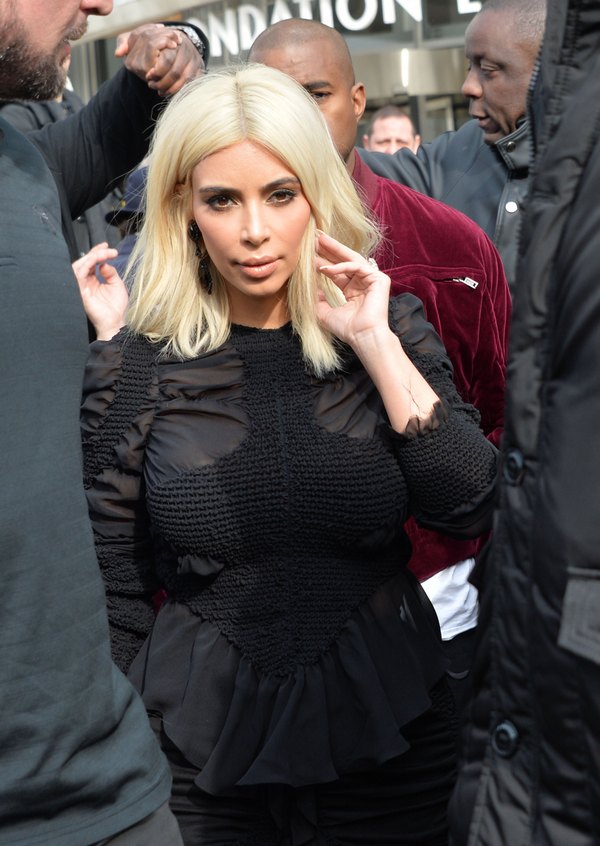 Kim Kardashian has been making waves with her new, platinum blonde hair. However, sources have been telling Radar Online that Kim’s hair isn’t actually fully blonde, but only partially blonde. According to the report, Kim has actually been wearing a partial wig!

Well, duh. Of course Kim Kardashian will go to any lengths to alter her appearance to what she assumes is the most attractive and aesthetically appealing alternative. It’s kind of the principles she was raised on, and it’s how she became famous…

Radar’s source gives a detailed explanation of how Kim is pulling this farce off, stating, “The first top quarter of her hair in the front is bleached, but the rest isn’t. It’s bleached on the top and sides – and the rest is a wig. It’s parted perfectly and at different lengths and you always see the front of her head so it looks like it’s all normal, but it’s trickery…”

The source also adds that Kim will eventually go back to her brown hair within a few weeks, once the backlash becomes too much for her to bear – or if the upkeep becomes too time-consuming.

The problem is – Kim has already convinced most people that she has dyed her hair blonde. If she ends up going back to brown hair within a few days, no problem, then people will obviously question it. At the same time, her blonde hair been met with criticism at almost every corner, so obviously she’s not going to keep it. Whoever helped her make that decision was obviously out of their minds, because platinum blonde hair just makes Kim’s face incredibly harsh and feline – not appealing in any which way.

What do you guys think? Is Kim Kardashian wearing a partial blonde wig? Or is the blonde hair actually au naturel? Let us know your thoughts in the comments below.