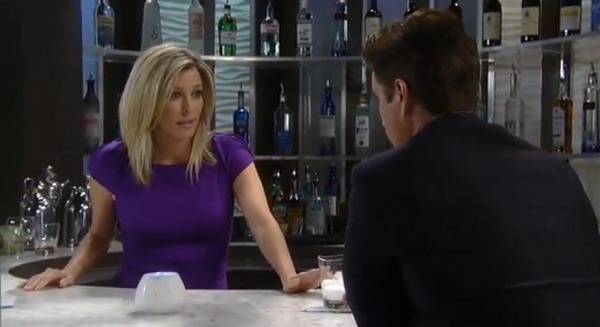 Monday- Spinelli Tracy he may have found Luke’s sister. Spinelli says she has been keeping a low profile but he managed to find a address. Tracy wants to head there. Spinelli thinks that’s a bad idea and suggest they ask the people who love at her precious address of they know anything. Tracy is off and running. Spinelli tells Lulu about kissing Maxie and Tracy suggest he go see her.

Nathan is attempting to break things off with Maxie. Maxie won’t hear of it. She wiggles her way back into his good graces and they kiss. Spinelli opens the door in them and they decide to head to Maxie’s. Spinelli says it isn’t over yet.

Franco Nina and Luke try his escape plan. Of course it goes awry and of course Luke still manages to escape.

Kiki refuses to take off with Avery.

Silas breaks the news to Ava that she is dying from cancer. Silas also tells her no one in her family is a match.

Michael wants Sonny arrested for keeping him from getting Avery. Carly as well because she was in on it. Kiki and Morgan show up with Avery. Michael takes her and promises Kiki that Avery will always know her mother since he is dropping Corinthos from her name. Michael says he is going to call her AJ.

Tuesday- Maxie wants to spend the night with Nathan but he gets a call from Dante saying that Luke escaped and Nina may be a accomplice. Nathan leaves. Spinelli shows up to,get a hard drive. When he sees Nathan isn’t there he tries to,convince Maxie to let him stay. Jaunt as she is about to throw him out Felicia calls to tell her Georgie is sick and at the hospital.

Lulu leaves and a jumpy Tracy almost takes Michael out with a fireplace poker. Tracy and Michael take them a with a fussy AJ. Michael is surprised to see the softer side of Tracy. Later she leaves to see what she can find out about Luke and Michael shows AJ a picture of well AJ.

Olivia is with Rocco when Lulu comes back home. Lulu tells her she needs to find someone else to help with Rocco since Olivia is going to have her own baby soon. Olivia thanks Lulu for her support.

Franco takes the blame for Luke getting away so Nina won’t get in trouble with Nathan. Nathan and Dante leave to look for Luke. Nina thanks Franco.

Brad is Lucas’s surprise patient. They are kissing when he gets called away to help with Georgie. Maxie and Spinelli arrive and he tells them she has the flu and he is keeping her overnight to be on the safe side. Brad catches up to Lucas and they kiss some more.

Nathan shows up to see how Georgie is and he catches her in a close family moment with Spinelli.

Wednesday- Sabrina shows up at Michaels. He tells her that the clinic is on hold. When he has to take a call Sabrina takes AJ. Michael sees how good she is with her and tells her he may have a way to help her with a job.

Sonny gets angry at Carly for wanting to,go,see Jake even though she explains he was there for her and she needs to be there for him. Ric arrives and he tells Sonny Jake is a pain in his relationships ass as well. Ric then tells him he files the appeals. He thinks Michael will,come around and do the right thing.

Patrick tells Jake he is releasing him. Patrick makes it clear how he feels about what he did to him and Sam. Jake tells Patrick Sam isn’t his type. Wow…lol. Curly appears and Patrick and Elizabeth leave.

Carly and Jake discuss how he can get a job with Julian. Carly suggest he talk to Sam.

Sam runs into Spinelli and is excited to see him. They discuss their love lives or lack thereof. Spinelli takes Sam to see Georgie.

Maxie is discussing her Nathan, Spinelli dilemma with Lulu. Lulu ask her if she still has feelings for Spinelli. Before Maxie can answer Sam and Spinelli show up.

Dante and Nathan discuss Spinelli and Maxie. Dante tells him family’s come in all sizes and shapes and not to let Maxie go if he loves her.

Anna and Jordan have a private pow wow.

Julian and Carlos get in a shootout with Duke and Julian. Anna shows up,and tells Carlos and Julian to take off. Anna tells Duke this is his only freebie. Jordan shows up and Shawn wonders how Anna knew where to find them.

Nathan shows up to see Maxie. Sam takes Spinelli with her. Nathan tells Maxie he loves her.

Sam and Spinelli are walking down the hall when he see Jake from behind. Spinelli says Stone Cold. Holy wow he is been back like what a week tops and he figured out what no one else has without ever even having talked to Jake. Only Spinelli.

Thursday- Spinelli runs to Jake and hugs him. He starts blabbering but sees the error when Jake turns around. Jake ask who Spinelli thought he was. Carly says Jason. Sam wants to take Spinelli to jello. Jake ask to talk to her first. Carly walks off with Spinelli.

Jake hits Sam up for a job with her dad.

Spinelli isn’t dropping the Jason train and ask Carly if Jake seems familiar to her. She says yes but that he isn’t Jason. Spinelli doesn’t look convinced.

Sam and Spinelli are off to get jello. Strike that Spinelli is Sam gets side tracked by Patrick.

Elizabeth hears Jake say he is getting a job with Julian and is concerned. Carly says she needs to support Jake.

Shawn and Jordan argue over if she is a cop or not. She says she isn’t. She suggest he go to Sonny and Duke if he can’t trust her. Shawn says she might.

Anna reappears and Jordan tells her she wants out since she thinks she blew her cover. Anna tells her it’s not a option.

Sonny and Duke are talking when Shawn walks in and tells him what he thinks about Jordan. Shawn says he will see what he can find out. Sonny and Duke worry about what Jordan can do to them.

Kiki hears Michael offer Sabrina a job as AJ’s nanny. Kiki becomes enraged and gives Michael and Sabrina a piece of her mind. Kiki leaves. Sabrina says she doesn’t want the job but then Michael convinces her otherwise.

Silas tells Ava that her new little one could be a match but Ava won’t let him test her. Ava wants Silas to,help Kiki get Avery back.

Kiki goes to see Julian and ask for his help with Avery. Julian tells her he will see what he can do. Kiki leaves. Carlos comes out and ask what he wants to do about Duke. Julian says kill him.

Friday- Ric is looking for Elizabeth at the hospital. Ric comes to see Elizabeth. Jake tells him she does like Jake. Ric says she isn’t giving up on her. Elizabeth has given up on him and is done. Ric tells her it’s a mistake.

Sam ask her dad to give Jake a job. The non dangerous sort. Julian agrees and then ask if something is going in between her and Jake.

Duke and Sonny talk about killing Jordan. They decide they need more proof first because of how much it will affect the people around them.

Carly takes Jake to her place and warns him about Josslyn. Carly starts complaining about Elizabeth. Sam calls and tells Jake he has a job with her dad. Carly leaves. Sonny shows up.

Anna breaks into Sloane’s and they bicker while he is in the buff. After Anna leaves Jake calls and tells him he is in.