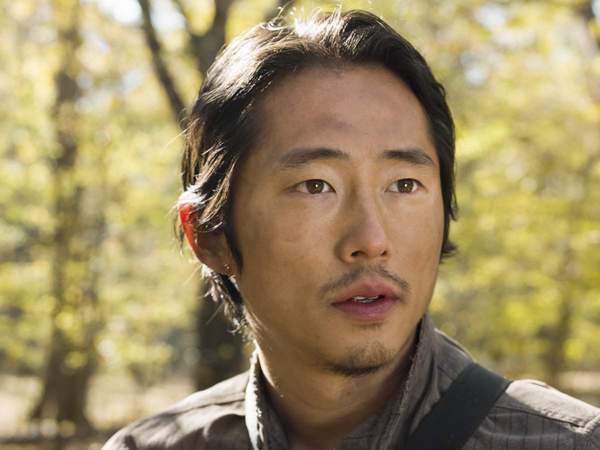 Gabriel who I was beginning to think had fallen into the seventh circle of hell is in a Church/garage. He walks up to the pulpit. Gabriel glances at a Bible. He glances over at some strawberries and takes a note inside of them. “Father, we are so blessed to have you. Please enjoy, Rosemary.” Gabriel walks back up to his Bible and starts ripping the pages out. Even he is going nuts. Gabriel stops and looks up.

Daryl has motorcycle built and is ready to go. The gate opens and he takes off.

Noah goes to see Deanna’s husband Reg. Noah ask of Reg will teach him to make things. Reg is surprised and so Noah if he wants to be a architect. Noah says he just wants to know how to keep the place safe. Reg questions of he is in to for the long haul. Noah tells him he is. I guess no one gave Noah the memo about how the first rule of the walking dead is never looking forward to a future. Reg writes a line or two in a notebook, rips the pages out and then hands it to Noah. Reg tells Noah it’s his turn to write. Reg tells him this is the beginning.

Abraham who is looking like he is about to lose his shit as well cleans up while Rosita is sleeping.

Noah is with Eugene who he offers a gun. Eugene tells him he doesn’t need it because he isn’t going. Eugene goes up to Aiden and shows him what he wants. Eugene starts talking Noah’s ear off. Noah politely listens and then shoves a gun at Eugene which he takes. Tara and Noah mount up to go with Aiden they share a giggle. Glenn is also on board. Turns out Eugene and some guy named Nicholas are also going.

Gabriel comes out of the garage but the second he sees Reg he nods and goes back in.

Rick is walking nonchalantly over to Jessie who is knee deep in cleaning up what’s left of her owl she was making. Rick offers to get to the bottom of it. Jessie says it’s ok and not to worry about it. Rick is insistent and tells her he needs something to do anyway.

Glenn and company are at a building. Aiden and Nicholas are all gung-ho. Glenn on the other hand opts to use his head and find a way out before they go in. Noah puts a Walker down. Aiden concedes that Glenn might be right.

Tara meanwhile is busting Eugene’s balls about being a coward. Eugene has no,problem admitting it.

Noah and Glenn are talking about what a dumb ass Aiden is. To further illustrate the point when they turn the corner they see that had they gone along with Aiden’s brilliant plan they would have all died. Glenn goes up to the door and pounds on it. Glenn is checking for Walkers. Aiden says f that and heads in. Glenn hears what he thinks are walkers. Aiden thinks it’s nonsense until they come to a bunch of them trapped. Aiden freaks out. Tara tells Eugene to find what he is looking for. Eugene does. A lone Walker comes shambling along. It has a helmet on. So what does bird brian Aiden do. He shoots it where the grenade is so the whole freaking place will go boom. Amateurs. Once the smoke clears we find out that Aiden is for sure a goner and that Tara might be pretty damn close. Glenn wants Eugene to take out any approaches Walkers. Stupid idea if I ever heard one. Glenn has to take it out. He ushers everyone into the office while he goes to see about Tara.

Carol is confronted by Sam who wants to make cookies with her. Carol treats him. Is it because she knows kids are a bad omen for her or is she going as crazy as Rick? Carol tells him if he wants cookies he will have to steal the chocolate. Carol also tells him if he gets caught he better keep it zipped.

Aiden actually isn’t dead much to everyone’s surprise. Eugene promises to protect Tara while the other three go and try to help Aiden.

Abraham is loading up some project supplies with some other people. The guy with him days he needs to do number two and tells Abraham to be the lookout. Abraham starts freaking out and is finding it hard to breathe. Great just great Abraham is losing it. Someone screams and it’s ready aim and fire time. A girl falls and Abraham gets her. He sees a zombie and says what only Abraham can say “motherdick.” Abraham hides and starts taking them out.

Meanwhile Rick is dealing with a dick of his own. The one of the porch variety,we will just call him Pete. He offers Rick a beer but Rick would rather not be a drunken idiot like the one standing in front of him. Rick tells Pete he asked around but no one knows what happened to Jessie’s sculpture. Pete ask about Rick’s wife. Awkward much. Pete tells Rick to bring his kids in for a checkup. Yeah that’s just what Rick wants Doctor gets sloppy drunk a lot looking at his kids. Pete suggest they be friends. Rick fakes his way through that suggestion with a smile and a handshake. Rick watches him leave. When Rick shuts the door he gets that crazy look again as he stares at his hand.

Eugene meanwhile is all about keeping Tara safe. I guess it is true what they say about how every time a Tara gets hurt a Eugene gets a pair. Eugene peeks out the office door picks her up and carries her out. Next thing you know Eugene is shooting Walkers. No need to double check you read that sentence correctly.

Aiden is got like a million things sticking in his body. Glenn tells him to shut up. They manage to free Aiden just as Noah runs out of bullets. Nicholas is all about the taking off and leaving Aiden to die deal. Which he does. Aiden tells Glenn it was him that screwed up with the others. Noah grabs Glenn just in time. Aiden becomes a Walker snack.

Abraham meanwhile goes into full G.I Joe mode and tells everyone to get their asses in gear and thats a order.

Nicholas manages to get himself, Noah and Glenn trapped in a revolving door surrounded by Walkers.

Abraham is now going to be the new leader of kicking ass while gathering supplies.

Deanna marvels to Maggie about how it’s her people she is giving all the important jobs to. Maggie tells her if they want a future they need them. Deanna is inclined to agree.

Sam shows up with the chocolate. Sam wants to talk. Carol doesn’t. Sam doesn’t like the silence. Carol tells him cooking was a distraction for her when she was upset. Sam tells her he breaks shit when he is sad. Carol ask of he broke the statue. Sam shakes his head yes. Sam ask her why she took the guns. Carol says for protection. Sam wants one. Carol ask why. Sam tells her it isn’t for him. Carol ask who it is for. Sam takes off without answering.

Over in we are so screwed stuck in this revolving door land Nicholas thinks there must be a way out.

Eugene pulls up in a van playing dub step. Of course that survives the apocalypse. Anyway Nicholas pushes Glenn and Noah towards the Walkers and gets free. Noah unfortunately pays the price and is literally torn apart. It looked like something straight out of Mortal Kombat. All that was missing was hearing the word fatality. If you are even slightly squeamish you really do not want to see that. Glenn understandably cries like a baby.

Nicholas’s worthless scaredy cat ass runs up to the van and informs Eugene they are leaving. Eugene realizes something is wrong takes the keys out and gets out of the van and asks where they are. Nicholas tells him he either gets in the van are dies with his friends those are his choices. Eugene gets upset and goes to pull the gun. Nicholas knocks him down. Nicholas climbs in the van and Glenn comes running up, pulls him out and bears him unconscious. Glenn tells Eugene to help him load Nicholas into the van. Eugene ask where Noah is. Glenn just gives Eugene this heartbroken look.

Carol goes to see Jessie. She has to knock more than once. Pete tells Carol she isn’t available and shuts the door in her face.

Eugene is all about keeping a gun pointed at Nicholas while Glenn drives back. Eugene looks down at the notebook Noah had and sees where he wrote this is the beginning.

Gabriel comes to see Deanna and sells out Rick and company. Which is a bitch move considering how many times they saved his ass. Gabriel tells Deanna that they have all done unspeakable things. Maggie is standing on the stairs listening to everything.

Carol tells Rick all about Pete’s need to use his wife’s face for a punching bag.

Gabriel is still talking to Deanna. He tells her Rick and the others can’t be trusted and that they are dangerous. Gabriel tells her that one day they will put their lives above everyone else’s and destroy what she has built.

Rick ask Carol how she knows about Pete. He wants to know if Sam told her. Carol tells Rick he didn’t. I assume it’s from her own experience.

Deanna thanks Judas I mean Gabriel and tells him she will think about what he said.

Glenn yells for help as soon as they pull up. Deanna hears him.

Carol meanwhile gives Rick the best gift ever by telling him he needs to kill Pete. The half smile on his face is a dead give away.

Looks like Noah was right. This is the beginning. The beginning of everything going straight to hell.