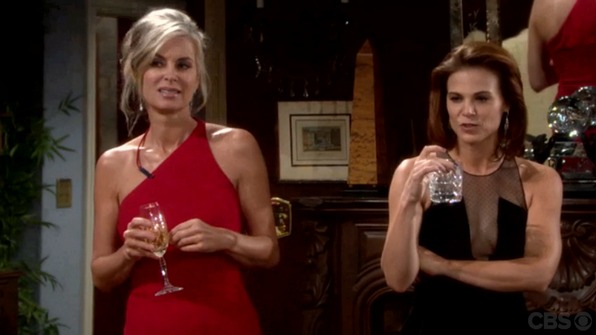 The Young and the Restless Recap and Weekly Review for March 9th, 2015 – March 13th, 2015 is below for your enjoyment! – See more at: Hollywood Hiccups Recaps…

Monday- Ben is distracted and not even listening to Victoria go on and on about emails. Victoria finally tears her eyes away from her phone and notices. Victoria ask him what’s wrong. Ben thinks Billy and Chelsea’s engagement bothers. Victoria deflects and suggest that Ben cozy up to Abby and try to help her to feel better.

Billy and Chelsea are disagreeing about a party. Chelsea brings up food and about. A million other things. Billy wants to elope. Chelsea not so much. Chelsea wants the big wedding with friends and family the ex- husband you don’t know really know is your ex- husband.

Sage tells Adam they are getting a divorce and won’t need any more check ins. Adam tells her nope not gonna happen. The guy appears and they tell him about the building catching fire. When he is gone Sage says she kept it zipped for one reason and one reason only. She wants Adam to not be a dick about her and Nick and keep it together around Chelsea and Billy. Adam tells her she doesn’t tell him what to do. Sage says funny I just did. Adam gets up to leave and tells her it’s been lovely. Sage couldn’t agree more.

Sage runs into Chelsea who assures her this marriage will last. Sage has a knowing smile on her face.

Abby plays pity me with Ashley who falls for it. Then Ashley of all people tries to give her relationship advice. Ashley wants her to make up with Summer. Abby tells her never going to happen. Ashley leaves and Ben walks in. Ben is nice to Abby who is very surprised. Abby thanks him. Ben them tells her Austin was planning in doing a expose on her family. Abby can’t believe it. Ben says he is sorry.

Summer is at the cabin and has a flashback of fighting with Austin. Kyle hears her and grabs her to snap her out of it. Kyle tells her to try to remember more. Summer remembers Abby fighting with Austin and then dropping the bookend instead of hitting him with it. Kyle want to know of Summer remembers who did hit Austin. A by shows up and gets slapped by Summer before she and Kyle take off. Abby cries.

Ashley and Victoria get into it about stealing ideas from one another. The finally decide to get along for the moment.

Billy ask Adam to be his best man. Adam tries to find any and every reason to get out of it. Billy won’t budge so they finally shake on it.

Ben tells Victoria about Austin and his expose. Victoria tells Ben she is over Billy but he will always be a part of her life they have children together.

Tuesday- Victor tells his mystery partner that is going to lose everything.

Dylan and Avery are going to go,bowling but then she gets a call and has to go. When she leaves Joe shows up with a box for Avery. Dylan ask what it is the box and Joe tells him to take a look.

Chris meanwhile is on the war path and has moved up Phyllis’s date with destiny. Paul tries to tell her to take it easy. Chris gets pissed and tells him someone is going to pay and since it won’t be Nikki because he won’t allow it to be Phyllis will have to do. Chris doesn’t want to go hime and see the baby stuff. Paul tells her they can stay at the Club until she can face it.

Jack and Phyllis argue some more over Victor. Avery comes in and tells,her she will,be in court tomorrow. Jack plans on going over Chris. Victor has a mysterious ace-in-the-hole.

Neil wants to come clean and Nikki refuses to let him. Victor comes in and Neil leaves. When Victor suggest Neil is to blame Nikki yells at him. Victor tells her he got rid of all the liquor and them he leaves.

Dylan and Avery get into a fight about her keeping her grandmas wedding dress that Joe brought her. Avery leaves as Joe watches.

Lily tells Devon about the car accident. Devon goes to find Neil who admits the accident was his fault and he is responsible for killing Chris’s baby.

Kelly walks up to Jack and Phyllis and Chris and Paul and says she has something to tell them. Victor is watching it all.

Wednesday- Devon is with Neil at his apartment. Neil want to confess. Hilary hears and wants to know what’s going on. Devon throws her out and hands her a wad of cash. Neil blurts it out and Hilary tells fed on she is sorry. Hilary ask what they are going to do. Devon tells her Neil’s family will stick by him and that doesn’t include Hilary. Hilary storms out purse, suitcase, and money in hand.

Kelly meanwhile says that she lied about everything. Jack suggest Kelly zip it and get a lawyer. Chris is enraged and Paul takes her to the side. Kelly tells Jack she did it all because she loves him. Phyllis tells her she is a crazy bitch and she is going to make her pay. Kelly faints and Jack catches her. Wouldn’t be something if she was pregnant?

Victor tells Chris she can’t make her own rules. Kelly who is awake again wants the charges dropped. Paul takes Kelly in.

Summer is with Kyle. Summer opens her compact and sees a message scrawled on the mirror that reads ” I know what you did.” Summer freaks.

Abby and Mariah get into it at the cabin. Abby ask her what she is doing there. Mariah can to get a scarf. They both get a text then Kevin comes in and says everyone got one to meet Summer there. When Summer arrives she accuses Abby of writing the message. That’s when she finds out there was another message that she never saw. Abby takes off and Kyle goes after her. Noah goes after Kyle and ask some questions about Fen. Summer and Mariah are trying to tear each other apart. Kevin breaks it up. They argue back and forth about going to the police. They hear a noise and panic. Kevin and Noah confirm someone was watching them. Summer decodes to,tell,them she remembers she didn’t kill Austin. She leaves with Noah and Courtney. Mariah and Kevin stay.

Kyle finds Abby and accuses her. Abby gets mad and leaves.

Kelly confesses to doing everything Phyllis is accused of. Paul tells Chris she has to drop the charges. Chris walks off.

Victor promise Kelly she will get everything she wants and even more.

Noah, Summer, and Courtney find Abby unconscious in the park with a bloody head.

Thursday- Nick and Sharon manage to be civil to one another.

Courtney calls for a ambulance for Abby. Summer grabs Abby’s phone. It has a message on it. “Shut up or you’re next.”

Lauren tries to build Michael up to no avail.

Phyllis leaves a message for Avery. She has some news for her.

Dylan wakes up a sleeping Avery who screams I can’t do it. Avery tells Dylan she will get rid of the dress.

Victoria is with Ashley and Ben when Noah calls about Abby.

Michael gets into a fight with Lauren about her looking for his replacement. Lauren calls him a jackass and storms out.

Phyllis tells Avery that Kelly confessed to everything. Avery gives Phyllis the dress and then admits she married Joe in it. Phyllis thinks the dress is a bad omen. They hug. Later Phyllis burns the dress and says to the future.

Dylan appears and ask Nick if he has talked to his mom. Nick says no. Dylan tells him he might want to get on that. Dylan then tells him about Avery. Nick leaves. Sharing reassures Dylan about Avery. Avery comes in and trades barbs with Sharon. Avery goes to Dylan and ask if they are on solid ground. Dylan tells her they are and they hug.

At the hospital the kids are trying to figure out what in the hell is going on. Summer goes to see Abby and tells her about the message on her phone. A cop appears to take her statement.

Ashley comes to see her and Abby claims it was just a mugging. Her mom keeps asking questions and Abby gets upset and says she doesn’t want to talk about it anymore.

Kyle thinks he has it all figured out but is interrupted by Nick who points out they have been spending a lot of time together lately. Nick leaves.

Ashley sends Ben in to check Abby. The meds start kicking in and she slips and says Austin was killed. Ben ask her about it and she tries to say she misspoke. Ben doesn’t buy it.

He goes outside and tells Victoria Abby should stay with them.

Kyle thinks the killer is concerned with Austin’s documentary. Noah thinks it’s a member of his family.

Friday- Kevin, Kyle, and Summer are watching a video of Austin. Austin is ranting about the Abbots and the Newmans. Summer is in tears. Kevin found it in Austin’s laptop and there are more of them. Mariah shows up and starts with Summer. Kyla and Kevin put a stop to it. They try to figure out who would have killed him. Summer and Kyle leave. Kevin keeps going through his laptop.

Abby and Ben are talking. Abby finally tells him what really happened to Austin. Ben suggest she goes to the police. She won’t and makes him promise not to tell anyone. Victoria comes in and Abby tells her she is going to Billy’s engagement party. Victoria offers to take her. Abby declines but lets Ben drive her.

Ben warns Abby to be careful.

Things are crazy over at party central. Billy gives Chelsea the opportunity to call the wedding off but she doesn’t. Ashley and Phyllis’s are fighting. Jack wants Phyllis to marry him in a month. Phyllis puts the ring back on but wants more time.

Adam is telling the contractor to take his sweet ass time fixing the penthouse they are in no hurry. Safe tries the lets get divorced idea again. Adam tells Chelsea he is Billy’s best man. Billy comes over and thanks Adam for making this all possible by saving his life. Adam starts drinking.

At the party Kyle and Abby are talking about her being in danger. Jack makes a toast. Adam decides he wants to make a drunken one of his own. Adam says there is something they need to hear.
Mariah tells Summer she guesses Austin married her to take down her family.

Victoria is looking at a picture of Billy.