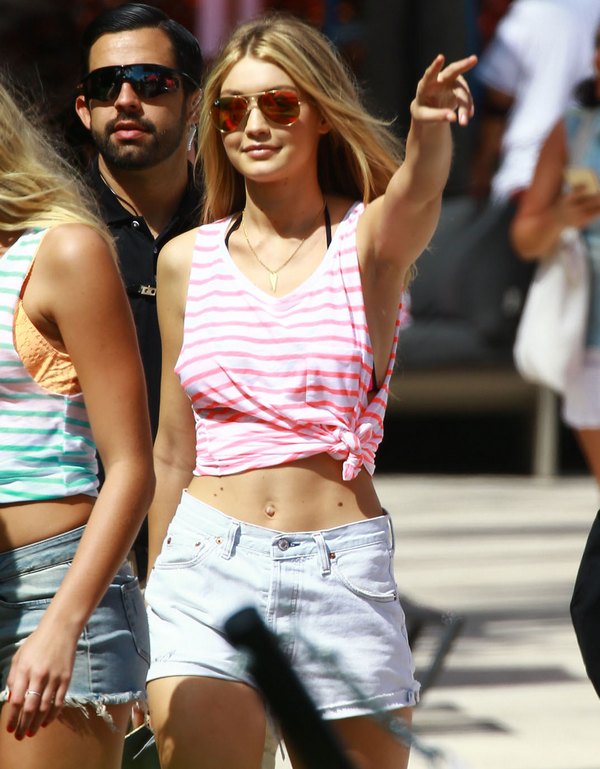 Gigi Hadid is a famous supermodel now, and that means that she should get used to the rumors, the gossip, and increased media scrutiny. For example, Gigi was hosting a Victoria’s Secret Spring Break event in Miami this weekend when a snapchat user attending the event uploaded a video that shows Gigi bending over and snorting what looks suspiciously like cocaine off a table.

However, according to Gigi, SHE WAS NOT DOING DRUGS! That’s pretty much how she conveyed that message on Twitter as well, explaining, “@OCEANUP you are the pits of the world. It’s very sad that you need to go to those lengths for someone to maybe read your s–t blog. If u actually watch the video there is nothing on the counter .5 sec’s before you see that image…It’s not only impossible but insane to me.”

If that wasn’t a strong enough message to OCEANUP [the site that uploaded the video], Gigi also added, “Besides for doing the supposed in general, I’d be an idiot to do that at a WORK EVENT in front of hundreds of people/press. I’m insulted. I take pride in being a good role model. Would never touch that, & will not stand for or put up with a little piece of scum blog like OU.”

Honestly, there’s really no way of proving whether Gigi was actually doing cocaine or not. What we do know is that many, many, many models in the fashion industry do drugs, and some have publicly admitted it. Forget the whole recreational aspect of drugs, there’s also the fact that drugs like cocaine and other uppers help them limit their appetite and also give them a big boost of energy. It explains why they’re able to do things like runway and catwalk when they haven’t eaten any food and have been partying for days [and nights] on end.

What do you guys think? Is Gigi Hadid telling the truth about not doing cocaine at the event? Or is she lying because she knows no one will be able to prove it? Let us know your thoughts in the comments below.