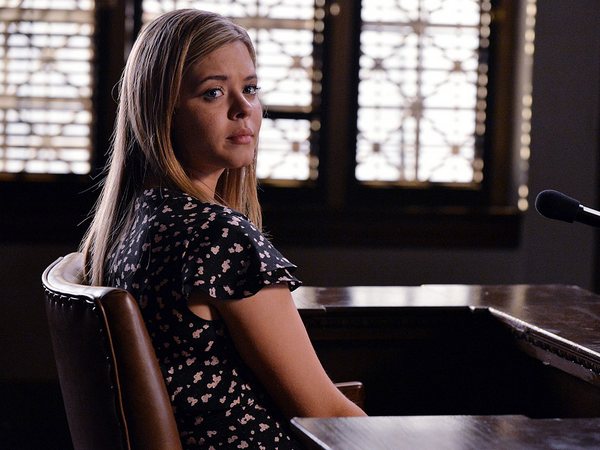 A news broadcast is showing. The reporter lets us know the trial,has been ongoing for two months. Sara Shepard is saying that there is a surprise witness for the prosecution who is taking the stand.

In court the judge ask the prosecution to call their next witness. It’s the red headed Leslie Stone from earlier this season. She gets on the stand and starts telling her son story about how MonA sent her card saying she was scared but she ignored it because you know it was high school. Andrew shows up and takes Aria’s hand. Leslie goes on to say she is sure Alison’s friends were trying to keep her from finding out something and then says Hannah was the biggest offender because she followed her everywhere and refused to let her in MonA’s room by herself. Leslie also throws Mike under the bus.

Spencer who is clearly on the ball as far as snow jobs go rushes out of the courtroom and calls Caleb. Spencer leaves him a message telling him he needs to let Hannah know what is going on and to call her back. Spencer and Toby spot each other at the same time. Toby walks over and they make awkward small talk. Toby ask about her interview at Oxford and she tells him about A ruining for her. Spencer then brings up Melissa’s roommate and tells him he helped her. Emily comes flying down the stairs and makes it clear Spencer needs to get back in there. Spencer takes off to leave Toby looking after her.

Hannah and Alison are talking to the girls by phone. They are all on edge. Alison knows her day is coming. Hannah can’t understand what Leslie’s problem is. Spencer says it might be the fact Hannah followed her to the bathroom. Alison tells them she might have a alibi. Alison tells them while she was freezing her ass off in the cold on a swing waiting for Cyrus to show up on Thanksgiving she heard someone on the playground. Spencer ask is he saw anyone. Alison tells them all she saw was a jacket and she assumed it was A. The girls are now on the hunt for whoever Alison thought she saw and heard.

Aria is at home doing a google search on Leslie Stone. Mike comes upstairs and she grabs him and shoves him in her room and shuts the door. Aria tells him about Leslie testifying and how she brought up Mike and there is a possibility he could be called as a witness. Mike is ok with it he wants to tell the truth about what he knows. Aria tells him that would be a huge mistake. Mike ask if she wants him to lie. Aria says know he just needs to say three things yes, no, and I don’t know. Mike leaves Aria’s room.

Alison is handing out clean jumpers and towels. Hannah walks up and Alison ask her if she has the note. Hannah passes it to her. Alison gives her a note as well that tells her to come back at 8:05 the next night.

Toby goes to see Tanner. She hands him a list of coffee orders. Toby ask her if he is being punished. She claims she just wants coffee. Before Toby can ask anything else she slams the door in his face.

Aria is on the couch working on yearbook stuff because her mom thinks it will help keep her mind off stuff. Mike walks in with a box of stuff she needs. Aria opens it and takes out the papers inside. Mike comments on the funny smell and starts taking stuff out of the box. He gets to a cooler and opens it. Inside is a cows tongue. Mike can’t believe it. He ask Aria who sent it. Aria ask him who he thinks did. Aria tells him this is why he needs to stay quiet or next time it will be his tongue. Ella walks in and Aria and Mike play the situation off.

Aria goes to EzrA and ask him to help her get Mike out of town. At first he hesitant. Aria ask if it’s because they are no longer together. EzrA sucks it up and tells her he will pick Mike up at four. Aria thanks him.

Spencer and Emily are at the park. Emily wants to look around. They go to the pipe where Alison heard the noise coming from and Emily gets in it. A guy who is with his church group cleaning comes out of nowhere and scares them both. Emily ask if he has ever seen anyone there. He tells her no.

While Aria is helping with the yearbook pictures Andrew walks in and pouts about Aria going to EzrA even though she is now seeing him. Aria tries to explain her relationship with EzrA to Andrew and tells him it doesn’t need to worry. Aria gives him a kiss and gets back to yearbook fun.

Caleb goes to see Hannah. Caleb wants Mike to tell what he knows. Hannah is against because Mike is just a kid.

When Emily and Spencer get to school they see a girl with the scarf Alison described. They go up to her and start asking her questions. She refuses and as she is leaving she runs into Ella and tells her that she promised not to say anything and now her daughter and her friends know. She runs past Ella. Spencer and Emily just stand there looking at Ella.

Ella’s comes in to see Aria. Aria tells her she is looking for a quote for the yearbook. Aria brings up her mom keeping that girl from them. Ella tries to explain to Aria why she didn’t say anything. Apparently her name is Kendra and she was high as a kite that day.

Caleb is waiting for EzrA and Mike when they show up at the cabin. Caleb tells Mike he needs to come back and tell,what he knows. Mike agrees. EzrA send a him to the car. Caleb and EzrA start arguing about what Mike should do. Mike takes off in the car and Caleb and EzrA take off after him.

Emily and Spencer are trying to find a way to convince Kendra to come forward. Emily ask about Spencer and Toby. Spencer tells Emily she kissed two other guys. Emily is shocked. Spencer tells her it amounts to it feeling good to be with someone who wanted to be with her. Emily ask of the kisses were open mouth. Before Spencer can get around to answering Kendra knocks on the door and tells them Ms. Montgomery called and told her to come and see them.

Hannah goes back to the laundry room at 8:05. Alison knocks something over to,cause a distraction. They hide next to some dryers. Hannah tells her about Kendra. The guard tells everyone to get back to work. Alison grabs a iron and burns herself. Alison tells Hannah to slam her hand in the dryer. Hannah can’t do it so Alison does it for her.

Rebecca shows up and tells Hannah and Alison off. She lets them know this isn’t high school. She ask for the note and Hannah gives it to her. Rebecca ask her what it is. She then tells them she is headed to her other friends house.

Caleb and EzrA find the car and start looking for Mike. Caleb notices a arrow in the window and calls EzrA over.

Rebecca questions Kendra and then sends her home. Emily and Spencer ask her about having Kendra testify. Rebecca says she is to going to call her because no one believe someone who was high just a few hours earlier. Rebecca tells them she is putting Alison on the stand.

Caleb and EzrA are still looking for Mike. Arrows come flying within inches of them and they hide behind a boat. The arrows keep coming. They start throwing rocks. The arrows stop and they get up to look around and then they take off running in the opposite direction.

Toby comes to see Spencer and they make up. Kisses all around.

Mike is running through the woods when he gets sprayed in the eyes. His vision is really blurry. Mike sees a flash of someone running then gets hit in the back of the head.

Aria is pacing at home freaking out because nobody is answering the phone at the cabin. She calls EzrA gets his voicemail and ask him what is going on. Aria then calls Andrew and also has to leave a message for him. Aria says she is taking him up on his offer of being there for her twenty four seven and wants him to go to the cabin and make sure everything is ok.

EzrA and Caleb find Mike tied to a tree with duct tape on his mouth. Mike looks like hell. EzrA goes to untie him but Caleb wants to take a picture first. Caleb gets it and then they start undoing him.

Back in court Rebecca says there is no way Alison could have thrown MonA around the room because she hurt her elbow when she was three and her arm never fully healed.

EzrA and Caleb have Mike at the police station in Rosewood. Tanner is naturally being snarky and unhelpful. Caleb even shows her the picture and tells her someone is after them and the girls. Tanner doesn’t believe him.

Over on the prosecution side he pulls a archery award out of his ass that was given to Alison. Right when he drops the hammer. Aria, Emily and Spencer get a text “Bullseye Bitches. -A.” You know who else has made skills with a bow and arrow? A. Just saying.

Again Toby goes to see Tanner and again she shuts him down and slams a door in his face and then closes some blinds so he can’t see wear they are doing with the evidence from MonA’s case.

Alison is siting by herself when Rebecca comes over. Alison tells her she didn’t really when the archery thing. Her and a friend rigged it. Alison realizes it wouldn’t matter if she told the truth now.

Aria is sitting on the steps In the courthouse waiting for the verdict. She gets a text from EzrA saying that Mike is at home. Andrew shows up and ask to sit with her. He shows her his yearbook photo page. Aria smiles and says she didn’t know he was a pathfinder. Andrew is apparently the bomb at finding paths. You know who else is good at that gig? A. Just saying.

Hannah is sitting in her cell.

The verdict for Alison is guilty. She cries as do the girls. Aria notices Tanner and the cop who is headed there direction. Aria grabs Spencer to get her attention.

Aria, Emily, and Spencer are arrested, fingerprinted, searched, booked and have their photos taken.

A Tag- A is playing with a bus that has little dolls of the girls in orange jumpsuits in it. She takes one of the dolls out and puts it inside a castle them lifts the gate. Then A picks up a boutonnière and holds it up to a suit. Hmmmmmm…….

Next week we find out who A is.