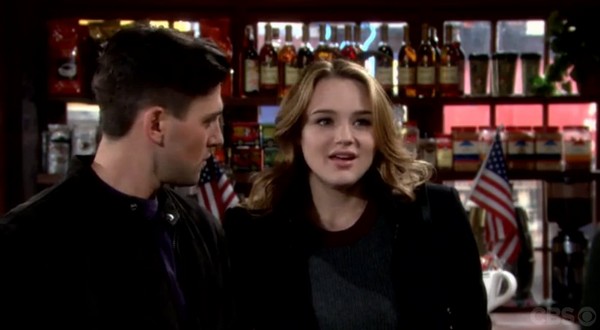 At the party Adam starts a drunk rant. Jack pulls out of the room and tells him not to pull a Victor. Ashley scares a jumpy Abby who decides to leave after Kyle tells her she needs to keep it together. Billy tells Chelsea that Jill and Colin aren’t going to make it. Billy wants to,get married in a month. Chelsea finds out that’s when Phyllis and Jack are getting married. She tells Billy they will have to wait.

Mariah and Summer are going for round ….who the hell knows I lost count. Mariah tells Summer she actually feels for her.

Kevin realizes Stitch knows exactly what happened to Austin thanks to Abby.

Kelly is talking to Victor. Victor wants her to,act hurt and jilted as opposed to confident and strong. Victor tells her to rest up she is going to,need her strength. When stitch arrives Kelly acts angry that he thinks he did it. Kelly tells him she wasn’t herself at the time.

At the party Phyllis gets a call from Avery and takes off. Ashley tells Billy she is ok with him marrying Chelsea. Safe apologizes for Gabriel’s earlier behavior. Kyle is texted by Kevin. Kyle attempts to get ahold of Abby. Jack wonders where in the hell Phyllis is.

Stitch helps Kelly get comfortable at the Club. When he goes she orders a bottle of champagne and looks at her airline ticket. Phyllis arrives and threatens to turn Kelly in. Kelly knocks her out with the champagne bottle.

Stitch comes home to a terrified Abby. Stitch and her go in the basement. When they
come back upstairs they see writing on the mirror. “I’m always watching.”

Kevin and Kyle watch a video that proves Stitch lied about his involvement in Austin’s expose.

Victor is back in the confessional. He tells his co conspirator that she will leave town within twenty four hours. Victor makes it clear they had better be ready.

Tuesday- Jack is looking for Phyllis when Paul shows up and tells him Kelly is out on bail. Jack tells Paul he can’t find Phyllis.

Kelly makes a call and says that there is a problem.

Devon and Hilary bicker some more. As she is leaving Cane stops her and says he knows she still loves Devon.

Kelly leaves to see her “lawyer”.

Phyllis wakes up to a call from Jack. Shades Kelly. When Paul and Jack arrive Phyllis tells Paul about Kelly’s plan to skip town. Paul calls in APB.

Hilary tells a cane she will be leaving soon. She goes to say something about Neil but Lily shows up and chews her out.

Paul ask Lily about Kelly. Lily tells him she left with a suitcase.

Came attempts to set Lily straight about Hilary and what she has been up to.

Nikki is talking to her lawyer and still refuses to tell the truth. Victor suggest she come up with a more believable lie. Kelly shows up and tells him she hit Phyllis. Victor is angry. Victor agrees to help her but warns her there is a price for it. She leaves. Jack and Phyllis show up and accuse him of bailing Kelly out. Victor ask why he would do that. Jack plans to find out out. Kelly calls Jack and says he loves him and hangs up. Jack is concerned Kelly is unstable and might harm herself.

Nikki finds Neil who claims he is just drinking water. Neil tells her he wants to,come clean. He leaves to use the bathroom. Devon comes in and thanks Nikki. A waiter tells them that Neil took off.

Hilary comes in later and says she told the love of her life she didn’t love him hoping to fix everythIng.

Neil goes to the police station and when Paul arrives he confesses to being the one that hit Christine.

Wednesday- Nick is trying to get insurance for the Underground. When Dylan walks in he starts bitching about Sharon being late with Faith. Dylan tells him to chill out. Summer pops in with Kevin and Noah. Nick ask her how she is. Noah brings up the Austin was a jerk trying to make us look bad story. Nick gets upset. Sharon finally shows up with Faith. Faith tells her dad she is having a bad hair day.

The kids are still sure Stitch must know something about Austin’s death.

When Sage comes in Sharon leaves. Faith is anything but nice to Sage.

Meanwhile Sharon listens to the kids talk about Austin’s computer. Noah sees him and when she comes over Summer is hateful as usual. Kevin takes off and leaves the lap top with Noah and Summer because that’s the smartest idea ever. Summer wonders if Sharon could have killed Austin. Noah doesn’t think so. They go in and Sharon looks at the laptop.

Joe wants Avery as his lawyer. He tells her he is trying to help a charity that takes care of abused women and children. Dylan appears and Avery leaves with some paperwork she is doing for Joe. Dylan accuses him of trying to win Avery back. Joe is tired of arguing and leaves. When Avery gets back she and Dylan fight about Joe.

Stitch tells Victoria about so,some watching the house. He tells her he sent Abby to the Club where she will be safer. Right safer where someone will be able to get a copy of the key to her room. Victoria wants Stitch to keep a eye on Abby. Victoria meantime will hire her own security.

Kyle tells Abby everyone thinks Stitch might have killed Austin. Abby thinks he is just trying to help. Kyle leaves and Stitch shows up. He got the room next to hers so he can keep a eye on her for Victoria. Abby acts jumpy and she tells him what Kyle said. Stitch says he is innocent and if anyone has a reason to lie it’s Kyle. Stitch says Victor could have killed Austin.

Nick apologizes to Sage for how Faith acted. They kiss.

Kyle goes to Victorias and finds it funny she was ok with Stitch staying near Abby considering. Kyle then tells her that Stitch is Austin’s video and that he becomes angry with him in it.