The Vampire Diaries Recap: Season 6, Episode 17, ‘A Bird in a Gilded Cage’ 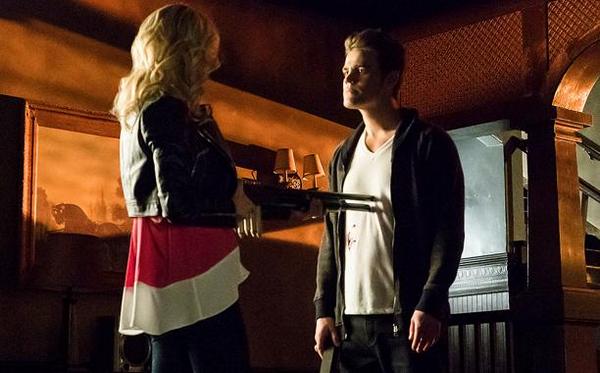 Caroline is busy cleaning up after her switching off my humanity switch party. Enzo comes strolling in and she gets mad that he is getting the floor she mopped dirty again. Enzo mockingly calls her Cinderella and ask her why she cares. Caroline tells him she would like to stay in college thank you very much. Caroline tells him all about her audition the next day. Caroline cuts to the chase and ask Enzo exactly what it is that he wants. Enzo wants his phone. Caroline gleefully tells him about how she called Sarah and threatened to kill her of Stefan didn’t flip his switch. Caroline tells Enzo Sarah could quite possibly have died from infection thanks to Liam’s shotty attempt at surgery. Caroline hands him the mop and heads out to practice for her audition.

Stefan comes in and Damon ask of there is anything he would like to talk about bro to bro. Stefan ask where they keep their weapons. Damon says excuse me. Stefan’s says you know crossbows, grenades, the hunter crap Jeremy was into. Damon tries to stick a needle of night night juice in Stefan’s neck. Stefan is to quick and ends up snapping Damon’s wrist. Stefan then tells Damon to stay out of his way and he zooms off. Damon throws a vase on the floor in anger.

Jo is taking care of Sarah at the hospital. Jo is upset to be doing it under the circumstances she is. Alaric tells her Sarah just needs to stay put until all of Elena’s blood is out of her system. Jo tells Alaric she has been busy pondering baby names. Alaric suggest Junior. Jo suggest he get lost.

Damon is beating up the sofa with a fire poker when Elena comes in. Elena ask what he is doing. Damon tells her looking for a healthy outlet for his rage. Down goes a lamp. Damon tells her he hasn’t found it yet. Damon tells her that Stefan with no humanity is just a artery away from Stefan the Ripper. Elena points out that Stefan was also their only chance to get Caroline back. Damon switches the topic to his mom and the fact that instead of being dad she is in fact a Ripper stuck in 1903. Damon says it all makes sense considering what a mama’s boy Stefan always was. Elena thinks she can fix Stefan. Damon says silly girl you don’t fix one Ripper problem by unleashing another Ripper. Damon thinks he might know a few witches that can help.

Damon lets Bonnie get all her complaints out. Damon apologizes for well being Damon. Damon tells he needs her and Kai to help him get Lilian so she can help flip Stefan back on so that Stefan can turn Caroline on. So it’s pretty much this big turning vampires on deal. Bonnie says he can have her blood. Damon would rather have Bonnie he tells her to stick with him and he might have the answers to all her prayers.

Bonnie is talking to Kai. Kai has the Ascendant for 1903. Kai tells her they don’t need any eclipses to get there. Bonnie ask what the catch is. Kai says he will go if Bonnie goes. Bonnie says she would rather die from cholera than spend anytime with him. Kai tells Caroline is more likely to kill her than some 19th century disease. Bonnie’s got nothing.

Caroline nails the audition. I think I might have seen a little glimpse of old Caroline. Makes no difference though because Stefan shows up and rips the directors head off. Stefan tells Caroline since she ruined his life he is going to ruin hers. Stefan leaves a concerned Caroline behind.

Bonnie cuts her hand open. Kai and Bonnie along with Damon and Elena head back to 1903. Damon says it’s a picture-esque slice of hell. Bonnie decides to go with Kai to find the other Ascendant while Damon and Elena look for his mom. Elena is uncertain about leaving Bonnie with Kai. Bonnie says it’s fine now that he has turned over a new leaf. Once they are gone Kai ask if she believes him. Bonnie tells him hell to the no.

Caroline attempts to put Stefan in his place by destroying his bike. Which stefan finds out as soon as he sits on it. Stefan makes fun of her and points out what a blonde she is for thinking a dismantled bike is equal to a dead director. Caroline punches a hole in the gas tank.

Enzo burst in in Alaric and ask if he has a enough vervain to take down Caroline and Stefan. Alaric says he has some weapons at his apartment.

Elena finds a baby picture and says Damon was cute. Damon tells her that’s Stefan. Haha. Damon says they are there to grab his mom and get back. Then like magic his mom is there. She says Damon. Damon turns around and says hello mother. Mother looks like she has seen a ghost.

Lilian tells her sob story and says she survives on two drops of blood a week. Damon tells her Stefan killed their father. Lilian says she hated him. Damon says not enough to not leave her kids with him.

Caroline and Stefan get into a tussle. He has a stake and is going to stab her with it but she manages to turn the tables and she stabs Stefan.

Kai begs Bonnie to forgive him. Bonnie tells him old Kai is still in him somewhere.

Damon tells Lilian he needs her help with Stefan. Lilian says she will let the others know. Damon says the others!?!?. Lilian takes him to a bunch of vampires that clearly have seen better days.

Alaric and Enzo are on their mission. Alaric ask Enzo what this is all about. Enzo tells him about his revenge plan and how it isn’t going to work if Stefan doesn’t care. Alaric tells Enzo about Sarah almost dying and thinks he needs to reevaluate his choices. Enzo says like his blatant disregard for human life. Alaric thinks Enzo must be very lonely. Enzo says opposed to Alaric’s with a girl, a kid,and then death. Lovely says Enzo.

Caroline is dragging Stefan down a hallway when a girl appears. She ask Caroline what she is doing. Caroline tells her it’s called spring break. The girl ask Caroline if he is ok. Stefan whips the stake into the girls stomach. Caroline calls him a jackass and pulls it out and feeds her some of her blood. Stefan says no saving strangers. Caroline hits him and compels the girl to hide in her room. Stefan and his supersonic hearing pick up some noise. Caroline and Stefan hide. Alaric and Enzo come around the corner following a trail of blood. Alaric sees a bomb drop and alerts Enzo who grabs Alaric and gets out of the way just in time.

Lilian turns on a record and tells Damon the crypt keeper vampires are her friends. While she is gone to get some blood for them Damon tells Elena his mom isn’t just a Ripper she is a insane Ripper. Elena says maybe she feels responsible for them. Damon says it’s a vampire dollhouse. Elena finds the Ascendant. She ask Damon why Bonnie isn’t there. Damon tells her it’s because Bonnie isn’t looking for the Ascendant.

Bonnie tricks Kai. She stabs him over and over and tells him she is going to leave him there. Kai tell her he has changed. Bonnie says so have I. Bonnie goes to stab him again but he makes himself disappear with magic. Bonnie looks around for him.

Caroline makes sure Alaric and Enzo are still alive and well. Stefan wants to kill them but Caroline won’t let him. Stefan wanders into a dorm room and starts drinking blood from a girl. Caroline tries to fight it but eventually she gives in. Caroline stops and grabs Stefan and kisses him. Stefan kisses her right back.

Damon is trying to explain to his mom she can’t take her ummmm…. friends with her. Bonnie pops up and says lets go. Lilian calls the other vampires family and Damon becomes enraged. Bonnie starts the spell and Damon and his mom show up as Bonnie chants. Kai comes towards Bonnie and says her name. Bonnie gives a little smile of satisfaction and then they all disappear. Kai is stuck in 1903 all alone with a bunch of very hungry vampires. He sinks down next to a tree and looks broken.

Enzo goes to see Sarah and tells her she was a pawn in a game he no longer cares to play he tells her she is no ordinary girl and calls her Sarah Salvatore. Enzo tells her she deserves better. Sarah ask Enzo why he would call her that.

Jo hits Alaric and tells him she kind of needs him around for the next eighteen years then he can go and get himself killed.

Lilian tries to explain to Damon why she left. It was for their safety. Damon tells her to get some rest. She wants to go back and get her friends. No good will come of that.

Kai accidentally stumbles into the hornets nest. One of the vampires reaches out and grabs him.

Elena is looking at Damon’s baby picture. Elena tells Damon she is glad they have forever and she kisses him.

Stefan and Caroline lay in bed together in front of a fireplace. Caroline tells him how much fun this is and she starts kissing him.

Damon is about to,get down with Elena when he spies Bonnie out of his little eye. Elena leaves to check on Alaric. Damon says it better be good. Bonnie thanks him for helping her. Damon and Bonnie agree no going back to 1903. Bonnie gives Damon the vampire cure he wanted for Elena. Bonnie leaves. Damon stands lost in thought.