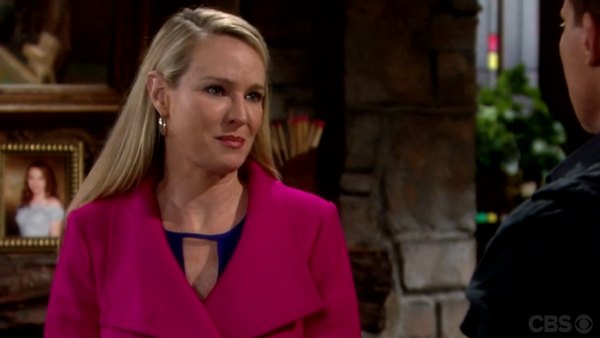 Monday- Victor and his confessional buddy are having another meeting. Victor tells them he hopes they are ready to proceed. Kelly did her and now it’s your turn. Victor says Jack’s life will never be the same.

Jack gets a call while talking with Ashley. Jack ask the person if they are sure.

The teen mystery crackers demand to know why Sharon has Austin’s laptop. Sharon claims she thought it was Noah’s. They don’t believe her. Sharon comes clean and says she told Austin things about Nick she shouldn’t have. Sharon wants Summer to delete the footage. Noah tells her they will. Summer thinks that there is more to it than Sharon let on. Kyle wants to decode the interviews.

Victoria interrupts Stitch and Abby’s hug. Abby says she was just scared. Victoria says she will hire security for Abby. Stitch and Abby both shoot that idea down. Abby gets a call and her and Stitch have to leave for work. Stitch kisses Victoria on the way out.

At work Abby is afraid Stitch might slip and tell her mother. Abby apologizes for dragging him into her mess. Ashley walks in and Abby leaves. Ashley ask Stitch if he is sleeping with Abby. Stitch is shocked and tells her no. Stitch explains he is keeping a eye on Abby for Victoria.

Victoria tells Victor she hopes his vendetta against Jack doesn’t ruin the family.

Kevin finds out about Sharon and Austin. Summer wonders if Sharon saw Austin on Valentines Day. Noah reminds her she was with Faith and crashed her car. Summer thinks she could have been on the way back from the cabin.

Jack is with Phyllis when he gets a call that Kelly got away from the police in Abu-Dhabi. Victor comes in and tells Phyllis she looks damn good. When he is gone Phyllis comment son him strange it was. Jack says Victor is see time him up and he wonders for what.

Tuesday- Neil declines the help of Victor’s lawyer. Victor tells Neil to let him know if he changes his mind. Christine is still determined to make Nikki pay one way or another. The ADA assures Christine he will nail Neil’s ass to the wall.

Hilary eavesdrop on a conversation between Lily and Devon about Neil.

Lauren wants why time with Michael but ends up having to leave so he can talk with Cane. Cane wants out of his contract at Chancellor. Michael gets upset when he finds out that Cane knows he has cancer. Cane leaves. Lauren comes back and wants to have some fun. Michael yells for her to stop and tells her can’t pretend anymore. Michael takes off.

Phyllis is freaking out about Victor and Kelly. Jack calms her down. Phyllis says that
they are both after something. John pops up and Jack admits he screwed up. John tells him he is still a good man. Jack is afraid if Kelly winds up dead he will get the blame.

Phyllis goes to see Victor who tells her Kelly is dead from a apparent suicide. Phyllis wants proof.

Hilary tries to help Neil. He thinks she is just worried about the money.

Christine tells Paul she will never be able to carry another baby. Paul breaks down.

Cane wants to move back into his room with Lily. Lily tells him he can.

Hilary offers to buy the ADA a cup of coffee.

Wednesday- Jack tells Stitch about Kelly’s apparent suicide. Stitch wants proof. Jack shows him the picture. Stitch gets upset and blames it all on Jack. Jack tries to defend himself. Stitch has had enough.

Adam and Chelsea are going on a little road trip together. Sage starts a fight when Chelsea leaves the room. Sage slaps Adam.

Billy is telling Ashley about looking at a sight for the wedding with Chelsea. Chelsea pops in and says she is going out of town with Gabriel. When Chelsea leaves Ashley points out that she and Ben are not on the same page.

Victoria tells Nick that their dad is up to something. She gets a call about Stitch and leaves. Sage shows up and her and Nick end up drinking, dancing, and kissing.

Victoria tries her best to help Stitch it doesn’t work. Victoria leaves. Stitch ends up leaving with Abby instead.

Adam gets Chelsea to talk about Adam. Chelsea tells him she sometimes feels like she is cheating on Adam with Billy because she feels that Adam is still there. Adam says he is still there.
Billy and Victoria end up together. Victoria tells him she doesn’t mesh with Stitch the way she did who him. Billy says that’s the same problem he has with Chelsea.

Thursday- Victoria and Billy discuss them not being together and who they are with. They hug before he leaves.

Adam kind of scares Chelsea. Before she can take off the guy arrives with gas for the car.

Kevin gets Sharon’s interview with Austin open. He says he hit pay dirt with Sharon. The boys leave and Mariah and Summer talk. Summer remembers Austin asking her if Nick ever used the Newman name to get out of trouble. Mariah say maybe he did.

Sharon tells Dylan about her saying some inappropriate things to Austin about Nick. Dylan suggest Sharon tell Nick before he finds out from somebody else. Sharon leaves to find Nick.

Nick and Sage have sex. Sharon walks in and can’t believe it. Sage takes off. Nick ask what Sharon did. She gets mad and leaves.

Kevin says that while they were all knocked out at the cabin not only was Austin murdered but that the files were also deleted.

Chelsea and Billy decide instead of talking to other people that from now on they will confide in each other.

Sage tells Adam she had sex with Nick. Sage tells him he needs to tell Chelsea the truth.

Dylan goes to check on Sharon who is spiraling over Nick and Sage. She has writing on her mirror. “I know the truth and so do you.” Sharon ask Dylan if she thinks she wrote it.

Friday- Stitch slips to Abby that he cheated on Victoria. Abby wants to know who the Ho is. Stitch tells her it was her mother. Stitch tells Abby not to tell Victoria.

Sage and Chelsea talk about love. Sage tells her about her love that does. Chelsea says she understands and tells Sage she can’t completely commit to Billy and thinks getting married might be a mistake.

Adam tells Nick he can sleep with adage just not to let everyone know about it. He wants his money. Avery shows up and brings up the charity. Adam tells her he will make a donation Avery tells him it’s his grandmothers charity the Bingham charity. Adam makes a excuse and signs some papers. Nick and Avery are both confused as to why Gabriel trusted her when they have never met.

Dylan calms Sharon down. When he leaves he sends Noah a text saying they need to meet.

The kids finally get the Sharon interview decrypted and they find out all about Nick. Noah leaves to meet Dylan. Mariah thinks that Victor and Nick now have motive to have killed Austin. Summer points out they were trapped at the Underground. Mariah says they could have payed someone to do it.

Dylan tells Noah about Sharon’s message. Noah tells him Abby has gotten some as well.

Safe lets Adam know Chelsea is question her marriage to Billy. Sage is tired of lying. Adam ask her to do it for his sake.

Dylan goes to see Stitch. Dylan tells him Sharon got a message just like Abby’s. Abby comes out from hiding and tells Dylan is she goes to the police she will end up dead.

Nick and Sharon get in a fight and he tells her she shouldn’t be near Faith. Sharon tells him if he tries to keep her from her daughter she will tell everyone he broke a girls neck.

Noah finds out Kyle wrote the message on Sharon’s mirror. Noah punches him. Summer says it could have been Sharon. Mariah says or Victor or Nick.

Avery realizes the signatures for Gabriel are different.