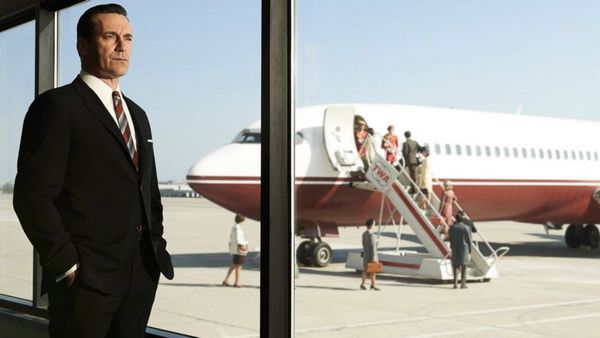 Did you miss the most recent episode of MAD MEN season 7, “Severance”? If so, don’t worry! We have a great review for you here. Here’s what happened during last night’s episode:

Don is chatting up a model. She is in chinchilla. Fat Joe would be so proud. Don wants her to show him how the coat feels. Don wants her to look like she is just in the fur. Don tells her to close her eyes take a deep breath and put her leg on the chair and let the coat slide down so that he can see her skin. She does as she is asked and Don likes what he sees. The next model comes in.

Don is now with three of the models telling them stories. Sterling is also there and sits down between two of the girls. Sterling tells them Don loves to talk about his hard knock life even though he is rich now. Sterling is rude to a waitress and Don gets on to him for it. Sterling leaves a hundred dollar tip as a apology. Don looks back at the waitress as he leaves. The waitress completely ignores him. Don surely will go back at some point his ego can’t take a brush off like that.

Don heads home and listens to his messages. He invites the stewardess over who pours wine in his carpet. He grabs her and a blanket and they hit the floor.

Peggy and Joan show their product to a competitor. The competitor thinks they should go,a,different way and listen him. Peggy isn’t sure and Joan tells him she spoke of their product ideas awhile back.

Ken shows up and takes Art and Marvin to lunch.

Harry wants Joan and Peggy to keep their client.

Don heads to his office to sleep since he was preoccupied all night. ( hint hint wink wink.)

Mathis wants Peggy to go on a blind date with his brother in law.

Don is at it with the models again. Joan is there and he ask if she is interested in the job. Joan tells him about their client and his idea for the product. She doesn’t know what to do. Don tells her to tell time client to change his business name to Macy’s.

Ken give his father in law some new golf clubs.

Don dreams about Rachel or is it Tara from SOA? Don is disappointed when he wakes up and finds the stewardess in his bed instead of Rachel.

Ken and his wife argue over him writing a book and her father. They wake the baby up.

Don gets into work late and his secretary isn’t very happy. Don tells her to set up a meeting with Rachel.

Joan and Peggy meet with a bunch of jerks who talk of nothing but sex. When the girls don’t give in to their nonsense they decide to read the papers they brought with them.

Ken gets fired but is told he can have severance and a reference.

Joan and Peggy get in a fight. Peggy disses the way Joan dresses. Joan calls Peggy ugly. Peggy points out Joan is rich and doesn’t need her job.

Don goes to find the waitress. She tells Don she doesn’t want a line. She heads out to smoke and Don goes with her. She grabs him and kisses and they end up having sex in the alley. Once back inside don wants to know when she gets off work. She tells him he got is hundred dollars worth and can take off.

Ken tells Don he was fired. Ken says he was thinking about quitting to write his book anyway. Ken tells him his accounts are going to Pete. Ken says it’s a sign and all that’s left is for him to drag himself out the office doors.

Dennis calls for Joan and she has her secretary lie and tell him she is in a meeting.

Ken and Pete meet about the hand over of the accounts. Pete suggest that Ken write a adventure book. Pete tells Ken to use him as a reference.

Joan is shopping and a clerk offers her a employee discount assuming she worked there at one time. Joan tells her she never worked there.

Ted tells Don the models have been narrowed to three. Vogue is having a party and he invites Don to go with him.

Peggy goes on her date with a very nervous Stevie. The waitress brings him the wrong order and Peggy ask,him why he didn’t have her give him the right one. Stevie tells her it’s because Mathis told him Peggy isn’t one to put up with nonsense. Peggy exchanges dinners with him. She apparently loves veal. Gross.

Don goes to Rachel’s funeral. Her sister tells him Rachel lived they way she wanted and Rachel had what she wanted. Don looks perplexed. Who can blame him all he knows is liquor and women.

Peggy suggest she and Stevie go to Paris. They end up kissing. Peggy tells him she doesn’t want to sleep with him on the first date. Stevie says he will call her when he gets back from D.C. Peggy smiles at him as he leaves.

Don is listening to Nixon give a speech about the Vietnam War.

Ken shows up when Sterling and Pete are having a meeting. Ken tells them he is now their client.

Mathis shows up to see Peggy. Peggy tells him she had to much too drink on her date and kicks him out.

Don tells his secretary he is heading out. Don goes to the diner and sees the waitress. He tells her about Rachel. She tells him people die all the time and he shouldn’t come back there unless he has a date. Don tells her he is just going to sit there.