Game of Thrones Season 5, Episode 1 Review ‘The Wars to Come’ 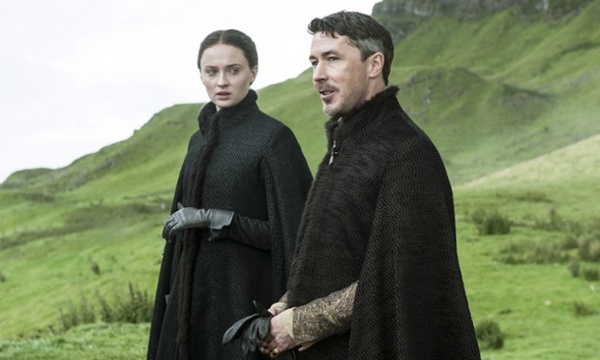 Did you miss Game of Thrones Season 5, Episode 1 ‘The Wars to Come’? If so, don’t worry! We have a great review for you right here. You can catch up on past seasons of HBO’s drama by clicking here for recaps, reviews and spoilers…

Two young girls are in the woods. One is visibly concerned about what the others father will do if he finds out what they are doing. The other girl informs the other one that she can zip it and lock it because her father won’t do anything to them. They see a smoke coming from a chimney and daddy’s girl decides they should go and investigate. There is a woman inside. Daddy’s girl wants the woman to tell her the future and since this is her and her fathers land the woman had better do it. The woman agrees to it and says she will need some of her blood. The girl cuts her finger and the woman sucks on it.

Turns out the little girl was Cersei. She gets out of the coach she is in and goes to see Tywin’s body. Cersei goes in the church and doesn’t hesitate to let Jaime know how angry she is that he let Tyrion free so that he could kill her father.

Meanwhile Tyrion has been brought by Varys to one of his friends homes. Varys informs Tyrion that they need to keep the promise of a future to their country. Tyrion thinks is a lost cause.

One of Dany’s many men heads into a brothel. The girl ask of he wants the usual. Indeed he does. She lays down with him and sings him to sleep. Another man wearing a gold mask creeps in and cuts his throat.

Soon enough Dany is looking at one of the gold mask. Dany ponders why the Sons of the Harpy have chosen to attack now. It proves to be a irrelevant question when she tells her men to go d them and bring them to her. Dany plans on putting a end to them.

Jon Snow is busy training with a young boy when Melisandre informs him the King would like to speak to him. She ask Jon of he is a virgin. Jon tells her no. Melisandre says good and gets a smug smile on her face.

Stannis informs Jon that he wants to take back the North and he wants Jon Snow and company to help him. He tells Jon he will grant them all pardons and they have until midnight to make their decision.

Sansa is being taken far far away by Petyr. He tells Sansa that Cersi Lannister will never be able to find her.

Cersei is at a celebration in honor of her father. Margery and Tommen catch her eye.

Margery strides in and finds her brother entertaining himself with a blonde named Olivar. Apparently Margery’s very boyfriendly brother is going to marry Cersei. Margery however has something entirely different in mind but is keeping it to herself for the time being.

Tyrion meanwhile is drinking his pain and guilt and misery and whatever else he may feel into oblivion. Tyrion demands to know why Vary’s helped him. Vary’s tells him he didn’t do it for him but for their land. Varys says he finds it useful to save people who have certain talents. Tyrion ask him what it is he wants. Varys says they need a leader who can both be lovers and respected. Tyrion says good luck to finding him. Varys says who said it was a him. Turns out Vary’s wants Tyrion to come with him to find Dany.

Dany is getting cozy with Daario. Daario thinks it might be in her best interest to allow the fighting since the people want her to. He tells her to always stay strong because the minute she becomes weak she will be take n advantage of.

Dany heads off to see her dragons who she now has chained and locked up in cages. They are not happy and have no problem making sure Dany knows it.

Jon tries to get Mance to agree to Stannis’s terms and conditions. Mance refuses. Jon tells him it is a huge mistake. Mance tells him all he ever wanted was the freedom to make his own mistakes. He couldn’t have picked a less unfortunate time to make one.

Mance is then led out of his cell and greeted by Stannis who tells him if he kneels before him he will be granted mercy. Mance instead tells Stannis he wishes him good fortune in the wars to come.

He is led out and put on a pyre. Melisandre who is enjoying it just a little too much lights a fire and then tells everyone that this is what happens to those who don’t fall in line with Stannis.

Mance is struggling to breathe. Jon takes off. Soon a arrow flies into Mance’s chest. It was fired by Jon Snow and Stannis knows it.