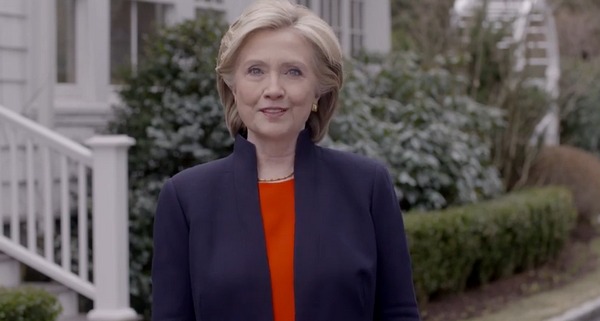 Hillary Clinton is officially running for President! She announced her 2016 presidential bid early this week, ending several months’ worth of speculation and hear-say around the subject.

I mean, let’s be real – there was no WAY that Hillary Clinton wasn’t going to run for President, especially with the amount of popular support she had even BEFORE she announced her bid. She’s also 99% guaranteed as the democratic nominee for 2016, and really, probably the winner of the 2016 presidential race. Of course, it will also come down to who the Republican nominee is, and how solid they are in winning the hearts and minds of the American people. But really, this country has been ready for a female president for a long, long time, and it’s about time it happens.

We have had our first African-American president, and the sheer size of the push behind Hillary Clinton guarantees that she will be the popular favorite to win the election in 2016.

A two-minute campaign video accompanied her announcement on Monday, and at the end of the video, Hillary stated, “I’m running for president. Everyday Americans need a champion. And I want to be that champion. So I’m hitting the road to earn your vote — because it’s your time. And I hope you’ll join me on this journey.”

Hillary will reportedly host a formal kick-off next month, and she’ll probably start her campaign around the same time. And right now, the Democratic Party is going to throw their full support behind Hillary, knowing that their only shot at keeping the White House – especially when the Republicans control the House and the Senate – is with her.

What do you guys think about Hillary Clinton running for President? Let us know your thoughts on her candidacy and her campaign in the comments below, and let us know if you’re planning to vote for her…