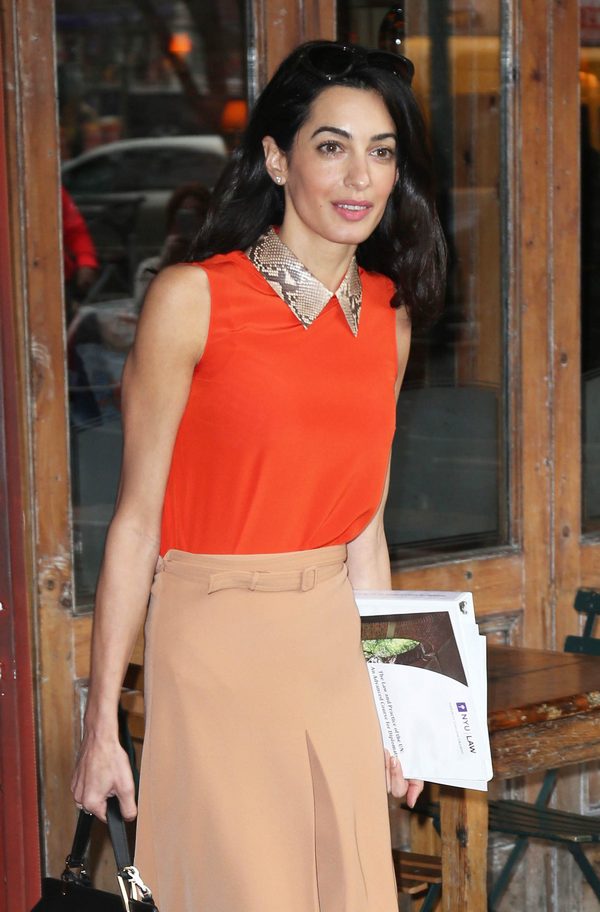 Even though Amal Alamuddin and George Clooney were only married a few months ago, the rumor mill has already been churning out stories about Amal’s supposedly fast-approaching first pregnancy. There are all sorts of versions of the same story out there, but the most common ones are that Amal and George can’t wait to have children OR that George is pressuring Amal for one right now.

However, a new report from People Magazine [i.e., George’s or Amal’s publicist] claims that Amal Alamuddin is much too busy to be thinking about children right now. In fact, People’s source explains, “Amal and George look happy and in love. They’re spending time with other couples and friends who are bright and driven and interested in improving the world. Amal’s very much in love and extremely busy, and [she’s] not thinking about babies [right now].”

I like that the source had to reiterate ‘in love’ twice, just in case we didn’t get it. Amal Alamuddin and George Clooney are very much IN LOVE, you guys. Don’t forget, they’re IN LOVE. Except no, they don’t want to have babies right now, but that doesn’t mean that they’re not IN LOVE.

We’ll have to wait and see whether Amal and George stay as publicly loved up as they’ve been recently, but I don’t think that they’ll refuse to have children forever. Amal is as busy, if not busier, than George right now – and understandably, neither of them want to bring a child into their busy, busy lives. But a few years down the line, when Amal’s career has slowed down and George is nearing retirement? I’m sure they’ll think of adopting, even if natural conception becomes too late for them.

What do you guys think? Will George Clooney and Amal Alamuddin attempt to have a baby soon, i.e. will Amal get pregnant soon? Or is getting pregnant off the table for the next few years, at least? Let us know your thoughts in the comments below.