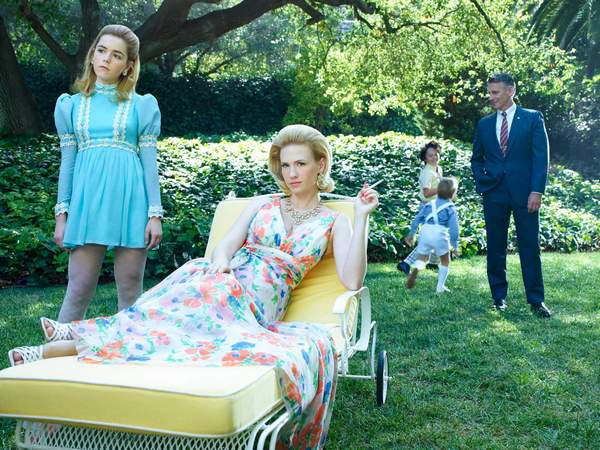 Did you miss the most recent episode of MAD MEN season 7, “The Forecast”? If so, don’t worry! We have a great review for you here. Here’s what happened during last night’s episode:

Mad Men starts with Don being woken up by Melanie she tells him he doesn’t have time for a shower she has someone coming to see his penthouse. Melanie wants him to get some furniture so the place will look nicer and sell. She wants him gone before the potential buyers get there so he takes off.

Joan is awakened by her mother so that she can speak to her son. Joan snaps at her mother and tells her there is a three hour time difference and it’s simple subtraction. She gets cut off and doesn’t even bother to call back.

Don is talking to Sterling who tells him McCann wants a few of them to go to the Bahamas. Sterling tells Don he wants him to write the speech that is to be given. Don isn’t thrilled. Sterling hands him the info he needs and sends him on his merry way.

Joan meets Dee and Lou tells her he will be back after lunch.

Don is shaving while his secretary tries to help him with his speech. Peggy comes in and wants help with the cookie account. Don goes in and has a tag line that is something like, “One Tink and your Hooked,” since they are made with Peter Pan peanut butter. Don leaves and Peggy makes a funny face.

Joan wonders where Lou is. Turns out he is working on his comic a little too much. A Jim McCloud shows up and Joan assumes he is the client she is meeting with. Lou comes in and blows the guys lie. He tells Joan he just lied to meet her. He say his name is Richard and he ask her out to dinner. He offers his card. Joan goes into her meeting and he leaves for his eye appointment.

Betty warns Sally to say away from guys on her trip. Sally tells her mother the talk is a little late and so is she. Betty tells her she isn’t funny.

Melanie lets Don know his sad miserable life is making it hard for her to sell.

Joan and Richard end up in bed together. When talk of kids comes up Richard makes it clear her raised his and is done. Joan changes the subject by hopping on top of him for a little more hanky panky.

Don finds out from his secretary that Sterling wants the speech. He goes to see Ted who isn’t any help.

Joan gets a call at work from Richard and they set up a dinner date.

The cookie account has some problems. The clients are none to happy with the layout and Mathis and Ed got into which resulted in Mathis saying the F word. Don suggest Mathis try and joke about it.

Glen ask Sally to go to Playland with him and she is all for it but then Betty manages to screw it all up by just looking at him. Sally talks about her teen tour and ask her mom about here and ask of there were still colonies back then. When she finds out he is heading to Vietnam she gets upset and reminds him he was against war and decides not to go with him after all.

Mathis ask Don to go with him to the meeting and Don says no. But he does offer him some advice. Mathis heads out.

Richard and Joan end up in his hotel room. Joan calls home to check on her son. She tells Richard she had no intention of spending the night to begin with. Again he brings up not wanting to be involved with kids. He tells Joan she won’t be able to travel with him. Joan agrees and gets up and leaves. Richard looks hurt.

Sally tries to get ahold of Glen to say goodbye but he isn’t home. Both her and his mother cry.

Peggy comes in to get her performance review. Don ask her what she wants to do. Peggy tells him she wants to make something of herself and then create something that last. Don laughs and says in advertising. Peggy gets upset and tells him to write his dreams down so she can shit all over them and then she walks out.

Joan’s babysitter is late. Kevin tells Joan he loves her and Joan tells him she loves him.

Mathis screws up at the meeting and gets kicked off the account. Mathis goes back to Don and pretty much lets him have it insinuating Don gets away with shit because he is so attractive. Don fires his ass.

Richard comes to see Joan and apologizes. Joan tells him he wanted her to choose between him and her son so she is going to choose him. Richard tells her he wants to be part of both of their lives. Joan says she has been divorced twice and now lives with her mother. Richard says he will get a house close by and they can visit. Joan says she will see. Richard ask if he can call her sometime and Joan says he can.

Glen shows up to see Betty. He makes a move on her and she stops him and reminds him that she is married. Glen tells mere he joined up because he flunked out and his step dad would have kicked him out. Betty tells him he will get to come back home. After he leaves Betty becomes upset.

Don is with Sally and her friends having a nice dinner before they leave for their little tour. One of Sally’s friends flirts with him and calls him by his name which only serves to infuriate his daughter. Sally tells her father that he and her mother can’t control themselves especially when they get attention. Don simply tells her he was trying not to embarrass her friend. Don holds Sally’s arm and tells her that she is a beautiful girl and it is up to her if she wants to be more than that.

Gene and Bobby are running through the house with play guns. Betty takes them away and throws them in the trash.

Don comes back to his penthouse and sees that Melanie has already sold it. Melanie says they have to find a new place for him now. Melanie closes the door leaving him in the hall. Don just looks around.