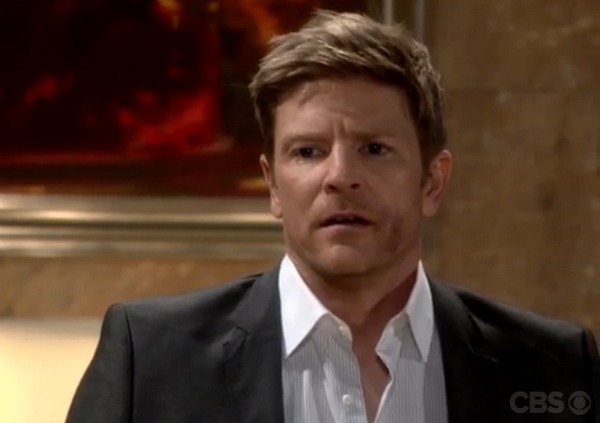 Monday- Cane is with Lauren at the hospital. Michael is pissed that Lauren is there. Lauren can’t understand why he didn’t tell her anything. Michael tells her he was feeling irritated. When Lauren questions where Michael snaps where do you think. Lauren leaves to look for the doctor.

Avery screams and Lily hears her. Lily is told by Avery to call for the ambulance. Avery tells Joe how sorry she is. Paul ask her what happened. She tells him that Joe kissed her and her surprise she pushed him. Paul questions whether it really was a surprise.

Summer is snuggled up with Kyle. Kyle tells her he is glad they are now able to be together. Noah shows up and isn’t to happy about finding Kyle in his undies with Summer. Noah yells at them and leaves. Later when Kyle is on his way out he notices a picture of Summer with Austin.

Avery learns for the doctor that Joe has to have surgery and even though he may never walk again the bigger concern is keeping him alive.

After Michael is released from the hospital they bump into Avery. Avery tells them all about Joe. When she is alone with Michael she admits she pushed him. Michael is upset that she told Paul. Michael ask her what she was doing with Joe in his suite.

Dylan is with Sharon and they are talking about the results of the lab test. Sharon ask if he thinks she killed Austin. Sharon tells Dylan if he doesn’t trust her to call the police. Dylan tells her he believes her. Avery calls and tells Dylan what happened. Dylan gets off the phone and puts the lab results in a safe and tells Sharon to go home and wait. Sharon does leave but comes back later to try and get the results out of the safe.

Dylan finds out about Joe kissing Avery and unwisely calls him names. Avery tells Dylan that she needs Joe to be ok. The doctor comes over and Avery ask about Joe. When very is with Joe in his room she promises to make it up to him. Dylan hears it.

Noah sees Sharon sleeping on a sofa at the house. Noah ask if he can stay there. Sharon is very confused and ask how she got home when she was downtown. Sharon remembers something and says no. Noah notices the tire iron on the table. Sharon tells him all about what happened to her the night Austin was murdered. Summer burst in yelling that it was Sharon. Sharon tells her to call Dylan. Summer wants to call the police and Noah stops her. Sharon leaves.

Cane tells Lily he is going to work at Fenmore’s. Lily thinks it’s a great idea.

Sharon calls Dylan from her car and tells him goodbye.

Tuesday- Dylan is leaving Sharon a message when Paul shows up. Paul ask him about Sharon.

Avery is talking to Joe when his heart stops. The doctor rushes in and orders Avery to leave.

Sharon’s car won’t start so she gets out to get someone to stop. It’s Kyle who ask her where she is going.

Noah and Summer argue over Sharon. Summer thinks now that they have the tire iron they should call the police.

Jack and Phyllis get married in a hotel suite because it’s raining. They make love and drink champagne and Phyllis thinks all is right with the world. Man is she gonna be pissed when she finds out.

Victoria tells Victor that Jack is the one who hacked their computers. Victor thinks Billy got the password from Victoria’s phone.

Avery is allowed back in to see Joe. When she says his name he touches her and opens his eyes. Joe promises Avery he won’t let her get in trouble for this. The doctor comes in and tells him about the swelling. Joe tells Avery he can’t feel his legs. Joe tells her he is going to fight this.

Kyle returns Sharon to her house. Paul shows up as does Dylan. Paul says she is a flight risk. Sharon tells Paul when she woke up the tire iron was on the table. Paul wants to know what’s up with the tire iron. Paul Fonda out that it has Austen’s blood on it along with Sharon’s fingerprints. Kyle demands to know what will be done about it. Paul snaps at Kyle to shut up and then says he would love to haul all their asses in. Sharon is the only one he takes however.

Billy tells Ashley about Jack hacking the computers. Ashley is sure he is mistaken. They try to reach Jack. Ashley says they need to keep this between them. Victor shows up with Victoria and tells then Jack disappears when he is about to get in trouble. All hell breaks loose. Ashley shows Victor out while Victoria accuses Billy of being a liar and stealing the password from her. Ashley knows Jabot is in trouble once the news breaks. Ashley wonders how Jack managed to get the password.

Victoria thinks there is more to it.

Kelly opens a door and tells a tied up Jack hello.

Wednesday- Poser Jack is still pulling one over on Phyllis.

Real Jack is freaking out and ask Kelly what she wants. Kelly says she wants him. Jack soon realizes this is all Victor’s doing. Kelly drugs Jack. Kelly ask Jack if he loves her. Jack says she loves Phyllis. Kelly promptly slaps him across the face and tells him to never say that name again.

Victor harasses Nick about Sharon. Nick tells his dad to zip it and lock it. Victor suggest he quit pretending to be a Ostrich and take his head out of the sand.

Billy tells Ashley he is disappointed Victoria believes the worst when it comes to him. Victoria shows up.

Ashley and Adam leave to see if they can convince Victor not to press charges against Jack.

Billy tells Victoria he knows Jack is guilty. He ask her if they can try and figure this out together.

Sage tells Nick she gave Gabriel divorce papers. Nick is debating how to,remind people of the Underground. Sage says to set up a booth a the street fair. Nick wants to put her in charge of the club. Sage is concerned about mixing business with pleasure. Nick isn’t and they fall back on the sofa.

Adam and Billy get into a fight over Chelsea at the club.

Thursday- Stitch tries to break up Billy and Adam while Victoria and Abby scream in the background. “Kelly’s” ashes accidentally get kicked over and Stitch becomes enraged. Victoria comes to Billy’s defense. Adam calls Billy on his bs and always being around Victoria. Abby grabs Adam and tries to strike up a deal with him. Adam thinks it’s because she is hot for Stitch. Abby claims that isn’t it.

Stitch leaves with Abby to go to Sharon’s hearing. Billy comes to sit next to Victoria and admits she is the one that looks like she got punched. Victoria starts babbling about about how sweet Billy is.

Michael pushed Lauren off on Cane so he can go see what’s happening with Sharon. Lauren tells Cane that Michael is checking out on her. Cane tries to reassure her.

Avery is sharing a close moment with Joe when Dylan comes in and ask her to be Sharon’s attorney. Avery tells him she can’t. Dylan ask if it has anything to do with Joe. Beeping comes from Joe’s room and finds him on the floor. Avery tells Joe she doesn’t think Sharon is innocent.

Dylan ask Michael if he will represent Sharon.

Adam manages to get on Chelsea’s nerves and she leaves.

Michael convince the judge to let Sharon out on bail. Michael says he will live with her and be her guardian. Michael calls Lauren to let her know.

Abby bitches to Stitch about Sharon being released. Stitch tells her he thinks the killer is still out there. Stitch wants to continue staying at the club with her.

Adam is looking at the divorce papers when Chelsea rushes in and demands that he kisses her. He kisses her again and pretty soon they are naked having sex.

Friday- Billy is looking for Chelsea who is across the hall putting her clothes back on and saying she can’t believe what happened. Adam can and its all because of their connection. Chelsea tells him she is going to tell Billy what happened. When she gets home before she can say a word Billy confesses to kissing Victoria. Chelsea lets it slide and neglects to tell him she just banged Gabriel.

Noah and Nick get into it about Sharon being allowed to see Faith. Nick tells Noah he is just protecting her.

Summer, Kyle, Dylan, Abby , and stitch are talking about Paul’s press conference about Sharon. Dylan is convinced she is being frame. Stitch says that means killer is a step ahead of them. Dylan says they need to be a step ahead of the killer.

Abby tells Summer and Kyle Stitch doesn’t think Sharon did it. Stitch wants them to keep their wits about them.

Noah comes in and ask about a necklace of Courtney’s that is missing. Summer tells him she had it on when she last saw her. Noah takes off. Stitch thinks the killer kept it.

Stitch thinks Victoria thinks he is making up excuses to stay with Abby. Abby thinks that silly. Stitch isn’t so sure.

Kyle offers to take Summer back home. Summer is glad he is in her life but thinks they are moving a little too fast.

Sharon and Michael are going over her situation. Sharon goes to make tea and Dylan shows up. Dylan says they have to find the real killer. Kevin calls and says they have a warrant to search her house. Dylan and Sharon start looks around and find a necklace in her car. Noah appears and says its Courtney’s. Noah says Sharon looks guilty. The cops arrive and Sharon begs Noah to keep quiet.

Sage goes to get her stuff. Adam gloats about having sex with Chelsea. He hands her the divorce papers. Adam tells her to get all her stuff. Sage bumps into Chelsea in the hallway and warns her about Gabriel. Chelsea goes in and tells Adam she is still going to marry Billy. Chelsea leaves. Adam is pissed.

Sage has a problem with her credit card so Nick uses his. They flirt and kiss.