The Originals Season 2 Episode 18 Review: ‘When the Levee Breaks’ 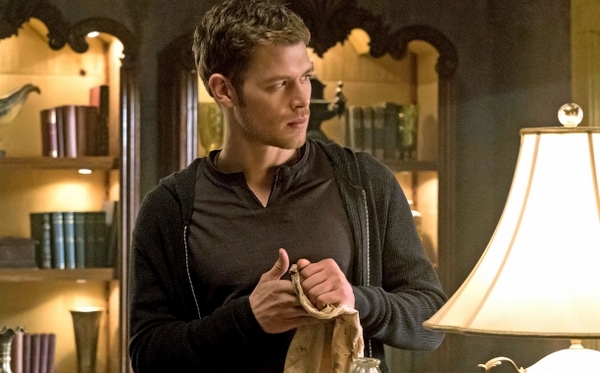 Here is The Originals Season 2 Episode 18 Review: ‘When the Levee Breaks’ review. Click HERE for more recaps of The Originals…

Klaus is acting nonchalant and has the balls to go as far as to ask Elijah what’s wrong. Elijah looks incredulous and ask about Mikael’s ashes. Klaus tells him to mind his own business. Rebekah comes stumbling in and tells them both to shut it. She has quite the hang over after her drinking spree the previous night. Rebekah brings up the fact Klaus killed their father. Klaus thinks they should be more joyous. Elijah points out that Dahlia is still around and by killing their father he ruined their relationship with Freya.

Klaus acts high and mighty as usual and informs them they need not worry he has a plan of his own. So now would be the perfect time to worry. They hear someone walking and they all three head out to see who it is. They find Josephine. A scarf is covering her recent run in with Dahlia. Josephine tells them she has a message for them from Dahlia. Josephine tells them that Hope is the debt they must pay and Esther is the one to blame.

Josephine tells them they exist because of that bargain. Elijah realizes that it’s Dahlia they are talking with. Dahlia says it’s time for her to take the child’s magic. Dahlia knows they have her cloaked with a spell. Dahlia warns them they have until nightfall the next day. Blood begins rushing out from underneath the scarf. Dahlia tells him to tell the child’s mother. Klaus drop kicks Josephine’s head. Klaus has his usual smug smile on his face.

Hayley brings Jackson up to speed on their little Dahlia problem. Haley lets Jackson know that Dahlia can tap into Hope’s magic and a cloaking spell is the only thing standing between them and her. Hayley ponders if there is a way to stop Hope’s magic. All of a sudden Hayley gets a idea. Aiden wants to help since he was such a horrible failure the last time they needed his help.

Rebekah finds Freya in the cemetery. Rebekah tries her best to talk things over and explain Klaus’s point of view. Freya isn’t interested in Klaus or his view. Freya warns Rebekah she shouldn’t trust Klaus and that its time for her and Elijah to pick a side.

Elijah finds Klaus painting. Elijah tells him they haven’t got time. Elijah ask about the ashes again. Klaus refuses to tell Elijah be issue he thinks he will pass go and run straight to Freya. Klaus tells Elijah that Hayley, Jackson, and Freya are not to be trusted. Elijah assures Klaus he can trust him. Klaus thinks not now that Esther has been inside of his head. Elijah reminds him Freya wants Dahlia gone as well. Klaus tells him that Freya may have been the one to wake up Dahlia.

Aiden gets the magic handcuffs from the house. Klaus catches him and tells him he needs to get back to the club and do his bidding. Aiden lies and tells Klaus he came to get a stuffed animal for Hope. Klaus tells him he ever finds out he is lying to him he will kill him.

Aiden takes the handcuffs to Davina so that she can attempt to transfer their magic to another object. Josh is concerned that Klaus is on to Aiden. Davina agrees to help. Davila warns Aiden if Klaus finds out there will be consequences. Aiden tells her that’s his problem.

Haley is with Hope. All of a sudden Haley notice’s Dahlia’s growing on the walls. Haley knows Dahlia has formed them.

Dahlia is outside the club picking off the guards left and right.

Elijah makes a sweet gesture to Freya and returns Mikael’s knife to her. Elijah tells her they need her help to defeat Dahlia. Freya tells him she doesn’t think she can do it. Elijah reminds her if she leaves she will be all alone.

Cami comes to see Klaus. Klaus thinks Elijah sent her. Cami ask Klaus to please tells her what is going on.

Dahlia flings open the doors and looks at Hope. Dahlia tells Haley she just wanted to see her. Haley tells Dahlia she doesn’t have to do this. Dahlia tells her she will die if she doesn’t. Dahlia suggest Haley not waste her last hours with her daughter and tells her goodbye and leaves.

Cami is trying to get through to Klaus. Klaus tells her that he killed Mikael. Cami ask if it’s because he told Freya he loved her. Klaus says he did it because he is a terrible person.

Aiden is with Josh. Aiden says he loves Josh. Aiden lets him know he is going to see Jackson and tell him the truth. Josh would rather they run away together. Aiden says he will meet back up with Josh in a few hours and then they will leave together. Josh is ecstatic and Aiden is about to cry. How I wish I believed they were going to get their happy ending.

Marcel startles Davina who snaps at him and tells him not to sneak up on her. Marcel says he just wanted to see how she was doing. Marcel then does the stupid ass thing and tells her he wasn’t fond of Kol or her relationship with him. Davian tells him he wasn’t there for her when she needed him. Marcel apologizes. Marcel tells her Klaus is going rogue and he and he needs the weapon her and Kol made. Davina informs Marcel that she will decide if and when it gets used on Klaus. Davina tells Marcel to go.

Meanwhile while Klaus is giving Elijah a choice. He must choose between Klaus and Freya.

Aiden gifts Jackson with a bracelet to put on Hope. It should lessen her magic. Aiden tells Jackson he has been working for Klaus. Jackson forgives him. Dahlia is watching.

Elijah and Klaus go to see Haley who tells them she is heading to the Bayou to hide with Hope. Klaus begs to differ.

Aiden gets some flowers for Josh which die the instant he touches them. Dahlia comes out of nowhere and tells him it’s time they start. She tells him it will wane over quickly. She calls Aiden the tipping point. Dahlia attacks him and Aiden ask her why. Dahlia says it has to look convincing. Dahlia then rips his heart and his happy ending with Josh out of his chest. Dahlia holds it for a minute and then puts it down by his dead body.

Davina is walking with Josh when they spot Aiden laying dead in the alley. Josh is beside himself as he tries to wake Aiden up. Finally he breaks down. Davina looks around.

Jackson comes in yelling Klaus’s name while holding Aiden’s dead body. Jackson tells everyone about Klaus and his threat to kill Aiden. They all look at Klaus in shock. Klaus actually says yeah he did do it and to take note because this is what happens to those who betray him. Jackson comes at Klaus and he easily squashes Jackson like a bug. Haley comes at him next and Klaus smacks her to the floor. Elijah comes to Klaus’s rescue. Elijah tells Klaus to go and he does.

Jackson is busy putting the bracelet around Hope’s wrist. Haley chews Elijah’s ass for coming to Klaus’s defense. She tells Elijah there is no way she can run from both Klaus and Dahlia. Haley ask for some time. Which you know she will get because Elijah is still in love with her.

Klaus finally tells Elijah where the ashes are….in his paint. Klaus wants to know why Elijah isn’t watching over Hope, Haley, and Jackson. Elijah tells him that they left. Klaus becomes enraged and grabs Elijah. Klaus tells him he can’t win. Elijah takes the dagger and jams it deep into Klaus’s heart. Rebekah appears and sees Klaus fall. Freya comes in and they all watch as Klaus seems to turn grey and die. Looks like Elijah made his choice. Elijah is beyond upset and unnerved at what he has just done.

Church bells ring in the distance.

The Originals REVIEW: Season 2 Episode 20 “City Beneath the Sea”

The Originals Season 2 Episode 16 Review: ‘Save My Soul’