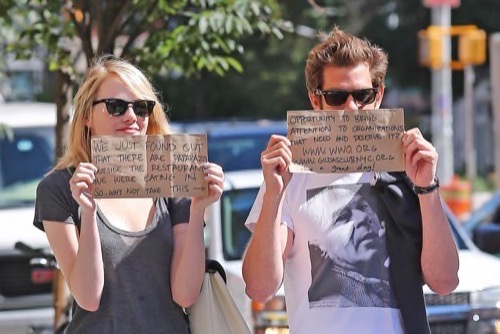 Emma Stone and Andrew Garfield always seemed like one of those Hollywood couples that would stick with each other through thick and thin, even though we really should know better when it comes to Hollywood celebrities. But alas, Emma and Andrew couldn’t last past their Amazing Spider-Man shoots together.

It was rumored a few weeks ago that Emma and Andrew were on a ‘break’ from each other, especially after Andrew was conspicuously absent from all of Emma’s awards season appearances and Emma never visited Andrew while he was filming Martin Scorsese’s ‘Silence’ in Asia.

And now, a new report from US Weekly confirms that it’s NOT a break, but rather, a breakup. The report confirms that Emma Stone and Andrew Garfield did break up, but it was Emma who initiated it and it was Emma who technically dumped Andrew. Apparently, Andrew was in an incredibly dark place while he was getting ready for his role in Silence, and the method acting [so to speak] took a toll on their relationship. In addition to losing forty pounds for the role, Andrew reportedly went dark and stopped being himself, which obviously affected his relationship with Emma. And since he stopped being a good boyfriend, Emma dumped him.

Now, there’s a solid chance that the two will reunite after Andrew finishes filming Silence, especially if Emma hasn’t found a rebound boyfriend by then. However, they no longer have any Amazing Spider-Man movies to reunite on, so there’s no guarantee that they will reunite at all – even if both of them get back in touch with each other.

What do you guys think about Emma Stone and Andrew Garfield, one of Young Hollywood’s most enduring and endearing couples, breaking up? Let us know your thoughts in the comments below.