‘General Hospital’ Rumors: GH Winners Not Allowed By ABC To Appear on ‘The Talk’ for Post Daytime Emmy After-Party 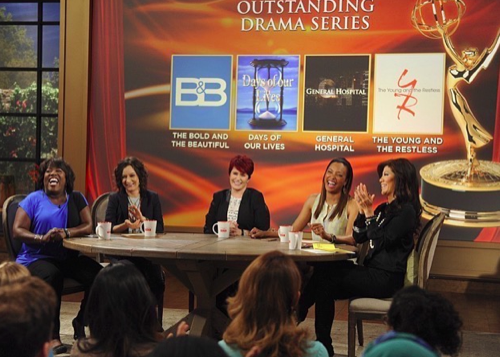 “The latest “General Hospital” news reveals that GH fans could be a bit disappointed if they tune in for “The Talk’s” Daytime Emmy after-party. Michael Logan, a TV Guide reporter, recently tweeted “Seriously ABC? #GH is not allowing its @DaytimeEmmys acting winners (should there be any) to go on The Talk’s post-Emmy special on Monday!” Many viewers have complained that their favorite GH actors and actresses won’t get a chance to take part in the celebration. However, it’s worth noting that “General Hospital” goes up against “The Talk” in many markets. It seems they decided they’d rather anger some fans than risk losing in the ratings. In the end, it’s just one of those lose-lose situations for ABC. 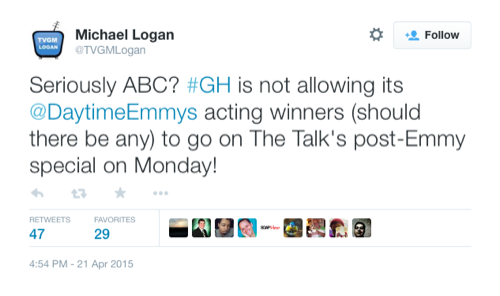 “General Hospital” leads the pack in Daytime Emmy nominations this year with a grand total of 28. Things could get awkward on “The Talk” if GH really cleans up. The rumors say several “General Hospital” actors and actress are favored to win. Nevertheless, the show must go on. While you won’t be able to see any GH winners participating, there’ll be plenty of other soap stars joining the after-party. This marks the fourth time “The Talk” has highlighted the winners of the Daytime Emmy Awards. They’ll get some of the first interviews with the actors and actresses that take home statuettes. The show will also feature a wrap up of all the style and swag from the ceremony. You can check out “The Talk’s” annual Daytime Emmy after-party on Monday, April 27. Stick with Soap Opera Spy for updates on this year’s big winners.

So GH fans, are you bummed about the news that “General Hospital” acting nominees won’t be allowed to appear on the “The Talk’s” post-Emmy show? Will you still watch to see who won all the categories? Who are you rooting for to win at the 42nd Annual Daytime Emmy Awards? Let us know what you think in the comments below and don’t forget to check Soap Opera Spy tomorrow for the latest “General Hospital” news, spoilers, updates and rumors.