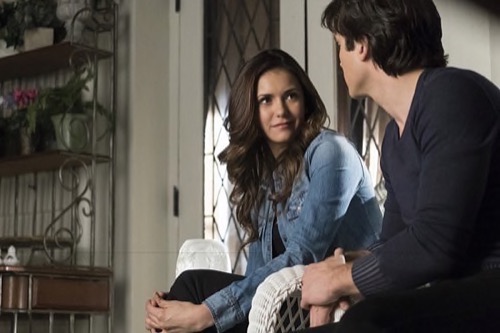 Stefan is determined to return Caroline back to her old self. He is pretending that he still has his humanity off and has tricked her into going to a bed and breakfast with him. Caroline is down for a snack but wonders why he brought her there. We cut back to Stefan explaining his over the top plan to Damon and Elena and how he plans to torture until she snaps. Elena warns him if Caroline figures it out there will be bloody hell to pay for it. Back at the bed and breakfast Stefan fakes calling for towels. Caroline hears the knock and opens the door to Damon who promptly shoots her. Damon ask Stefan if he is sure he wants to go through with this. Stefan tells him he is and Damon shoots him. Three days pass and Caroline wakes up. She ask Stefan what happened. Stefan tells her they got caught. Both of them are tied up.

Elena catches Jo and Alaric playing kiss face when she comes to take over outside the bed and breakfast. Jo leaves to go to the honeymoon suite (hint hint wink wink.) Elena tells him how happy she is that he is happy.

Caroline is banging away to no avail. Caroline can’t believe the bed and breakfast has been vampire proofed. Stefan tells Caroline to quit wasting energy. Caroline grabs a bottle of vodka and downs it. Elena comes to the bars and shows Caroline a letter that came from her mother while she has been ummmmmm away. Caroline doesn’t want to read it but Stefan does. Caroline lights a match. Stefan puts the letter to the match and it burns. Stefan looks at Elena and says if she wants them back she will have to try harder than that. You can see the guilt in Stefan’s eyes as he watches the letter burn.

Matt gets a call from Bonnie. She wants him to keep Lily busy. Turns out Matt won’t be needed because Enzo shows up and Lily remembers him. Matt is surprised and ask of they into each other. Lily says the phrase it’s a small world comes to mind. Enzo says so does epic understatement. Lily wants him to join her and keep her company. Enzo would be happy to.

Elena is telling Damon all about Caroline burning her moms letter. Damon tells her how terrible she is at torture. Thankfully Damon doesn’t. Elena tells Damon that Jo is going to have a baby. Damon ask her if she was human where she would want to be in five hears. Elena tells him in Tribeca. She would be a surgical residency program and they would love above the bar that Damon would own. Elena tells him they would be the parents of two kids. Damon marvels at her having it figured out. Elena kisses him. Elena wants to know where he would be in five hears. Before he can answer Caroline gets temperamental again. Stefan assures her they will escape soon. Caroline wants a distraction and kisses Stefan. Damon throws in some police reports. Damon tells her it would have been hard for her mother to cover all of that up.

Lily is having trouble with ordering something to eat. She explains to Enzo that this is the first time she has ever been in a restaurant. Enzo reminds her that she made him a vampire and then left him alone on a ship full of dead people. Lily tells him she was captured and she would never have left him. Lily tells him she managed to survive on two drops of blood a week while her companions starved. Lily tells him that Bonnie didn’t show up for their lunch date. She tells Enzo Bonnie is supposed to help bring her companions here. Enzo isn’t buying it.

Matt gives Bonnie a call while he attempts to change the bandages from his stab wound. Matt tells her Enzo and Lily took off. Bonnie hears them she grabs the Ascendant just as they walk in. Lily tells Enzo that’s the only way she can get to her family. Enzo reminds her that her real family is in that house with here. She becomes angry and tells Enzo to leave. He does.

Damon tells Elena if she was human she would be with Stefan. Elena admits she will never accept being a vampire one hundred percent but as long as she has him she will be able to live with it. Damon’s mom calls and ask if he took the Ascendant. Damon suggest she could have forgot where she put it. Lily tells him she did no such thing. Damon tells her that he doesn’t have it. Lily tells him to find it or she will destroy the cure.

Caroline lets Stefan know she knows he has been playing her. Caroline snaps his neck. She goes to the bars and kicks them down and leaves.

Damon gets to Bonnie just as she is about to destroy the Ascendant. Damon tells her to stop or his mom will destroy the cure. Bonnie sets it on fire and tells Damon if he wanted Elena to,have it he would have already given it to her. Bonnie says she has never seen Damon as scared as he is now. Bonnie holds the Ascendant how for him to take and tells him he can watch Elena grow old and die and let loose people who want to kill her and anyone who doesn’t agree with them. Damon doesn’t reach out and take it from her.

Caroline is speeding along when a cop pulls her over. The cop is her mother. Liz tells Caroline to get out of the car. Caroline does and her mom slams her onto it. Caroline says she is her daughter. Liz says she isn’t because her daughter was caring and compassionate. Caroline snaps wake it was just a dream Stefan put in her head. Stefan puts his hand out and offers to help her. Caroline stabs him and insist she doesn’t want his help she wants him to die. Caroline shoves the knife in further. Stefan ask her to stop and then he shows her a memory. It’s Stefan with Liz and he tells her how upset Caroline was she the bear she dig up fell apart. Liz says she wants Stefan and Caroline to be more than just friends. Stefan tells Liz that now isn’t the time. He wants the moment to be perfect with no grief or loss. Liz tells him he may have to wait awhile. Stefan tells her he is patient and can wait. Stefan offers to mail the letter for Liz. Liz says she isn’t done with it and will mail it tomorrow she tells Stefan she has a idea of what she wants to say and she guesses she just wants it to be perfect too. Stefan tells Liz she is a good mom and then the memory fades. Caroline pulls the knife out and tells Stefan she wants to see the rest of it. Caroline walks in to the memory as Stefan walks out and the door shuts in her face. Caroline begins to cry and tells her mom she wants to tread her letter and she ask her mom to come back. Caroline stands outside the door and cries. Caroline wants Stefan to make Liz comeback. Stefan tells her he can’t. Caroline wants to read the letter. Stefan reminds her he already gave it to her. Caroline grabs some of the ashes. Caroline is in tears and admits it’s all her fault. She breaks down and says she has ruined everything. Caroline remembers everything she has done with Stefan and freaks out. Stefan tells her it’s okay. She tells Stefan she is sorry. Caroline is back but she is one hot mess.

Damon tells Lily he couldn’t get the Ascendant. Lily says he knows what is going to happen. Damon says it’s going to be like old times he screwed up and she is going to punish him. Lily says some things never change. Lily throws a box in the fire.

Elena finds a box that is for her. Elena thinks it’s one thing when it turns out to be another. Lily tells Damon that having Elena forever isn’t a punishment and shows him the box she threw in was empty. Elena walks in and ask if it’s the cure. Lily tells Elena she left it for her because Damon had no intentions of giving it to her. Damon tells Elena he can explain everything. Lily leaves.

Alaric gives Stefan some blood. Stefan tells Alaric that Caroline doesn’t want to see him. Jo tells him he needs to let Caroline decide what she wants. Alaric and Jo leave.

Caroline is looking at the path of destruction she left behind her all thanks to Damon’s police reports. Caroline looks at the ashes of her mothers letter and she begins to cry again. Stefan walks in and ask her if she is going to be okay. Caroline tells him after all she has destroyed nothing is okay. Caroline tells him she won’t turn off her humanity again and then she leaves. Stefan chooses to let her go and not follow.

Enzo is with Lily and he tells her that loyalty means a lot to him too. Lily begins to tell him about a car that almost hit her. How she could hear the drivers heart beating and before she knew she had ripped him apart. She ripped his head off which goes to,prove the old saying like mother like sons. Enzo can see all the blood on her and the car. Lily looks distraught and ask Enzo what she’s done. She starts crying. Enzo holds her and tells her it will be okay. Lily breaks down in his arms and holds him close.