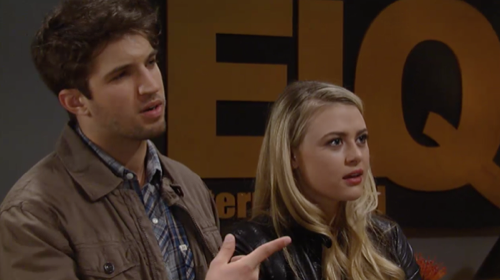 Monday – Nathan runs into Ellie who promptly spills her shake on him. She apologizes and he tells her not to worry. Ellie is distracted by his chest while she watches him out on a new shirt. Soon enough they realize who each other are and they play the blame game. Then they both realize that they are the only ones to blame for the Maxie and Spinelli mess they are in.

Lulu shows up at Maxie’s to complain about Valerie. Maxie in turn complains about Nathan and Spinelli. Maxie insist she is happy with her life with Spinelli and Georgie. Lulu decides to leave and go home to make Dante dinner.

Valerie is busy packing to leave when Dante walks in. Valerie tells him she doesn’t want to cause Lulu any trouble. Dante,convinces Valerie to stay and she ends p making him dinner. Dante raves about her cooking and Valerie begins to cry. Dante has just put his arms around her to comfort her and Lulu walks in.

Carly sees Ric and Liz having dinner together. Carly thinks Ric is up to his eyeballs in the Hayden business. Carly is about to tell Ric she figured it out when Spinelli stops her. Spinelli apparently saw Hayden with a guy talking about business. Carly wants Spinelli to,Rome the guy.

Liz is questioning Ric about what Carly wanted when Carly appears. Liz ask Carly what she was going to say to Ric.

Nikolas realizes the ring is gone and has a mini freak out. Spencer comes flying in and complains about his face and tells,his dad Emma declined to be his girlfriend even after he tried to give her a ring. Nikolas ask what ring exactly. Spencer tells him it was the one in the safe. Nikolas ask where the ring is and spencer says he doesn’t know because he got upset and threw it across the room. Nikolas who is clearly in overdrive at this point scolds spencer and tells him he will discuss his punishment with him later.

Spinelli comes home to Maxie cooking dinner. Spinelli heads off to Georgie’s room. Maxie can hear him talking to Georgie through the baby monitor. Spinelli tells Georgie he has the family he always wanted. Maxie looks torn.

Tuesday – Maxie and Spinelli are talking about Georgie when he gets a text from Lucy wanting him to do a routine with Ellie at the Nurses Ball. Spinelli would rather do the Magic Milo number. When Maxie brings up doing the routine with Nathan Spinelli quickly changes his mind. He brings up Hayden and Maxie thinks he should get Sam to help him.
Ellie and Nathan run into Lucy who suggest they go to the Nurses Ball together. Ellie isn’t on board until Nathan points out it could make Maxie and Spinelli jealous.

Lulu is not happy to see Valerie in Dante’s arms. Dante tells her he asked Valerie to stay. Lulu is down with that as long as she stays at a hotel. Valerie doesn’t have any money. Lulu says she might be able to stay at Nikolas’s since he needs company. That’s not all he needs.

Sam ask Nikolas about the ring. He claims he got it from Helena and meant to give it to her but forgot after Spencer was hurt. Nikolas tells Sam he is sorry. After he leaves Patrick gives Jake a ride home. When he gets back Sam says the ring is proof that Jason isn’t coming back and she now has closure and can enjoy her life with Patrick. What the hell was she doing before?

Hayden walks in and Carly takes her over to Ric and ask if she knows him. She says she doesn’t. Hayden brings up her amazing sex life with Jake. Carly tells her Jake says different. Hayden leaves. Jake walks in and Carly gives him a drink. She promises he still has a chance with Liz. Jake leaves and Carly promises herself she will tell him the truth when she has her proof.

Nikolas is at home breaking things when Hayden walks in and strips down to nothing but lingerie. They end up having sex.

Wednesday – Shawn makes Jordan breakfast and they declare their love for each other. They decide to go to the Nurses Ball together as a way to start fresh.

Anna runs into Duke and wants to talk but Sloane calls and tells her he found out something about Duke she needs to know.

Julian ask Carlos about the hit on Duke. Carlos says he can’t get close enough. Julian suggest he do it from the terrace of a nearby room. Carlos says they won’t rent him a room. Julian says they don’t have to they can use Jake’s room.

Spinelli sees Jake who ask him to drop the case he and Carly are working on. Spinelli then meets with Sam. Sam helps him find the guy by using his class ring. They find out his name is Pete Ross.

Sloane tries his put you in jail for free card tactics on Jake. Jake uses the I will tell Julian what is really going on here card on Sloane. Neither looks like they are backing down.

Carlos breaks into Jake’s room and sets up his gun.
Anna is visiting with Patrick when Jordan calls and she has to leave.

Jake finds Julian and let’s him know he has something to tell him.

Felix lets Sabrina know the test haven’t been run yet and gives her a package that came for Carlos. Sabrina calls Carlos.

Kiki tells Morgan she fesses up to Julian that they drugged Michael. Morgan is angry. Kiki wants to get the pills back.

Jake tells Julian he knows about the hit and even offers to help. Julian thanks him but says he promised Sam he wouldn’t put him in danger. Julian leaves just as Jake gets a call from Sloane.

Carly knows Pete is they guy in the wedding photos and tells Spinelli they need to get them.

Carlos is attempting to take out Duke but things keep getting in the way like TJ and Sabrina calling and the Carly and Spinelli come in to get the wedding picture. Finally Carlos is alone and he takes aim again but TJ is still in the way.

Spinelli ask Carly what she plans on doing. She tells Spinelli she is going to tell Jake before she tells the police.

Anna is met by Jordan who tells her she wants out. Anna tells her about the hit. Jordan says it could be anyone. All the while Duke’s bodyguard has his gun aimed at Jordan.

Felix comes back with the results and tells Sabrina she was right Michael was drugged.

Sabrina shows Michael and Sonny the lab results. Michael says he knows who drugged him just as Kiki and Morgan walk in.

Friday – Silas sees Nathan who ask about his patient. Silas tells Nathan that she does. Nathan tells him he is no longer a suspect.

Kiki and Morgan come in. Morgan denies any wrong doing. Michael pushes him and pills fall out. Kiki comes clean. Sonny chews Morgan who gets pissed and takes off with Kiki. Sonny tells Michael they need to focus on finding Avery. Michael thanks Sabrina.

Anna manages to get Jordan out of the line of fire just in time. They both shoot back. Anna makes up a lie to tell Sloane after she calls him.

Hayden is next to interfere in Carlos’s hit. Hayden threatens to call the cops but Carlos says he works with Jake. Carlos heads out after lying to Hayden.

Shawn takes Jordan to get a drink.

Duke is furious that his bodyguard took a shot with Anna standing there.

Jake is pissed at Sloane and when Carly shows up to tell him about Hayden he isn’t interested and before she can say anything Anna shows up. Jake says he wasn’t the shooter. Anna knows because she knows Jake wouldn’t have missed. Jake tells her he doesn’t know anything and Anna leaves. Jake leaves before Carlos can tell him about Hayden.

Anna finds a button lying on the pier.

Hayden tells Jake about Carlos being in their room.

Sonny tells Carly all about what happened at ELQ.