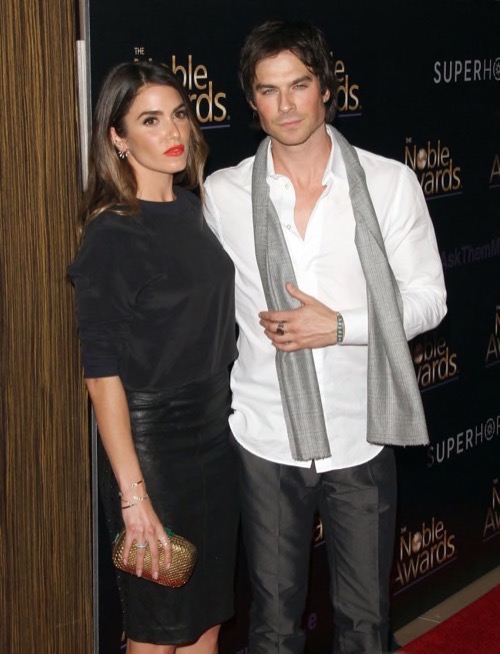 Ian Somerhalder and Nikki Reed are officially married. The Vampire Diaries star and Twilight actress were reportedly married in a romantic wedding on Sunday April 26 in Santa Monica, California. Ian and Nikki Reed scandalously began dating in July 2014 after he parted ways with his TVD co-star and long-time girlfriend Nina Dobrev. Nina was actually best-friends with Nikki Reed, but their friendship quickly dissolved when Nikki began dating Nina’s ex.

Ian and Nikki shocked everyone when they confirmed that they were engaged and were planning a wedding in December 2013 – even though they had only been dating a whopping five months. The 36 year old Vampire Diaries star was apparently in quite a rush to settle down and get married, and he picked the perfect girl because Nikki Reed has a reputation of rushing in to relationships and marrying men that she barely knows.

According to a report from E! News, Nikki Reed and Ian Somerhalder requested that the guests at their low-key ceremony at Sunset in Cali donate money to their animal rescue charity in lieu of gifts. Ian and Nikki’s love for animals and rescue efforts are said to be one of the main things that the couple has bonded over during their very short engagement.

So far Ian Somerhalder’s ex Nina Dobrev has not commented on her ex-boyfriend and ex-BFF’s wedding, although she did recently shock everyone by quitting The Vampire Diaries after six seasons. And, now it all makes sense. Obviously Nina hated Ian and Nikki rubbing their relationship in her face on the set of TVD, but the thought of them actually getting married was the ultimate stab in the back.

Are you as shocked as we are that Ian Somerhalder and Nikki Reed are married, after dating for less than a year? Do you think that their marriage will last? Did Nina Dobrev quit The Vampire Diaries because she knew about Ian and Nikki’s upcoming wedding? Let us know what you think in the comments below!