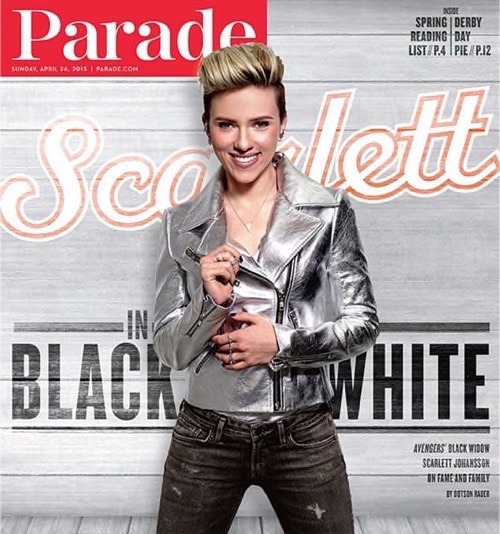 Scarlett Johansson is done and dusted with her ex-husband, Ryan Reynolds, and she’s happier than ever with her new family. Scarlett has thrown pointed shade towards Ryan in the past, but I think this is the first time the shade and disses have been so direct – and obvious.

In a new interview with Parade Magazine, Scarlett is asked about what it takes to make a marriage work, and she explains, “It takes a lot of work. It takes a man who’s not only confident in the love that you have for one another, but confident in what he has going on in his own career. He has to be in a field that’s completely different from yours….”

She also mentions, “Acting is a very strange world to be co-existing in. It’s very volatile. There’s always going to be the more successful person. It’s related to rejection….”

And therein lies the crux of the problem. Even though she’s not saying it directly, Scarlett Johansson is hinting at the demise of her marriage to Ryan Reynolds being caused by her success. As Scarlett Johansson was becoming the female face of Marvel [via the Black Widow], a bona fida action star, and a Tony award winner, Ryan Reynolds’ career was floundering among a series of flops. And she’s basically admitting that Ryan’s ego couldn’t handle that, and it ended up taking a giant toll on their marriage.

Of course, Scarlett seems much happier with her current husband, Romain Dauriac. But then again, hindsight is 20/20, isn’t it? Scarlett knew what to avoid the second time she got married, and she made sure that she didn’t make the same mistakes twice. And it paid off – she has a kid, she has a sterling career, and for all intents and purposes, a stable private life.

What do you guys think of Scarlett’s words? Was she dissing Ryan Reynolds or not? Let us know your thoughts in the comments below.