The Originals REVIEW: Season 2 Episode 20 “City Beneath the Sea” 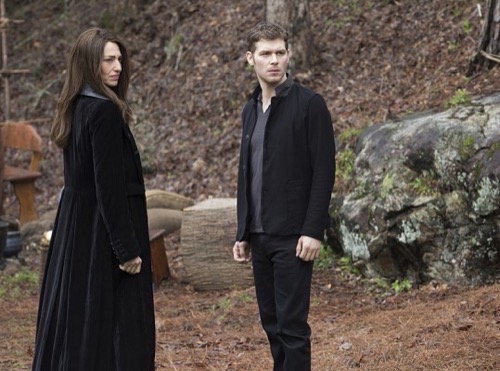 Here is The Originals Season 2 Episode 20 Review: ‘City Beneath the Sea’ review. Click HERE for more recaps of The Originals…

Dahlia is doing a spell of some sort. Haley and Jackson arrive safely in the bayou. Rebekah and Elijah are mourning over Klaus who is in a coffin. Davina is trying to find a way to get Kol back. Freya is all alone.

Dahlia brings Klaus into her own little world. Klaus isn’t pleased a bit by these turn of events. Klaus sees the blood on his chest and demands to know what she has done to him and where his daughter is. He wants Dahlia out of his head. Dahlia tells him that he is in her head and he is lying daggered in a coffin courtesy of his brother. He looks down and sees the blood on his chest and asks what she’s done and where Hope is. He tells her to get out of his head but she says he’s in hers and says he’s lying daggered by his brother’s hand. Dahlia wants him to listen. Dahlia takes him to a scene of Vikings running around slaughtering people left and right. Dahlia is doing her best to protect Esther. Vikings haul them both off. Dahlia tells Klaus she wants him to be her ally in her fight.

Freya tells Elijah she is not happy that little Hope is gone and demands that she be brought back so she can be used to get Dahlia. Elijah thinks Freya has lost her mind. Elijah says she won’t allow it. Freya says she can find Hope with or without his help.

Marcel meanwhile is attempting to convince Rebekah to sit this one out. Marcel reminds her of she dies so do 18 other witches. Rebekah thinks she can take care of herself. So stubborn this one. Vincent who I admit I’ve missed comes by. They ask for his help in breaking the link between Rebekah, Davina, and the other teen witches.

Marcel is sent off so that Rebekah and Vincent can look for a spell.

Elijah calls and tells Haley that Freya is trying to find them.

Jackson is working on Aiden’s grave. Haley tells Jackson that Aiden deserves a Crescent Burial so the wolves will know that lives lost to protect Hope matter.

Elijah fills Rebekah in on Freya’s crazy plan to use Hope. Elijah decides to make a proxy with some dark objects he has to trick Dahlia into making a appearance. Elijah wants Vincent’s help. Vincent declines a and Elijah becomes enraged and begins choking him. Cami gets him to stop,by telling him she will call Davina. Elijah tells her they only have until night falls.

Marcel finds a heartbroken Josh packing his things to leave New Orleans. Josh finds one of Aiden’s shirts and tearfully tells Marcel he didn’t get to tell Aiden bye.

Next on the Dahlia memory tour she brings Klaus to where she was kept. She tells Klaus she used dark magic in order to keep Esther safe. Klaus is less than interested. Dahlia tells him that Esther didn’t want to leave Mikael and she didn’t want to leave Ether. Klaus begins to see their similarities.

Davina, Rebekah, and Cami are working in a way to get Hope’s essence into a proxy. Davina thinks they can use a golem.

The werewolves are getting ready to bury Aiden.

Jackson talks to Haley while she feeds Hope.

Dahlia tells Klaus that she simply wants to take Hope and teach her how to control her magic.

Marcel and Elijah are debating what they should do with Klaus. Elijah says she isn’t ready to let loose all of Klaus’s Shakespearean rage. Lol. Elijah thinks its best if he stays the way he is until Hope is safe.

Cami talks with Vincent. Vincent tells her the Coven wants him to be their leader. Cami tells Vincent she would like for him to help them with the proxy.

Marcel lets Haley know that Klaus didn’t kill Aiden. He also tells her to be a leader to her people and not a friend.

Freya lets Elijah know she has found Hope. Elijah tells her he will go get her and bring her to Freya.

Elijah comes to warn Haley about Freya. The werewolves are having none of that. Jackson is even being a dick. When Haley shows up Elijah tells her all about his plan to trick Dahlia and all he needs is some of Hope’s blood.

Dahlia tells Klaus to think about her proposition. Dahlia then tells him there is one other little thing in order for it to work Haley has to die. Dahlia blows some kind of magic dust in his face and Klaus wakes up. Klaus pulls the dagger out.

Jackson and Haley have a heart to heart. Jackson assumes she wants to return back to her home with Klaus. Haley tells him she would rather stay there with him. Haley also lets him know she invited Josh to say goodbye to Aiden.

Freya is working on a spell over one of Klaus’s paintings. Elijah comes in and tells her he can’t risk Hope being harmed. Elijah grabs Freya and shoves a needle in her. Freya demands to know what he did. Elijah tells her he injected her with Hope’s blood and Dahlia will now be hunting her.

Josh says a heartbreaking good bye to Aiden and kisses his head. Josh said he never thought about his immortality until now. Haley hugs him. Jackson and Josh push the boat Aiden is lying in into the swamp and they watch it float away.

Hayley calls Elijah and leaves a voicemail. She tells Elijah goodbye. Haley says she and Hope can no longer be a part of his family. Rebekah is listening with him and Klaus happens to hear the end of it. Elijah who is devastated says she understands. Rebekah also gets it.

Klaus does the unthinkable and agrees to work with Dahlia. Dahlia tells him she always knew he was the smartest of the bunch. She reminds him that Haley will have to die. Klaus tells her he is fine with that and that he never really liked her. Dahlia ask what about his siblings. Klaus tells her they have more than earned it. Klaus tells her to hurry because Haley is planning on leaving with Hope that night.

Dahlia creates a storm in the bayou that prevents Haley and company form leaving.