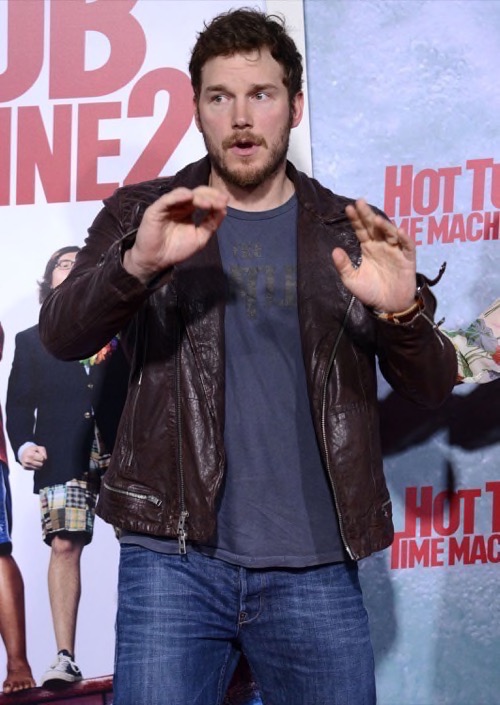 There’s this new wave of Hollywood movie stars who keep talking about how and when they’re going to quit acting – and then never actually do. First it was Angelina Jolie, then Chris Evans [among a multitude of others], and now it’s Chris Evans’ fellow Marvel star, Chris Pratt.

Chris Pratt is currently promoting Jurassic World and in an interview with Glamour Magazine, Chris reveals, “I don’t think we are the kind of people who need to be in a $50 million house, Jack needs to be in yelling distance. Most important for us now is to keep this train rolling. Anna with her TV show, me with my movies and hopefully make it through to hit that number and then graciously exit stage left.”

Well, that’s just depressing, isn’t it? Chris is clearly plotting his departure from Hollywood already, even though he literally JUST hit it big with Guardians of the Galaxy. Plus, he probably has a bajillion picture contract with Marvel Studios and Disney, so I don’t know who he thinks he’s kidding by talking about his exit strategy. He can plot and plot all he wants, but he’ll be done with Marvel when his contract is up – and that’s IF he doesn’t want to re-sign for the likely ludicrous amount of money that they’ll offer him.

Plus, he’s still promoting what’s bound to be one of this summer’s biggest movies, Jurassic World. Should he really be talking about quitting Hollywood when he’s about to star in such a big blockbuster?

What do you guys think about Chris Pratt’s words? Do you think he’ll actually end up quitting Hollywood, or will he end up backtracking and taking back his words the minute he gets backlash? Let us know your thoughts in the comments below.