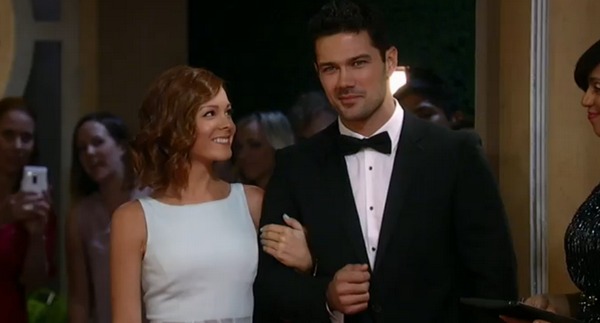 Monday – Obrecht and Franco get into it over Nina. Franco says she didn’t kidnap the baby. Obrecht claims there is proof that says otherwise. Obrecht shows him surveillance video of Nina acting shady. Franco begins to question how much he really knows about Nina.

Nina is looking up the story in the web when Nathan pops by. Nathan shows her the video. Nina admits she checked on the baby but then left. Nathan leaves and Franco comes in and starts going through Nina’s purse. Nina walks in on him.

Sonny tells Carly all about Morgan and Kiki drugging Michael. Curly is livid and takes off with Sonny right behind her.

Lulu and Valerie show up. Valerie gushes over Dante and Lulu fakes a smile. Valerie offers to help Lulu out with the nurses ball and Lulu says no. Valerie says maybe she should just leave. Lulu then says that Valerie can help her and then talks about the ball.

Michael lets Dante in in what Morgan and Kiki did, Dante heads out to find them. Michael thanks Sabrina and then kisses her.

Kiki and Morgan find Avery at her apartment. Before they can figure out how she got there Sonny and Carly show up. Dante knocks on the door.

Tuesday- Lulu convinces Valerie that she will be able to stay at Nikolas’s. Lulu heads out to see him.

Valerie is with Olivia when she starts having labor pains.

Nina and Franco start arguing. Nina throws him out.

Rosalie tells Nikolas that Franco has Ned shares of ELQ. Lulu comes in and Nikolas lets her assume he is dating Rosalie. Lulu convinces him to let Valerie stay there. When Lulu leaves he calls Rosalie and lets her know what’s going on.

Dante arrest Kiki and Morgan for drugging Michael. Sonny wants to have Avery disappear. Carly begs him not to pick one child over the other one so Sonny comes up with a plan.

Sabrina pulls away but Michael insist what he feels for her is real. Ned interrupts so Sabrina takes off.

Sonny shows up later and tells Michael he has to drop the charges against Kiki and Morgan and he will give Avery back. Michael largess as long as Sonny stops contesting his guardianship. Sonny agrees and returns Avery .

Morgan and Kiki are at the police station pacing and worrying. A cop comes in and tells them they are free to go.

Sabrina tells Felix all about Michael. Felix ask her how she feels about him but before she can answer Valerie brings Olivia in,

Dante arrives and is worried. Sabrina lets him know everything will be ok. He hugs Valerie just as the elevator opens with Lulu in it.

Wednesday- Brad and Lucas have coffee together, have sex and then Lucas heads out for his practice for the Magic Milo number. While Brad is getting dressed he gets a knock at the door and he is stunned at who he sees.

Lulu takes Valerie to Nikolas’s. Right and early. He is surprised to see them but gets his bearings quickly. Lulu ask about Rosalie. Nikolas isn’t sure if they are going to the ball together. Lulu convinces him to take Valerie and then she leaves.

Olivia wakes up to find Ned stayed at the hospital with her all night. Ned declares his love for her and the baby. Dante comes in and visits with his mom while Ned sees if he can get her released. Dante takes off to find Lulu.

Sam thanks Jake for finding Jason’s ring and then presents him with two tickets to the nurses ball. Jake declines at first since he has no desire to be anywhere near Ric. Sam shares his sentiment 100%. Sam thinks Jake is a better choice for Elizabeth. Jake finally agrees to go to the ball.

Molly tells Elizabeth how happy she is she took her father back. Molly talks about him signing up for a dating site and going on a date but finding out that the woman was married. Hint hint.

Hayden hits Ric up for more money. Ric says he will get to her and to take a hike before they are scene together. Too late there’s TJ getting a eyeful.

TJ tells Molly all about it. Molly thinks he is mistaken.

Ric later tells Molly he will be proposing to Elizabeth that night.

Meanwhile Jake and Elizabeth just happen to run into each other.

Carly finds Pete and after about two seconds realizes Ric is behind the whole scam. PCPD should give her a job.

Hayden gets caught with Nikolas by Valerie. When she leaves Hayden demands to know how many women he is sleeping with.

Sam overhears Olivia admit that the baby she is having is Julian’s. Sam is shocked.

Carly also figures out in about another two seconds that Pete is blackmailing Ric. Carly tells Pete she has way more money than Ric. Pete is at Carly’s service. Carly hauls him back to Port Charles with her.

Molly thinks her dad should wait. Ric assures her everything will be ok. Molly hugs him.

Jake and Elizabeth are fighting the urge to finish what they started before they were rudely interrupted. Elizabeth brings up Hayden stating they are getting it on. Jake tells her Hayden is a lying liar who lies. Jake tells Elizabeth she is all he thinks about. Elizabeth admits she misses Jake. They almost kiss but the lying liar shows up. At the Metro Court, Ric shows Molly the ring he picked out to propose to Liz with, but Molly asks Jake takes Hayden aside to talk. Elizabeth goes back in the ballroom with Ric.

On recent comes a upon a stunned Sam and ask her if she is ok. Obrecht starts giving her the third degree and Patrick steps up and tells Obrecht to shove it. Obrecht gets a message and walks off. Sam tells Patrick what she heard and tells him she doesn’t know what to do. He suggest she wait and tell Julian after the ball.

Britt is the one at Brad’s door. They grab each other and jump up and down. Britt talks nicely of Faison and like Brad I wonder what drugs he has given her. Britt is back for the nurses ball. Brad tells her all about him and Lucas and then indulges her curiosity when she ask about Nikolas. Britt wants to see her mother. Knock knock why it’s mother at Brad’s door. Obrecht sends Brad off to work and then tells Britta to come out. Britt ask how she knew. Cesar told her. Britt and Obrecht hug.

Friday- Britt and Brad make fun of the people on the red carpet. After awhile Brad has to leave to go to the ball.

Brad tells Lucas he will be there for the opening act.

Sam and Patrick end up walking the carpet behind Ned and Olivia Sam tells Patrick it’s ironic she is walking behind the woman that is carrying her little brother or sister.

Spinelli and Maxie get some face time on tv. Speaking of faces you should see Maxie’s when she spots Nathan and Ellie together. Maxie grabs Spinelli and practically drags him inside.

Lucy per usual has a thousand and and one dresses and claims she has nothing to wear. Felix nips that in the butt.

Carly hides Pete. Carly runs out and spots Ric she rushes over and tells him she is happy for him. Carly really meant she was happy for herself.

Lucy who finally picked a dress gets on stage she introduces the Nurses who do a number. Then Obrecht appears and starts doing her own version of 99 Red Balloons. She pops some of the red balloons Elizabeth was so frantically trying to blow up earlier. Once it’s over Lucy quickly gets her off the stage.

Carly snags Spinelli and takes him into the control room.

Molly brings Elizabeth a box she is supposed to open while Ric is on stage. Ric gets up there and talks about second chances and then ask Elizabeth to open the box. Inside is the wedding ring he got for her. Ric starts to sing Marry You. Carly has the picture of Pete and Hayden pop up on the screen behind him. Then in true Carly form she rushes up to the stage and grabs the microphone. She can barely contain her glee as she has Pete come up there with her. Pete explains everything including that Ric paid him to pretend to be Jake. Elizabeth leaves. Ric follows her and is slapped and told he isn’t good enough for her and she never wants to see him again. Elizabeth out.

Jake is laying into Hayden. Hayden says she only lied about who he was everything she said about herself was true.

Carly rubs some salt in Ric’s wound and then she orders Hayden to get the hell out.

Nikolas finds Elizabeth and listens as she complains about Ric and worries about Jake. Elizabeth tells Nikolas she will be with Jake. Nikolas not knowing what else to do blurts out that Jake is Jason.

Lucy who is trying to save face calls Brad up to finish Ric’s song. Brad does and then he rushes over to Lucas and ask him to marry him.