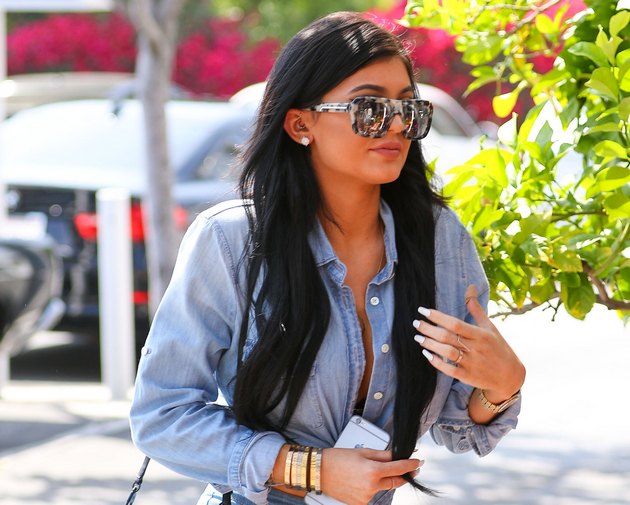 Kylie Jenner has finally, FINALLY admitted that she’s gotten lip fillers, but she added a caveat – that they are supposedly ‘temporary’ lip fillers.

For the past year, Kylie has been showing off her new and suspiciously plumper lips, and claiming that it was all because of makeup, lipstick, lighting, angles, etc. However, Kylie [on the new season of Keeping Up With the Kardashians] had finally admitted the truth, explaining, “I have temporary lip fillers, it’s just an insecurity of mine and it’s what I wanted to do. I’m just not ready to talk to reporters about my lips yet because everyone always picks us apart. I want to admit to the lips, but people are so quick to judge me on everything, so I might have tiptoed around the truth, but I didn’t lie.”

Well, people are quick to judge you BECAUSE you lie all the time! If you had just owned up to the lip plumping, then nobody would have said anything else about it, except maybe an article or two about how all the Kardashians are addicted to plastic surgery. But as it was, we went through several periods of speculation concerning Kylie Jenner’s possibly plastic surgery-ized lips.

And yes, temporary lip fillers aren’t technically plastic surgery. Usually, whatever temporary augmentation [via Juvederm or Restylane] is put into the lips goes away after a few months. But honestly, I don’t see Kylie stopping at temporary lip fillers – I see her making her new lips permanent, and then I wouldn’t be surprised if she continued with various other bits of cosmetic surgery here and there. Maybe a nose tweak here, maybe some cheek implants there, a boob job here, a butt implant there. Her entire family is used to it, so why wouldn’t she dabble in it as well?