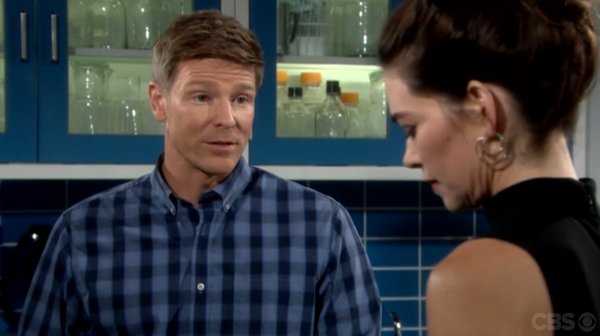 Monday– Anita tries to build Gabriel up to Chelsea. Chelsea thinks he is the biggest mistake of her life.

Billy and Victoria bring each other up to speed on the fact they are both single.

Nick and Victor discuss Adam who appears. Then Victor leaves and Adam and Nick argue over Sage and Chelsea.

Victor tells Chelsea she will be working with Victoria and Gabriel.

Abby is with stitch when Ashley walks in and tsk take them both. Abby insist what they have is real. When Abby leaves she yells at Stitch for sleeping with her daughter.

Victor walks in with Chelsea. After he leaves her and Victoria get into it. Chelsea lets her know she is going to make her life a living hell and leaves. Ashley praises Victoria for telling Chelsea off.

Kevin thinks they should tell Paul about the fake video. Summer wants to know who killed Courtney and Austin.

Paul and Dylan get into it over Sharon. Paul tells Dylan Sharon needs to confess. Noah calls Dylan and he leaves.

Adam and Billy get into it while Billy is packing his stuff to leave. Chelsea comes running in and Billy calls her a con and trash. Chelsea tells Adam Billy is right about her.

Kevin and Noah recruit Dylan to help them prove the video is fake. They think Dylan can convince Paul Sharon is innocent.

Dylan goes to see Paul and they can’t look because Paul’s computer is broke and Austin’s disappeared.

Dylan tells Noah what happened. Kevin says the killer knows what they are doing.

Tuesday– Kyle and Phyllis are starting to catch on to the poser thanks to over head conversations and gaps in his memory.

Jack stabs Kelly with a pen. Kelly tells him if she dies so will he because no one knows where he is. Jelly passes out and Jack sees a cellphone.

Michael tells Sharon the charges should be getting dropped. Noah shows up and apologizes for not believing her. Michael falls asleep on her couch.

Abby and Stitch decide to come out as a couple at the reopening of the Underground.,

Jack calls the Kyle’s phone while he and Poser are in the Ferrari. Poser is shocked and there is a crash. Jack keeps yelling for Kyle.

Faith is nasty when Sage shows up for work. Nick apologizes.

Kevin wants to know if Nick knows the charges against Sharon might be dropped.

Sage tells Nick they need to keep their distance. Nick tells her she isn’t going anywhere.

Everyone is surprised when Sharon shows up.

Wednesday– Joe is having a bad day in therapy. Joe leaves to see a doctor and Dylan pops in. Avery and him get into it and Dylan leaves. Joe tells Sharon she can go but she refuses. Dylan catches them in a close moment.

Sharon ends up getting arrested at the Underground for breaking her house arrest.

Victor gets a call about the accident the poser was in and he takes off.

Michael does his best to get Sharon off the hook. Paul tells her she will be in lock up until her trial.

Poser is visited by Kyle. Kyle is sent to be seen himself. Kyle runs into Summer and tells her about the accident.

Phyllis is with the Poser when he wakes up and he says Victor’s name.

Kelly manages to get Jack put in a straight jacket.

Thursday– Joe wants Avery to leave. She refuses and they fight about it. Joe leaves to go see a doctor and tells her goodbye on his way.

Dylan finds out from Michael that Sharon was put in jail. Dylan tells him he is sorry he wasn’t there to keep her in line.

Dylan tells Sharon he will get her out of jail. Sharon sees the text form Avery and sends a reply to it. Christine comes in and tells Dylan and Sharon she is dropping the charges. Dylan and Sharon share a award kiss. Right away they regret it.

Christine tells Paul they need to catch a killer.

Dylan’s text to Avery tells her they both made their choice and she needs to finish what she started. Joe comes back and Avery tells him Dylan told her to stay. Avery tells Joe she won’t stay with him. Joe tells Avery not to go.

Poser codes and is put in a medically induced coma.

Michael and Lauren fight and she cries.

Michael hires a hooker to keep him company for the night.

Victor wants Neil to agree to lie and say the faked signatures of Jack’s are the real thing in case he dies.

Friday– Billy and Victoria discuss the merger papers and as to whether Jack ever signed them.

Kyle is blaming himself for his dad’s condition.

Phyllis and Ashley are arguing about the contract.

Devon and Hilary agree to have lunch together.

Neil and Victor convince Nikki to,sigh the merger papers even though she never saw either put the signature on it.

Nikki looks longingly at a bottle of liquor.

Lily gets Michael arrested for being with a hooker. Cane finally tells Lily what’s been happening with Michael and Lauren.

Lily tells Devon that Cane values Michael and Lauren’s marriage more than his and hers.

Lauren finds out Michael was with a hooker. Lauren can’t believe it and yells at him.

Cane finds the hooker and finds out all Michael did was talk about Lauren. Cane goes to,Michael and tells him they need to talk.

Lily and Lauren discuss Cane. Lauren tells Lily he is her God send.

Hilary tells Devon they should just be friends. Devon disagrees and kisses her.

Michael tells Cane that his marriage to Lauren is over.

Cane tells Lauren once Michael hits rock bottom he will come to his senses.

Meanwhile Devon and Hilary are in bed together.