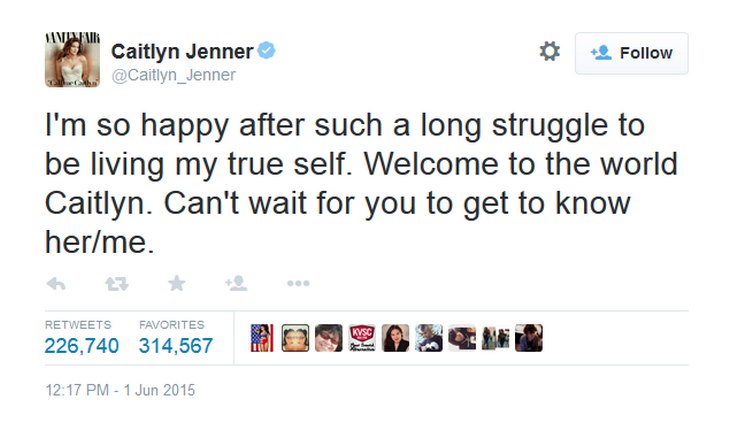 Caitlyn Jenner, formerly known as Bruce Jenner, made her world debut on Monday June 1 on the cover of the July edition of Vanity Fair – and she broke the internet far worse than her step-daughter Kim Kardashian ever dreamed of doing. When Vanity Fair released their all new cover, which featured Caitlyn in a white bodysuit with some impressive cleavage, the internet went in to a frenzy. Over the course of the last year we have watched her slow transformation – which she confirmed during her interview with Diane Sawyer on ABC’s 20/20.

Obviously, as soon as Caitlyn’s cover hit the internet, the Kardashians began tweeting out support for their former step-parent – Kim, Khloe, and Kourtney raved about the Vanity Fair cover on social media. But, everyone couldn’t help but notice that Caitlyn was throwing some slight shade at her former family. Caitlyn totally sounds like she should be a member of the Kardashian family. However, she purposefully spelled her name with a “C” instead of a “K.”

So far Caitlyn Jenner’s debut on the cover of Vanity Fair has received mostly positive feedback – aside from some ignorant comments on social media. If today is any implication, then Caitlyn’s new reality TV show on E! is going to blow Keeping Up With The Kardashians out of the water, and make a complete mockery of Kris Jenner’s ratings.

What do you think of Caitlyn, formerly known as Bruce, Jenner? Will you be turning in to her new reality TV show on E! Do you think she specifically spells her name with a “C” to diss the Kardashians? Let us know what you think in the comments below!