Iggy Azalea and her NBA player boyfriend Nick Young are getting married! It’s been a busy week for the “Fancy” rapper, who recently announced that she was cancelling her “Great Escape Tour.” Fans were heartbroken when Iggy Azalea confirmed that she was not finishing up the tour, ironically around the same time that rumors hit the internet that the tour was a bust and ticket sales were dismal.

Iggy insisted in an interview with Seventeen Magazine that the tour was doing just fine and the reason she cancelled “Great Escape” was because she needed a “mental break” and wanted to take a different artistic route with her music. 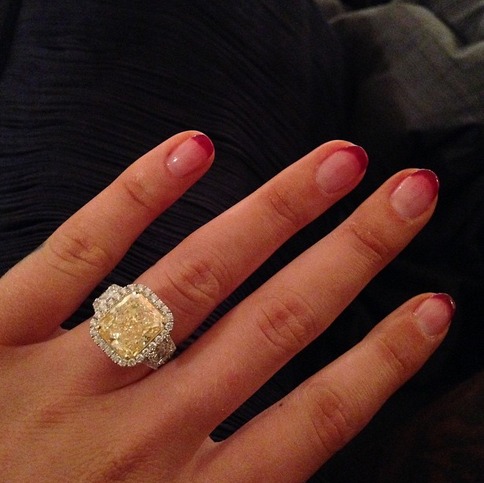 Regardless of why Iggy Azalea cancelled her tour, she won’t be sitting at home binging on ice-cream and crying over “The Great Escape” – she will be too busy planning her wedding! On Monday June 1 Iggy and her friends gathered in California for Los Angeles Lakers player Nick Young’s 30th birthday. Nick and Iggy have been dating for over a year, despite a few rough patches and alleged cheating scandals. At Nick’s birthday party he shocked everyone and got down on one knee and proposed to Iggy – she said “yes!”

After their engagement, Iggy Azalea and Nick Young, aka “Swaggy P,” flooded social media with photos of her gorgeous new engagement ring. Young reportedly helped design the 8.15 carat yellow gold ring – which is seriously making Iggy the envy of every single girl. There is no news yet on when Iggy and Nick Young plan to tie the knot, but we’re sure it will be a lavish wedding. The couple has been rather private in the past, so they may slip off and get married in a private wedding ceremony right under our noses. Congratulations Iggy and Nick!