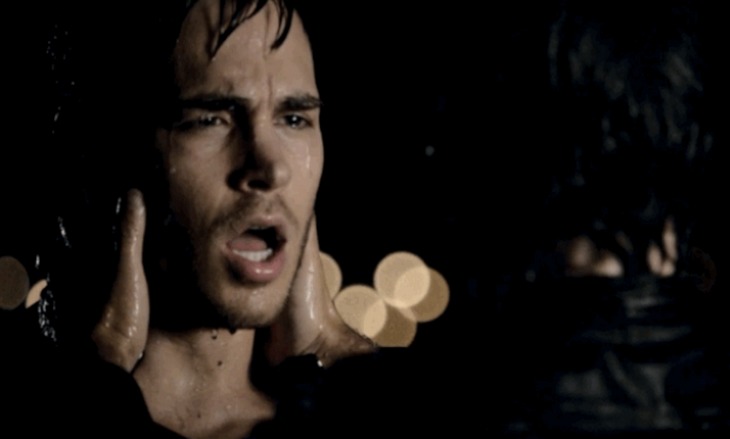 The Vampire Diaries Season 7 spoilers are rolling in, and a new promo video for the hit CW show has TVD fans going crazy! Now that Nina Dobrev’s character Elena Gilbert is gone, Damon Salvatore obviously needs a new love interest – but no one ever expected it to be a guy! It looks like there is a hot new vampire couple headed to The CW this fall, and Vampire Diaries fans are still in shock by the bizarre hook-up.

Have you ever wanted to see Ian Somerhalder kiss Chris Wood? Well, if so then you should definitely check out the sizzle reel that the cast of The Vampire Diaries shared at Comic Con. The first five minutes share the most romantic scenes ever airing on TVD, dating back to Season 1. So, basically a montage of Elena Gilbert making out with the Salvatore brothers.

But, the last 30 seconds of the promo video featured a spoiler clip from Season 7. Fans at Comic Con were shocked when they saw Damon and Luke standing in the rain professing their love for each other – and then sharing a hot kiss.

Luke has always been gay on The Vampire Diaries, but last time we checked Damon Salvatore was as straight as an arrow. As a matter of fact, Damon almost liked girls a little too much. The Vampire Diaries Season 7 spoilers are teasing that Damon and Luke are TVD’s hottest new couple. But, some fans aren’t buying it. Damon won’t stop at anything to get his way. Maybe his make-out session with Luke was just some sort of ploy to seduce him. Or it also could have been a dream sequence. What do you guys think? Is Damon Salvatore really gay?