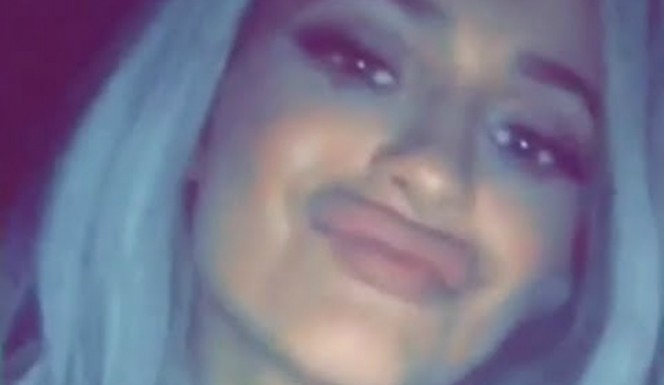 Kylie Jenner has some explaining to do! Was the 17 year old driving drunk and recording videos for SnapChat? Over the weekend Kylie Jenner uploaded a bizarre video on social media as she drove home from a party in the wee hours of the morning, and the Keeping Up With The Kardashians star appeared to be slurring her words and not making any sense.

There is no doubt in anyone’s mind that the video was recorded after a night of partying, because her pal Cara Delevingne uploaded videos earlier in the night of her and Kylie dancing provocatively – and she was wearing the same outfit. Of course the next day Kylie woke up after sleeping it off, and realized that her drunk driving Snaps had gone viral and she quickly deleted the self-incriminating video. But, the damage was already done.

Seriously, what is going on with Kylie Jenner? Ever since her boyfriend Tyga’s cheating scandal with transgender model Mia Isabella earlier this month, the troubled teen has been acting extra peculiar. The fact that she is partying more than ever is concerning enough, but that she is dumb enough to upload a video of herself committing a felony is a whole new level of crazy. The LAPD’s phones were probably ringing off the hook after Kylie shared a video of herself driving drunk – but there really is nothing they can do about it if they don’t catch her in the act.

Check out Kylie’s video and let us know what you think. Does she appear to be drunk? And, how crazy does she sound? Share your thoughts in the comments below!