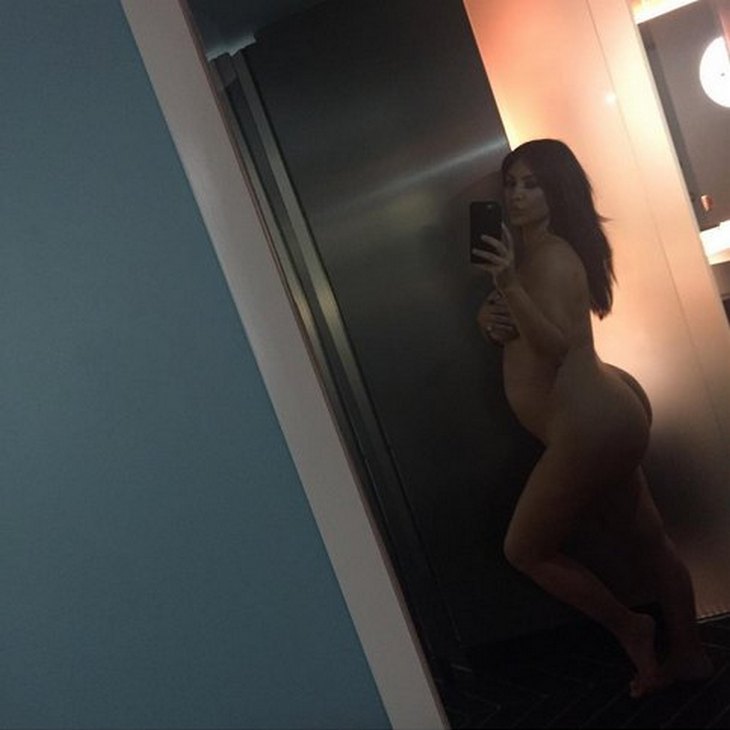 Want to see pictures of a naked and pregnant Kim Kardashian? Well, it looks like we are going to have to put a stop to the Kim Kardashian baby bump conspiracy theories. Ever since the Keeping Up With The Kardashians star announced that she and her husband Kanye West were pregnant with baby number two, rumors began swirling that Kim was faking her pregnancy, rocking a fake baby bump, and had hired a surrogate mother to carry their baby boy.

Kim Kardashian, being the hormonal loose cannon that she is on social media apparently grew tired of people accusing her of faking her pregnancy, and she posted a photo of herself very pregnant and very naked on Twitter to shut down the rumors for once and for all. We’re not doctors or anything, but we’re pretty sure the Keeping Up With The Kardashians star is really pregnant. A prosthetic baby bump doesn’t seem like a feasible possibility any more.

In the conspiracy theorists defense, there were logical reasons to suspect her of faking her pregnancy. After all a doctor told her on KUWTK that the odd of her getting pregnant were slim to none, and she has been packing on weight a rapid pace for any pregnant woman. Besides that, considering all of the Kardashian fakery – no one would put it past Kim and Kanye to try and fake a pregnancy and keep a surrogate mother out of the news.

We’re not sure how we feel about Kim Kardashian’s naked pregnant selfie. Kudos to her, she proved the world wrong – and she is really pregnant. But, she also proved all of the other haters right about her lack of class. What do you think of Kim Kardashian’s naked baby pics? Share your thoughts and theories in the comments below!