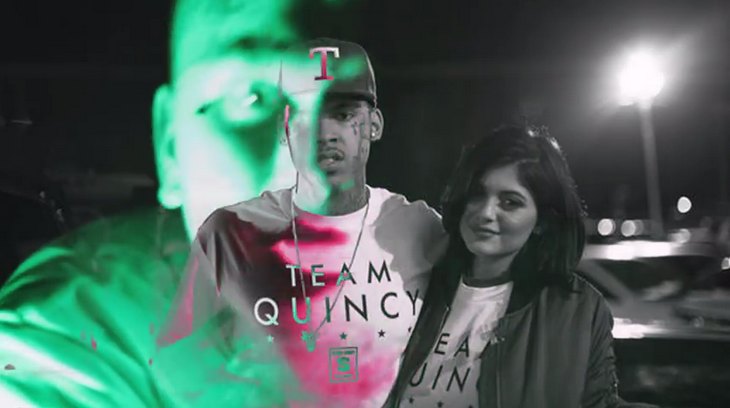 Kylie Jenner has some explaining to do! Tyga has been caught up in numerous cheating scandals, but it looks like the Keeping Up With The Kardashians teen may have been doing some dirt of her own. Two rappers that no one has ever heard of, Ink Monstarr and Stitches, leaked a new diss track and music video on YouTube – in which they claim that Kylie cheated on Tyga … with both of them.

The music video, which is appropriately named “Kyga” features both Ink Monstarr and Stitches rapping in detail about their hot and steamy hook-ups with Tyga’s girlfriend Kylie. And, in case you were wondering – Kylie’s lady parts smell “fishy.” Yeah, we’re disturbed on as many levels as you are right now. Some of the rather explicit lyrics read, “If she says she didn’t f*ck us she’s a liar / She’s a liar, she’s a liar / She’s a motherf*cking liar.”

Either Kylie Jenner is in big trouble, or these two rappers just orchestrated one of the most genius publicity stunts we have ever seen. Not only did their diss track blow up faster than any of Tyga’s recent bombs of songs – but they are getting a ton of attention. Hey, maybe having sex with Kylie Jenner could land them a record deal!

Now, this could really go either way. Believe it or not, there is a decent chance that Ink Monstarr and Stitches are telling the truth – the music video also features screen shots of messages between them and Kylie and photos of Kylie posing with them. So, these guys aren’t coming completely out of left field – they definitely know Kylie Jenner. But, did they actually have sex with her?

Check out the music video and let us know what you think in the comments below. Did Kylie cheat on Tyga?