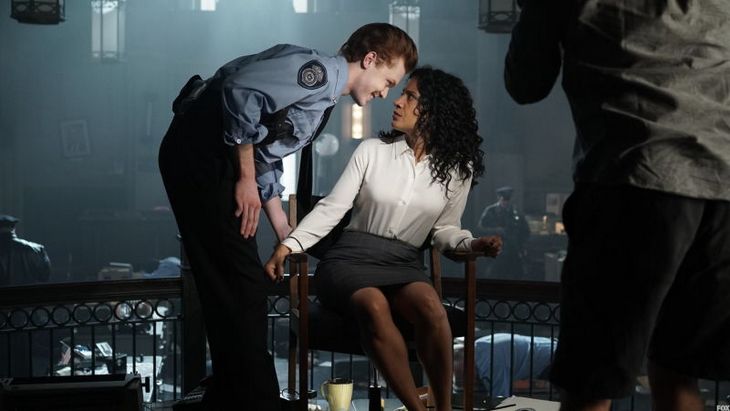 Here is the Gotham recap and review for season 2, episode 2 – ‘Knock, Knock’. Click here to check out all of Hollywood Hiccups television show recaps and reviews…

The Mayor of Gotham is being tourtured….by tortured I mean they have a itsy-bitsy spider and he taps out. Galavan tells the Mayor monsters are coming to cleanse the city in blood and fire. The Mayor says he will send a letter of resignation to his secretary and then pack up and leave town.

By the time the sun comes up the whole town can see the Gotham Gazette asking where the Mayor is and accusing him of having a secret lover.

Speaking of newspapers on the roof of the newspaper building there are a few asylum escapees playing let’s see whose guy hits the ground the fastest. They have their ummmmm victims in straight jackets. They write Maniax on the jackets before they throw them off. All but one who Jerome decides needs a pretty exclamation point instead. Over he goes.

Gordon is telling the entire police station about some prisoners that escaped from Arkham. They all are apparently bat shit crazy (in this town is there any other kind?) and have profiles that range from rape and murder all the way to things that would make them the inspiration of Eli Roth’s next movie. There names are Jerome Valeska, Arnold Dobkins, Robert Greenwood, Barbara Kean, and Aaron Helzinger. Some of them we already know. Gordon and company are completely at a loss as to who helped them get out. Pick a criminal any criminal if they didn’t do it they know who did.

After the fun little rooftop game they go back to Galavans apartment. Galavan has been nice enough to make them breakfast. Galavan explains that soon they will be the newest Gotham celebrities. Jerome lets that crazy evil laugh of his loose. Barbara is bitching because she didn’t get to go out and play in all the psycho games. Galavan tells her as soon as she enlightens him with all she knows about Gordon she can.

Alfred and Bruce are in the cave. Bruce is super elated because he can now expose what’s been going on with Wayne Enterprises. Bruce starts up a computer. Alfred rather calmly takes a hammer and demolishes the computer. Bruce is not happy. Alfred tells him that computer would surely spell the end of Bruce and he is just protecting him. Alfred is also disturbed by the blood, bullet proof vest and weapons in the cave. Hmmmmm…. Bruce in turn fires Alfred and tells him he is to never return.

Over at Galavans place crazy 1 (Greenwood) and crazy 2 (Jerome) are fighting over a sword and a chainsaw. Galavan tells them that playing Russian Roulette for team captain of Maniax would be way more fun and awesome. They are in and after a few empty clips to the head three of which Jerome was more than happy to take in a row Galavan decides Jerome should be in charge. Greenwood is down with it ….most likely because it beats a bullet in the head.

Gordon stops by Harvey’s favorite bar and ask him for help. Harvey’s girlfriend gives a solid hell to the no. As Gordon is leaving Harvey suggest he check out the Shipyard. Of course the Shipyard because that’s where Jerome would go seeing that his father was a sea captain. Talk about daddy issues.

Maniax are harassing a bunch of cheerleaders who they have cuffed to the bus. Jerome is trying to explain to the girls why he is an agent of chaos. They decide to cover the whole bus with the girls still inside with gas. Then just when you think it’s about to go up in flames they run into a teeny problem… their lighters are broke.

Gordon and company arrive and save the girls…. Because like the old saying goes save the cheerleader save the world. Jerome and his band of merry psychos escape minus Dobkins. Gordon cuffs him and begins the tedious task of playing 21 questions. Gordon ask who busted him out of Arkahm. Before Dobkins can answer he gets a bullet to the head. Thanks to Tabitha. Thus ending Gordon’s questions and the life of the only person who could have given him the answers he needed.

Alfred is actually on his way to the train station and out of Gotham. Bruce shows up and tells Alfred he knows he just wanted to protect him. Bruce tells Alfred he will never convince him to stop looking into his father. Alfred assures Bruce that he is on his side. Alfred warns Bruce what he is doing is very dangerous. I wonder if Alfred already knows and just doesn’t say anything. Bruce wants Alfred to come back. Alfred agrees and with that all is well. Bruce tells Alfred he is to fix the computer he broke. Sure….. Whatever.

Later Alfred goes to a bar and meets with someone named Lucius Fox. Alfred tells him a story that ends with him killing Lucius if any harm comes to Bruce. Lucius assures Alfred he only has good intentions when it comes to Bruce.

Gordon’s back at the office and he gets a call from that nut job Barbara….guess it’s her turn to play. Gordon does his best I’m sympathetic to you and your needs and clearly you are a good person that’s just misunderstood routine. Barbara laughs out loud. Gordon notices her laugh seems to echo and looks up to see her on the pay phone. Barbara takes off and Gordon follows. Gordon gets knocked out.

Soon as he is out the door Maniax comes in and starts shooting.

Gordon finally manages to catch up to Barbara. Barbara says its a little late for chit chatting and then a Maniac precedes to beat the hell out of him. After watching for way longer than necessary Barbara tells the guy to stop. Barbara then sits on top of Gordon, clarifies that she isn’t sick in anyway and kisses him on his bloody face and with a hop, skip, and a jump Barbara is gone.

Over at the police station everyone is pretty much dead. Essen isn’t but she is headed there. Jerome shoots her on camera. Before Essen takes her last breath she tells Jerome that soon enough he will be dead and no one will ever remember his name. No kidding….. he won’t be Jerome for much longer. Jerome shoots Arnold for stepping over his line which is just an excuse because Essen hurt his feelings. For anybody keeping count this leaves only Aaron, Barbara, and Jerome alive.

Gordon comes back in the station and finds maybe three people alive. He runs over to Essen who informs him it’s a new day. Them she dies. Is this Gotham or Gone With the Wind?

Lucius is trying to fix the computer for Bruce.

Alfred comes running into the cave to tell Bruce about the attack at the police station. They haul ass to get there so they can check on Gordon. Bruce runs to him and hugs him. Harvey’s back. With a badge?!?!

The news show comes on. Jerome comes on camera and explains that everyone is a prisoner of sanity. Jerome wants everyone to be free like Manix. Jerome ends by saying “You ain’t seen nothing yet.”