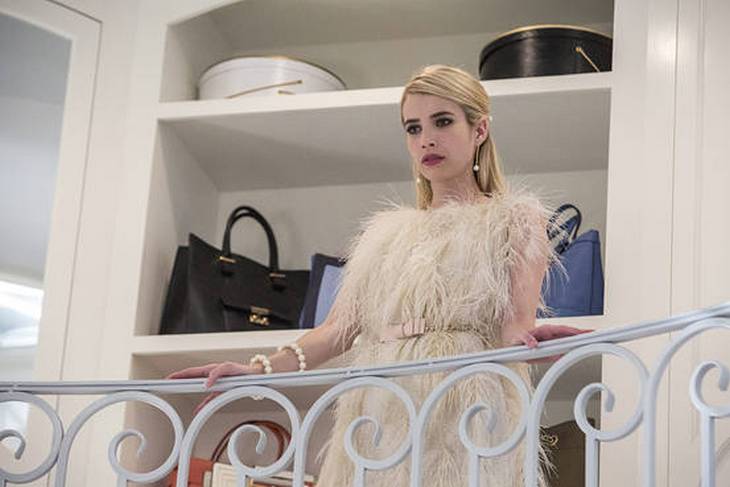 Catch up on your favorite horror comedy with this recap and review of Scream Queens Season 1, Episode 2 ‘Chainsaw’. Get the latest on top TV shows with all of Hollywood Hiccup’s recaps by clicking here…

What I learned from last weeks episode of Scream Queens:

Nick Jonas doesn’t mind helping the Red Devil one bit.
Lawn Mowers make excellent head removers.
Some girls would rather post a Facebook status than run for their lives.
Zayday will slap a bitch so hard her tampon will fall out. Can’t wait to see what new things I learn this week.

Zayday and Grace are just chit chatting it up in a convenience store without a care in the world. The discussion is all about Pete and how Grace is sure she misjudged him and he just can’t be the killer plus he is like so dreamy and stuff. Then someone in a Red Devil costume appears in front of them. Grace isn’t taking any of this guys shit and tazers his ass. When the mask comes off they learn its just some idiot from school named Eugene.

Chanel meanwhile is checking to make sure that Chanel No. 2’s dead body is in the freezer. Unfortunately for her it isn’t. Also unfortunate for her as it turns out Chanel No. 5 knew it first and just wants to inform Chanel she is out when it comes to her bird brain ideas. Also Chanel No. 5 got it on with two guys that go by the names Roger and Dodger. Chanel never one to take criticism well informs her that she will make her life a living hell….. Which works out perfectly what with a devil running around and all.

Zayday and Grace decide to look into the disappearance of Chanel No. 2. When they find a red stain on her carpet they call in Denise who wisely informs them that a red stain is always blood and is literally never ketchup 0% of the time. Good to know. Grace and Zayday tell Denise the other girls insist she went back to Bel-Air. They also tell her that she is still posting pictures on her Instagram. They show Denise a picture of her propped up in a odd position with sunglasses on. OMG it’s like weekend at Bimbos…lol. They decide they will go to Bel-Air.

The girls decide to go to a rally during which they find out no one on campus wants to be within spitting distance of them because you know Red Devil. They even make it painfully obvious with signs that point out they are not part of that sorority. Chanel sees Chad talking to Earl Grey about Boone’s death….which of course we know is misdirection at its devilish finest. Chanel finally cuts to the chase and tells Chad she would like to hook back up. Chad declines seeing as how she is now the leader of the worst sorority in the history of history like ever. Chad tells her every time he would sex with her he would see the ugly pledges. Nice guy that Chad.

The three musketeers head to Chanel no. 2’s to see if she might be there. She isn’t but her worried sick parents who think she is on another drinking binge are. They also drop the bomb she had a “thing” with Chad and he spent Thanksgiving with them. The parental’s even have a note he wrote to their daughter.

Sam and Grace are taking Intro to Film Analysis. The teacher Wes is Grace’s father. Wes and Grace argue and Grace takes off. Wes shows the class Texas Chainsaw Massacre ….of course he does…. because why not? Wes says the movie implies one is angry and decides to take it out on the world. Gigi sneaks in and invites Wes to go on a neighborhood watch with her. The Dean comes in and makes plans to meet Gigi at the tennis court because she needs to speak with her.

Aaron is in the Coney costume. He is excited to be the mascot. When he gets to his room he is greeted by the Red Devil who slices him up. Looks like it’s back to the old Mascot drawing board.

Hester is caught in Chanel’s closet. Hester tells her she always wanted to be the height of fashion but the neck brace prevented it. Chanel gets the idea to give Hester a makeover so that she can get Chad back.

Munch and Gigi are playing tennis when Munsch tells her that they need t move back into the house with the girls to keep a watchful eye on them. Munsch also warns her to keep her hands off of Wes.

Chanel No. 3 no longer able to keep a secret tells Sam that she wants the to be the best of friends like soulmates. She goes on to say that she has a secret she can only share with her soulmate. Chanel No. 3’s secret is that she is Charles Mansons daughter. Listen up writers I’m only able to suspend disbelief for so long….. She ask Sam to be alibi buddies and Sam agrees to do it.

Zayday and Grace tell everyone except Chanel about Chad and Chanel No. 2. Chanel No. 3 and 5 were also apparently bed buddies of his. Chanel comes in with her newly christened Chanel No. 6. Chanel No.5 freaks out and says Chanel has no right being President any longer.

Munsch and Gigi appear and tell the girls they are moving in. It doesn’t go over well.

Chad calls a meeting with the rest of the guys and let’s them know that A Boone was gay and B he thinks he was murdered. Chad suggest they all do some steroids and then proceed to run around town like a bunch of college boy assholes in Ed Hardy t-shirts until the Red Devil appears so that they can kick his ass.

Grace goes to see Pete and apologizes for treating him like crap. Grace tells him she thinks Chad is the killer. Pete says Chad would have no motive. Grace thinks he might be the baby from 1995. Pete tells her he found one of the girls. It’s road trip time.

Chad and company are yelling and breaking shit like they are tough when they see the Red Devil. They are on their way to teach him a lesson when a second one appears also holding a chainsaw. One of them is so going to be Boone. It’s mayhem pretty much. One knocks Chad out and another one loses his arms protecting Chad. The two Devils hightail it out of there and no doubt do a high five and happy dance when they are out of sight.

Denise arrest Zayday and accuses her of being the killer. Denise has this convoluted tale about how Zayday could be in on it. As crazy as it is she does get the fact that are two people responsible correct. Denise brings up Zayday’s love of How to Get Away With Murder and the fact she has a chainsaw under her bed. Zayday tells her it was a gift from her grandmother. She felt Zayday needed protection after her tazer was taken. Denise believes her and let’s her go.

Gigi and Wes have a date…..with Munsch.

Zayday is channeling her inner Darryl Dixon with the chainsaw. On her way to philosophy class Wes sees her and ask about Grace. Zayday says she has no idea where Grace is. Wes has a mini heart attack and starts looking for his daughter.

Grace gets a call from her dad and lies to him. She claims she is at the library.

Looks like Munsch and Gigi will be sharing a room. Munsch like to listen to whales in order to fall asleep. Gigi ask her to change it. Munsch changes it to slasher movie sounds. Gigi can’t take it and goes downstairs to sleep on the couch because that’s safe.

Gigi’s head barely hits the pillow before the Red Devil appears with his trusty chainsaw sidekick. Gigi starts screaming. The screams wake Wes who was sleeping outside in his car awaiting for Grace to comeback. Wes books it inside. The Red Devil stabs him in the arm for his troubles. Gigi manages to get the Red Devil down. The girls come running down. Gigi and Wes tell them to call the police. When they turn back around all that’s left is the chainsaw. The Red Devil has disappeared.

Munsch comes flying down the stairs next. Wes grabs the chainsaw and points it at her and orders her to stay back because she is the killer.