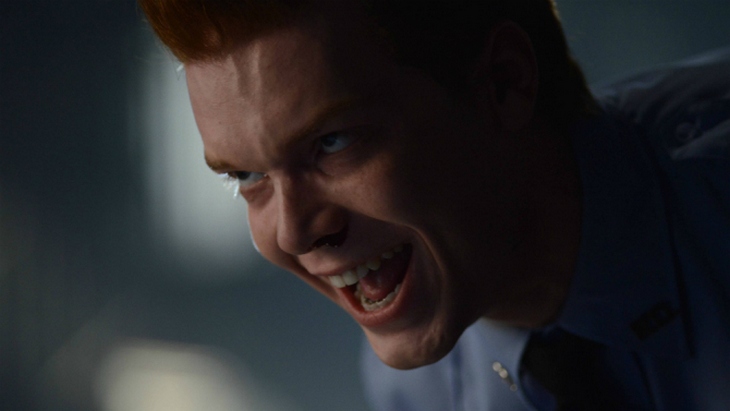 Here is the Gotham recap and review for season 2, episode 3 – ‘The Last Laugh’. Click here to check out all of Hollywood Hiccups television show recaps and reviews…

Gordon is with Bullock and because these two are clearly above the laws they consistently claim to enforce they are beating the crap out of some poor guy and demanding info on Maniax. The guy tells them he doesn’t know anything. They guy says he will help by letting people know they are looking for information. Gordon says for the guy to be sure to let everyone know that Jerome killed his friend and anybody that helps him is as good as dead.

Galavan meanwhile is on his way to see Barbara and he comes bearing sweets. Speaking of sweets Tabitha gives Barbara a kiss. Tabitha takes off and Galavan has a talk with Barbara. Galavan tells her that his family built Gotham. That they carved the rock on which it stands. And there is not a bridge, an alley, or ditch that carries their name. Galavan tells her his family was betrayed, their legacy erased and he is there to punish the ones who wronged his family and reclaim what is his. Wait…..Galavan is the Architect? Galavan tells Barbara he will be more than happy to help her destroy Gordon when his usefulness runs out.

Harvey is confident the Penguin will know where Maniax is. Truth be known the Penguin is the only one who has the right idea this week. It becomes apparent when he makes the statement “It’s just chaos for chaos’s sake.”

Leslie drops by and invites Gordon to her Children’s Hospital Gala that night. Gordon declines at first but reluctantly agrees when Leslie points out a night away from all this madness might do him some good.

Jerome takes Tabitha along with him to see his father and take a stroll down demented lane because insane is as insane does. After knocking him around for awhile Jerome tales of his fairytale childhood in which his mother would get hammered with men and then beat the crap out of him. He says his dad told him to quit whining and man up. Jerome wisely did and now can thank his father for the lunatic he has become. Jerome ties his father up and then implicates him his escape from Arkham. Jerome’s father tells him that he is nothing more than a curse upon Gotham and his legacy will be death and madness. Jerome is about to kill his father when the Calvary arrives. Jerome settles for stabbing him in his eye. Jerome and Tabitha take off. Gordon and Bullock attempt to follow but are knocked down by the gas. Good job Gordon. Jerome wants to shoot Gordon but Tabitha stops him by reminding him that Gordon is much more fun to play with alive.

We find out as the Gala gets under way that Alfred has a thing for Leslie. We also find out that Selina was happy to see Bruce until he questioned her motivation for being there.

Galavan is with Barbara. Galavan matter of factly tells her if Gotham wants a hero he will give them one.

Later Jerome is at the Gala pretending to be the magician.

Leslie gets asked out by Alfred and just when it looks like she might say yes Bruce comes storming in straight off his Selina diss demanding that they leave. Alfred convinces him to stay.

The Gala begins and Jerome ask if they wanna see a magic trick. Jerome has Bruce come up and he proceeds to cut him in half. Jerome makes a joke or spot on fact depending on how you look at it about Bruce having split personalities.

Bullock decides he needs to go home and take a siesta after getting gassed earlier.

Jerome wants the Deputy Mayor to be his next helper. His assistant takes off her mask and looks at Leslie. It slowly sinks In that it’s Barbara. Leslie calls Gordon and ends up getting grabbed halfway through her call.

Jerome meanwhile is still playing magician when all Hell breaks loose. Gunman here there and everywhere. The Deputy Mayor gets taken out in the midst of it all. Bruce wants to find Selina and Leslie gets stuck on the spinning wheel of death. Just your average night in Gotham.

Galavan appears out of thin air and pleads with Jerome to take him as his hostage and let everyone else go.

Before the police come in Selina slips away. She offers to let Bruce go with her but he declines. Bruce is concerned for Alfred.

Meanwhile Jerome is playing with a water gun while Leslie and Barbara are throwing insults back and forth.

Jerome wants to kill Bruce. Bruce stays out of sight until Barbara says they should kill Alfred. Bruce runs into Gordon who gives him a gun to hand off to Alfred. Bruce comes out and Jerome lets Alfred go.

Galavan then decides to stab Jerome in the neck. Jerome whispers with his dying gasp that this wasn’t part of the plan. He probably just didn’t get the memo. Jerome dies with a over the top smile on his face.

Galavan is naturally hailed as a hero. All’s well that goes well.

Bullock pays a visit to the Penguin. Bullock ask if it’s true that Gordon killed someone for him. Penguin won’t give Bullock a straight answer. Bullock suggest the Penguin stay as far from Gordon as he can get.

Gordon is prod of how brave Bruce was. Alfred is the opposite and displeased that he risked his own life. Bruce thinks as long as he can count on Gordon he will be ok.

Galvan lets Gordon know if he needs anything he is merely a phone call away.

Alfred gets his flirt on with Leslie and then is crushed when he sees her plant one on Gordon.

Back at the Police Station Gordon takes over Essen’s office.

Gotham can’t decide who is the hero Galavan or Jerome. Barbara clearly thinks it’s Galavan from the way she is kissing him. Tabitha looks on in displeasure.

Meanwhile we see Jerome’s effect on the people of Gotham from some guy sitting in a bar to a man laughing the whole time he is killing someone. Guess dear old dad was right about the death and madness bit. Which one is the Joker is my question …. time will tell.