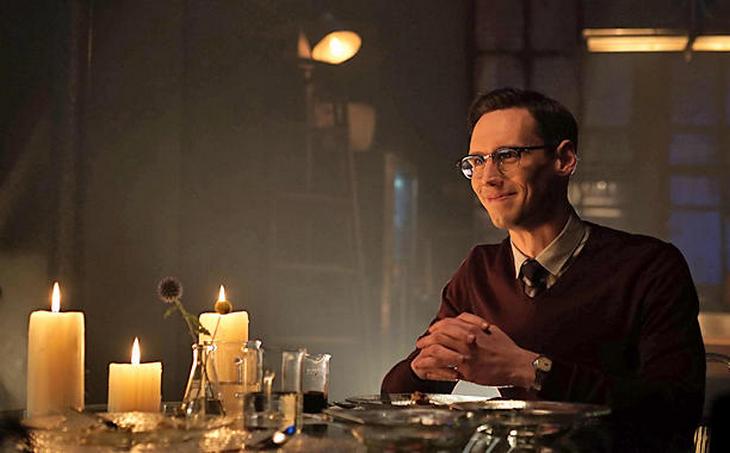 Here is the Gotham recap and review for season 2, episode 4 – ‘Strike Force’. Click here to check out all of Hollywood Hiccups television show recaps and reviews…

Penguin has a meeting of Gotham’s finest criminal types going on. Penguin wants to know if any of them are aware of who helped the crazies break out of Arkham. I guess Gotham has fallen into even more chaos (like that’s even possible at this point) since the inspiration for the Joker came,saw and then bit the big one. Penguin lets them all know they have to get his permission to do so much as sneeze. Tabitha strolls in and announces to Penguin that her brother would like to have his very own meeting with him.

Meanwhile, Barnes (Michael Chiklis) shows up as the new large and in charge Officer at the police department. After a speech about taking the high road and a bunch of other goody goody stuff he starts firing the cops he believes are corrupt. I see what’s going on here… Vic from the Shield got hired by Galavan. Barnes informs Gordon that even though he has his doubts about him he is still making him second in command. See what I mean….it’s all to perfect a scheme. Harvey for once gets my full support when he tells Gordon to keep a eye on Barnes because no one walks along the straight and narrow in Gotham.

Penguin meets with Galavan who rather smugly tells penguin he is the reason Gotham is at its craziest. Galavan orders the Penguin (under the guise of asking for a favor) to clear out areas for him to put up new buildings and to make sure anyone who runs for the Mayors seat be taken out so that Galavan is sure to win. Penguin is miffed that Galavan acts as if he is the top dog er….. ummmm…. bird !?!? Penguin refuses to help. Tabitha proceeds to turn on a TV. Penguin realizes soon enough that Galavan has kidnapped his mother. Galavan tells him if he refuses to do as he has been told he will kill her.

Barnes has a brilliant plan that involves hiring cadet’s from the police academy( no not that police academy). Barnes thinks this is a sure fire way to make sure that they aren’t corrupt. Gordon thinks hiring someone that young is a mistake. Barnes says it’s not like they have anything to lose.

Meanwhile after a cleverly planned fake drive by the Penguin had carried out Galvan announces his intention to run for Mayor of Gotham City.

In the mean time in between time the Penguin stabs Caulfield to death. Butch makes sure her employees know if they are questioned its in their best interest to zip it, lock it and put it in their pocket.

Bruce is back at school per his agreement with Alfred. Speaking of Alfred he has a little run in with Selina which results in a slap across her face. I know I know I can’t believe the butler did it either). Alfred then warns her she better steer clear of young Mr. Wayne. Before who start feeling bad for our love lorn little superhero in training let me point out that Galavan introduced him to his niece Silver and Bruce couldn’t be happier. Bruce finally appears for his ride home but is thrown a curve ball when Alfred hands him a change of clothes and tells him he can run back to the house as part of his training that he so eagerly agreed to.

Over in Nygma land he ask Ms. Kringle on a date. She agrees and he makes her dinner. He ends up talking to himself ala Jekyll and Hyde style and explains to her that he hears a voice that tries to keep him in check. Since Ms. Kringle has a thing for guys who have more than one side to them she kisses him.

Gordon is with Bullock and Barnes when they find out about Caulfield’s untimely demise. They take off to the scene of the crime and talk to someone who clearly didn’t get the memo about zipping it. The witness tells them that the guy who killed her was wearing fancy clothes and walked strangely. Gordon instantly knows it was Penguin who did it.

Penguin who I guess just wants to kill all the candidates in one day is now trying to take out Hobbs. Penguin tries to explain to Butch its all just a matter of what he has to do to get his mother back from Galavan. In the midst of Penguins confession Zsasz shows up and bodies hit the floor. Hobbs takes off and Zsasz catches up to outside. As usual Gordon shows up in the nick of time. Zsasz who ends of getting a shot of his own shoots a fire hydrant and manages to escape in the confusion that follows.

Gordon decides to pay the Penguin a visit and ask him why he is messing with the Mayoral Election when he has his own little kingdom to rein over. Penguin isn’t willing to give Gordon the answer he seeks. Gordon tells him with the new cop in town all bets are off and anything can happen including the Penguin going down. Penguin reminds Gordon about the murder he committed as a favor to him. Penguin ask what would happen if he found out about that. Gordon tells him he is willing to pay his dues if he is found out. Penguin tells Gordon he feels the same. Gordon leaves.

Barnes tells the newly minted strike force of newbies that their first mission is to put Penguin behind bars.

Turns out all this is going according to Galavan’s plan.

Butch is doing his best to find Penguins mother for him but so far he is coming up empty.