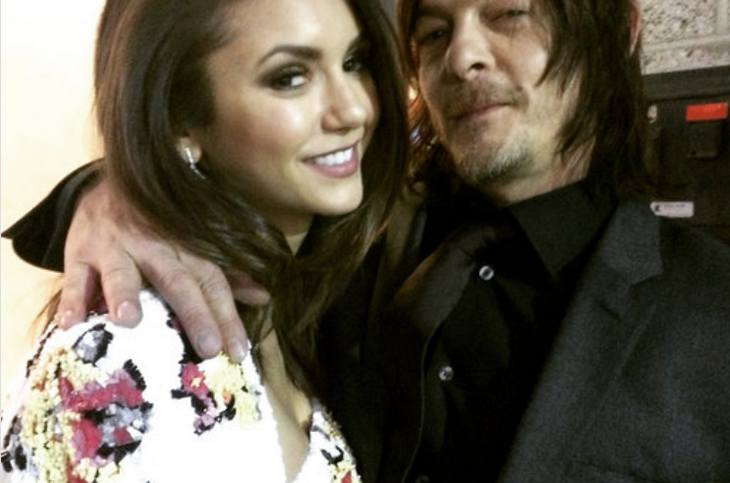 “The Vampire Diaries” rumors are indicating that Nina Dobrev – former Elena Gilbert – is desperate for a role on the AMC zombie drama “The Walking Dead.” Nina Dobrev announced at the beginning of this year that she was quitting “The Vampire Diaries” to devote her time to movies, however she still hasn’t landed any major roles. So, she might be lowering her standards a bit and ready to return to the small screen.

Nina Dobrev posted a photo on Instagram of herself posing with “The Walking Dead” star Norman Reedus, who plays the part of the VERY popular character Daryl Dixon. According to a report from Celeb Dirty Laundry, the rumor mill is swirling with talk that Nina Dobrev may have joined “The Walking Dead,” or is trying hard to get a spot on the cast – and is doing so by cozying up to Reedus.

Let’s be honest, if Norman Reedus puts in a good word for anyone, they are getting hired by “The Walking Dead” producers most likely on the spot. They will go above and beyond to keep the fan-favorite actor happy. Casting Nina Dobrev wouldn’t be the worst move – if you think about it, “The Vampire Diaries” and “The Walking Dead” have a pretty similar fanbase. And, Nina has a ton of loyal “Vampire Diaries” fans that will most likely follow her to the AMC drama.

What do you guys think? Would you like to see Nina Dobrev on “The Walking Dead?” DO you think she will be able to flirt her way on to the cast via Norman Reedus? Let us know what you think in the comments below!