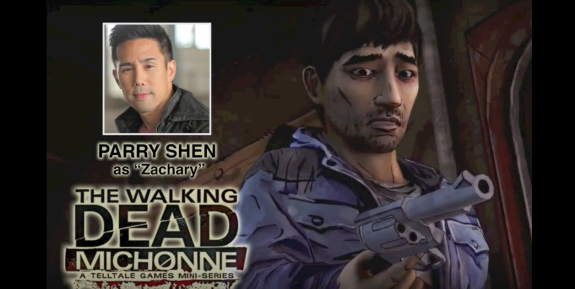 Parry shared the news with “GH” viewers on Twitter. “Save me or kill me! My fate’s in your hands in THE WALKING DEAD: MICHONNE – available now on all platforms!” Parry then shared link to a YouTube preview for the video game.

“The Walking Dead: Michonne – A Telltale Miniseries stars the iconic, blade-wielding character from Robert Kirkman’s best-selling comic books. Haunted by her past, and coping with unimaginable loss and regret, the story explores Michonne’s absence between issues #126 and #139 of the comic book.”

Are any “General Hospital” fans “The Walking Dead: Michonne” players? If you’ve never seen the video game series you can checkout Parry Shen as Zachary in three-and-a-half minute clip on Parry’s Youtube channel.

It’s nice to know Parry Shen has been hard at work with other acting projects, but viewers are glad to have Brad and Dr. Lucas Jones [Ryan Carnes] back on “GH.” It’s time for the couple to get married now that Rosalie [Linda Elena Tovar] is out of the picture.